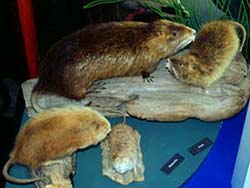 Nutria fur coats are fetching high prices throughout the US, an economic attraction that spurred the import of Nutria to the US from their native South America (Argentina, Uruguay, Paraguay, and southern Brazil) starting in 1899. In places like Louisiana, wild populations were started with releases from fur farms, but some were deliberately released into marshes to control aquatic vegetation. In fact, the first nutria brought into Maryland came to the Fur Animal Field Station at Blackwater National Wildlife Refuge in 1939, where they were kept in outdoor enclosures in the marshes. By 1979 they were well established along the Eastern Shore of Maryland and Virginia with isolated occurrences along the Potomac River and Patuxent Rivers. Today there is a limited market for the fur, and major control efforts are underway to eliminate Nutria and protect marsh grasses in areas like Blackwater National Wildlife Refuge.

Myocastor coypus (Nutria) is native to South America. The subspecies M. c. bonariensis, native to Argentina, Uruguay, Paraguay, and southern Brazil, is the form which has been widely introduced (Gosling and Baker 1990). Myocastor coypus was first imported into CA in 1899 in an attempt to establish a fur farm. During the 1930's, several attempts were made to start Nutria fur farms in various parts of the United States but these failed due to poor reproductive success and low fur prices. In 1937, E. A. McIlhenny imported 13 M. coypus to Avery Island LA in order to start a fur farm. He released some 21 aninals in 1940, and others in later years. Many other animals probably escaped from other fur farms in the area (Bernard 2002). Myocastor coypus spread through AL, GA, MS, TX, and FL in the 1940's and 50's, assisted by frequent local escapes from fur farms. Some deliberate releases were made for the control of aquatic vegetation (Kinler et al. 1987; McCann et al. 1996). By 1983-84, feral M. coypus were established in 15 states, with major population centers around Chesapeake Bay, southeast VA-northeast NC, the Gulf Coast from FL to TX, and western OR-WA, 'In the United States, all significant M. coypus populations are in coastal habitats' (Kinler et al. 1987).

Myocastor coypus have been widely introduced around the world, with established populations in England (Gosling and Baker 1990) and elsewhere in Europe, Russia, the Middle East, Africa and Japan (Kinler et al.1987).

Myocastor coypus were first brought into MD at the Fur Animal Field Station at Blackwater National Wildlife Refuge, Dorchester County in 1939, where they were kept for experimental purposes. Some animals were kept in outdoor enclosures in the marshes. In the spring of 1943, 5 escaped M. coypus were killed in a nearby boathouse. Several landowners in the vicinity also released M. coypus. In 1956, an eradication program was begun on the refuge, and in 1960-61 a heavy freeze killed many animals (Paradiso 1969; Willner et al. 1979). By 1969, Paradiso considered that 'the Nutria in Maryland marshes are only precariously established.'

However, in the late 60's and 70's M. coypus populations increased again, despite a population crash due to severe weather in 1976-77. By 1979, they were established along the Eastern Shore from Eastern Neck (Kent County) south to to the VA border, with smaller populations on the Western Shore along the Potomac River and Patuxent River (Willner et al. 1979). In VA, they were reported as abundant around Back Bay, just south of the Chesapeake Bay mouth (Wass 1972). According to Reshetiloff (1994), 'Around the Chesapeake, M. coypus are found mainly on the lower Eastern Shore counties of Maryland, but have been found in Patuxent and Potomac Rivers in the past'. In 1994, the M. coypus population was estimated at 100,000 animals (Anonymous 1994). An eradication program has been under study for M. coypus populations on the Eastern Shore of Chesapeake Bay (Anonymous 1994). Trapping began in January 2002, and eradication in the Blackwater National Wildlife Refuge was expected to take 3 years (Bounds and Mollett 2000). Nutria were eradicated from Blackwater National Wildlife Refuge by November of 2004 (Fahrenthold 2004), and eradication efforts have continued on the Eastern Shore. By July 2009, 12,000 nutira had been killed. As numbers of the nutria decrease, locating the survivors becomes more difficult. Use of radio-tagged animals is being considered to locate the remaing survivors. Access to private property has been a problem, but most landowners have cooperated. (Cooper 2009; Mike Haramis, Stephen Kendrot, personal communications; Frears 2011). As the population decreases, detection became more diffiuclt. Hair snares were found to be more successful than remote camers for detection (Pepper et al. 2016).

Myocastor coypus (Nutria) were introduced to Chesapeake Bay as fur animals, but there has been little demand for their fur. Consequently, this species has provided a very small benefit, while adversely affecting marsh habitats, waterfowl, and a more desirable furbearer, Ondatra zibethicus (Muskrat).

Fisheries - 'Only recently have Maryland trappers begun to harvest substantial numbers of Myocastor coypus. This is becuse Maryland trappers previously had equipment specifically to harvest muskrats and not the much large Nutria. As Myocastor coypus populations in Maryland increased, more and more trappers purchased larger traps with which to harvest Myocastor coypus' (Willner et al. 1979). However, frequent heavy mortalities due to severe winter weather may limit the trappers' investment (Willner et al. 1979). As of 1994, 'At present there is almost no commercial fur market and only a very small meat market. This situation, combined with M. coypus' reproductive success, has led to a boom in their population' (Reshetiloff 1994). In 1986-87, the total value of M. coypus pelts from MD wetlands was $822 (Tiner and Burke 1995).

Costs to Fisheries- Myocastor coypus have been responisble for extensive habitat change, conversion of marsh to bare mud or open water, affecting fish and waterfowl habitat and feeding and nursery areas (Kinler et al. 1987; Willner et al. 1979). They may compete for food with O. zibethicus. This competion is considered insignificant in brackish marshes in MD (Willner et al. 1979), but may be more important in fresh and tidal fresh marshes where their plant preferences may overlap more (Kinler et al. 1987). Myocastor coypus also evict O. zibethicus from their lodges during winter, possibly affecting the native rodents' survival in severe weather (Reshetiloff 1994). They damage weirs protecting impounded marshes on wildlife refuges, through burrowing.

A control program relying heavily on bounties was proposed by the MD Department of Natural Resources, and initally scheduled to begin in 1994, at an estimated cost of 2.3 million dollars. However, advice from L. M. Gosling indicated that bounty hunting might be ineffective. The estimated cost of the revised program was 4 million dollars, resulting in postponement 'for up to two years' (Anonymous 1994). A 3-year pilot M. coypus management program has been proposed (Bounds and Mollett 2000), including marking and tracking of animals, continued experimental assessment of grazing, and capture of M. coypus by professional trappers. This program began in 2003, eliminated nutria from Blackwater National Wildlife Refuge by November 2004, and continues through 2009 (Fahrenthold 2002; Cooper 2009, Mike Haramis, Stephen Kendrot, personal communications 2009 )

Boating - Myocastor coypus may cause damage to river banks, dikes, levees, through burrowing (Gosling and Baker 1990).

Habitat Change - See 'Ecological Impacts'. Damage to marshes, levees, and river banks may also affect nearby houses and other property (Gosling and Baker 1990).

Economic Impacts Outside of Chesapeake Bay

Myocastor coypus (Nutria) were originally imported widely as fur animals, and in some countries deliberately released in order to start feral populations. However, the quality of their pelt was not highly regarded, and in the United States and elsewhere, many M. coypus farms failed in the 1940's due to lack of demand (Kinler et al. 1987), probably resulting in many deliberate and accidental releases. Some deliberate releases were made in FL and elsewhere for control of aquatic vegetation in canals, but these populations were soon regarded as nuisances, damaging crops and desirable vegetation (McCann et al. 1996).

The harvest of M. coypus pelts in LA amounted to 1.3 million pelts per year for 1977-84, ~6 million dollars, and about 53% of LA's fur production (Kinler et al. 1987). Kinler et al. (1987) considered that at the time of writing, the harvest in LA was sufficient to offset most of the economic damage in many areas, but that changes in market demand could reduce the harvest, increasing agricultural and habitat damage.

In Britain, M. coypus ('Coypu') is regarded as an unmitigated nuisance because of damage to dikes, riverbanks, levees, agricultural crops, and wildlife habitat, and was subject to an eradication program. About 34,000 animals were trapped in east Anglia, and by 1989, the species was believed to have been eradicated from Britain (Gosling and Baker 1990). Negative impacts have been noted also in the Netherlands, Germany, Russia, and Turkey (Lever 1985).

Myocastor coypus (Nutria) have reached high densities on the Eastern Shore of Maryland, and are regarded as a serious threat to the native biota of tidal marshes, and to the function of the marsh ecosystem

Herbivory - Grazing by M. coypus appears to have had significant effects on plant abundance and species composition in much of its introduced range. On the lower Eastern Shore of the Chesapeake Bay, Willner et al. (1979) noted bare areas formerly covered with Schoenoplectus americanus. Exclosure experiments show that exclusion of M. coypus permits revegetation of these areas (Haramis and Colona 1998).

Similar impacts have been observed in other parts of M. coypus' introduced range. In fresh and oligohaline marshes of the Pearl River LA, total above-ground plant biomass was reduced by 30% in plots exposed to M. coypus grazing compared with exclosures, but species richness was not affected (Taylor et al. 1995). This is surprising given M. coypus' strong food preferences, but Taylor et al. (1995) explained the apparent lack of selection by wasteful feeding. In other areas, favored plant species, such as Schoenoplectus sp. (bulrushes), Sagittaria latifolia (Broadleaf Arrowhead), and Spartina cynosuroides (Big Cordgrass) were replaced by less favored plants (Kinler et al. 1987). In Britain, Typha spp. (Cattails) were largely replaced by Phragmites australis (Common Reed), and some other favored plants [Rumex hydrolapathum (Water Dock); Cicuta virosa(Cowbane)] were all but eliminated (Gosling and Baker 1990).

Habitat Change- Myocastor coypus' most significant impact may be converting large areas of marsh into bare mud or open water called 'eat-outs' through grazing. 'We noted broad areas of bare mud in many Dorchester County marsh areas formerly covered with three-square rush' (Willner et al. 1979). In Blackwater National Wildlife Refuge (Dorchester County MD), 6 square miles (1553 hectares) has been converted from marsh to open water, and 53% of the remaining marsh has been damaged (Haramis and Colona 1998). Effects of M. coypus' herbivory have been especially dramatic in LA where the animal's effect on marshes is combined with seawater intrusion due to wells, sea-level rise, and land subsidence (Kinler et al. 1987).

Myocastor coypus (Nutria) have reached high densities on the Eastern Shore of Maryland, and are regarded as a serious threat to the native biota of tidal marshes, and to the function of the marsh ecosystem

Herbivory - Phragmites australis (Common Reed), probably mostly the introduced genotype) is grazed by M. coypus in brackish MD marshes. It is less preferred than Three-Square Rush (Schoenoplectus americanus) but formed 0-33% of the diet (~6% annual average) (Willner et al. 1979). In England, M. coypus grazing has decreased the area of reed-swamps (Gosling and Baker 1990), but in the eastern United States grazing by M. coypus, Ondatra zibethicus (Muskrat), and other herbivores was considered inadequate for biological control of invasive Phragmites australis (Common Reed) populations (Marks et al. 1994). Myocastor coypus also may graze on the introduced Typha angustifolia (Narrow-leaved Cattail), which occasionally is an important food, comprising up to 12% of the diet (Willner et al. 1979).

Cooper, Dick (6/2008) Effort close to exterminating nutria on Delmarva Peninsula: Rodents blamed, in part, for loss of 8,000 acres of marsh at Blackwater Refuge, Bay Journal None: None

Frears, Darryl (10/28/2011) In Maryland, a renewed effort to eradicate swamp rats from the DelMarva Peninsula, Washington Post None: None

Taylor, Katherine L.; Grace, James B. (1995) The effects of vertebrate herbivory on plant community structure in the coastal marshes of the Pearl River, Louisiana, USA, Wetlands 15: 68-73