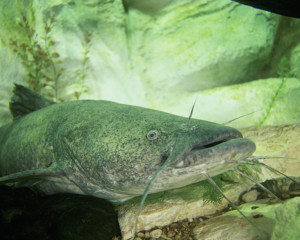 Flathead Catfish are giant fish (up to 60 inches, 130 lbs), and very popular among anglers because of their size and tastiness. They are native to Mississippi and Gulf drainages. These catfish have been stocked or otherwise released into drainages in 18 states. The first Chesapeake release in 1965 was accidental; the Virginia Division of Fish and Game was keeping them in ponds on Hog Island Game Refuge for research when about 50 fish escaped into the James River during a flood. Although only a few fish were released at that time they established sustaining populations. Similarly, only 12 fish were stocked in the Occoquan Reservoir, but that was enough to establish a population. Populations of flathead catfish have been found in many other areas of the Chesapeake watershed, including the Susquehanna River, and it is suspected that small numbers of fish were released by anglers due to their popularity as a sport fish. This species’ ability to colonize river systems, as well as its role as a top predator with an enormous appetite, means that unauthorized stockings by fisherman are a serious problem.

Pylodictis olivaris (Flathead Catfish ) is native to Mississippi and Gulf drainages from PA and ND, south to Gulf, AL to Mexico. Its native range includes a small southern part of Great Lakes drainage (Page and Burr 1991), but it has recently expanded into or has been introduced to Canadian waters of Lake Erie (Goodchild 1993). Releases of P. olivaris on the Atlantic slope were mostly accidental or unauthorized (VA, NC, GA). Pylodictis olivaris has also been introduced to CA, AZ, NM, CO, ID, WA. amd OR. Altogether, P. olivaris has been introduced to non-native drainages in 18 states (Goodchild 1993; Guier et al. 1981; Jenkins and Burkhead 1993; Florida Caribbean Science Center 2001; Page and Burr 1991; Thomas 1993).

Pylodictis olivaris were imported by Virginia Division of Fish and Game (VDIFG) in the 1960s and kept in ponds at Hog Island Game Refuge for research. The first release into the James estuary in 1965 was accidental, due to floods. Pylodictis olivaris were also released, deliberately in the Roanoke drainage to the south. VA populations appear to be established. Although juveniles are rarely caught; sizes of record fishes increased through the 80's (Burkhead et al. 1980; Jenkins and Burkhead 1993). This species seems to have a remarkable ability to start populations from very small stockings (12-50 fish) (Jenkins and Burkhead 1993).

James River- Pylodictis olivaris was accidentally released 1965 at Hog Island Wildlife Refuge (~ 50 fish); a population was established. Catches in the upper James in the Blue Ridge-Allegheny region (starting in 1983) were probably due to a separate, undocumented introduction (Burkhead et al. 1980; Jenkins and Burkhead 1993). Catches of large P. olivaris in the James River were mentioned in ocasionally in fishing columns of the Washington Post in the summers of 1995-2000, though much less frequantly than those of Ictalurus furatus (Blue Catfish).

Potomac River- Twelve P. olivaris were stocked in Occoquan Reservoir, and a population was established (Jenkins and Burkhead 1993). By 2003, according to the Washington Post fishing columns, fishermen were catching them in the mainstem of the Potomac.

Susquehanna River- In July, 2002, several juvenile P. olivaris were caught downriver of Safe Harbor Dam in PA, about 50 km above tidal waters. This species is apparently now established in the river, and can be expected to colonize upper Chesapeake Bay. Fishermen have been asked not to release any fish that they catch. The source of these fish is not known (Pennsylvania Fish and Boat Commission 2002). In 2004, 7P. olivaris were caputrued in the West Fishlift of Conowingo Dam, just above the tidal portion of the Susquehanna (Brown et al. 2005). They are now regularly caught in the tidal Susquehanna and in upper Eastern Shore Tributaries (Garman et al. 2010).

Delaware River- Pylodictis olivaris was first collected in the Blue Marsh reservoir, on the Schuyllkill River, 120 km upstream of Philadelphia PA. This catfish is now established in the Delaware River system (Florida Caribbean Science Center 2002). Currently, this catfish has been collected from the mouth of Delware & Raritan Canal at Lambertville NJ, above the head of tide at Trenton, to Philadelphia (Brown et al. 2005). The fish could have been introduced as a contaminant in a shipment of Ictalurus punctatus (Channel Catfish), but illegal releases by fishermen are much more likely (Brown et al. 2005).

Vector(s) of Introduction- Pylodictis olivaris was stocked in holding ponds at the Hog Island Game Refuge and escaped into James estuary during floods. Subsequent, it was deliberately stocked in Occoquan Reservoir, Potomac drainage (Burkhead et al. 1980). Newly established populations in the Delaware and Susquehanna Rivers may have been introduced with contaminated stocks of Ictalurus punctatus (Florida Caribbean Science Center 2002).

Range Status- This fish is 'expected to spread widely in the James and Roanoke rivers. ...Following establishment, it dispersed rapidly and widely in the Cape Fear River, NC' (Jenkins and Burkhead 1993).

Economic Impacts Outside of Chesapeake Bay

Pylodictis olivaris (Flathead Catfish) is a popular sportfish because of its spectacular size. However, in a number of U.S. rivers, negative impacts are well documented (Fuller et al. 1999). Examples include the Cape Fear River, NC (Guier et al. 1981) and the Altmaha River, GA (Thomas 1993) and other GA rivers (Fuller et al. 1999). Rapid proliferation of P.olivaris and intense predation has led to a decline of smaller, more catchable centrarchids (sunfishes, crappies) and bullheads (Ameirus spp.). Pylodictis olivaris, while an attractive sportfish, are caught by fewer fisherman (Thomas 1993). This fish should probably be regarded as a risky introduction. This species attractions as a sportfish and its apparent ability to colonize river systems from very small stockings (11-50 individuals) means that unauthorized stockings by fisherman are a serious problem (Guier et al. 1981; Thomas 1993). Pylodictis olivaris has been introduced to non-native drainages in 18 states (Fuller et al. 1999).

Impacts of Pylodictis olivaris (Flathead Catfish) in Chesapeake Bay appear to be increasing as the population and range of this predator spreads (Garman et al. 2010). Negative effects of introduction in the James River were not noted by Jenkins and Burkhead (1993). However, the effects of introduced predatory catfishes [Ictalurus punctatus (Channel), Ictalurus furcatus (Blue), and P. olivaris) on Alosa sapidissima (American Shad) are being studied in the James River (Garman 1999, pers. comm.). Introductions to the Cape Fear River, NC (Ashley and Buff 1987; Guier et al. 1981) and the Altmaha River, GA (Thomas 1993), and several other GA rivers (Fuller et al. 1999) have had dramatic effects on fish communities, eliminating or drastically reducing abundance of many middle-level predators such as Ameiurus spp. (bullheads and White Catfish), and Lepomis spp. sunfishes.

Competition - Introduction of Pylodictus olivaris led to decline of other fishes, especially catfishes in NC (Guier et al. 1981). However, the frequency of the large Ictalurus furcatus (Blue Catfish) in the stomachs suggests that the earlier decline of native Bullheads (Amieurus spp. before the study was probably due to predation rather than competition.

Predation - Guier et al. (1981) found a wide variety of fishes in stomach contents of P. olivaris, especially catfishes and centrarchids. Ashley and Buff (1987) noted heavy predation on adult A. sapidissima) during their migration in March and April. Other catfish, including native Amieurus catus (White Catfish), were a major food item. Native Bullheads (Amieurus nebulosus (Brown Bullhead); A. natalis (Yellow Bullhead); A. brunneus (Snail Bullhead) were rarely seen in stomach contents, having apparently been greatly reduced earlier by P. olivaris' predation (Guier et al.1981; Ashley and Buff 1987). Thomas (1993) found that P. olivaris' introduction in the Altmaha River, GA was followed by a dramatic decline in Amieurus spp. and Lepomis auritis (Redbreast Sunfish). There is not much information on the impact of P. olivaris on estuaries, but Ashley and Buff (1987) listed 'crabs' and Paralichthys lethostigma (southern flounder) among the prey found.

Negative effects of the Flathead Catifish's introduction on other introduced species, in the James River were not noted by Jenkins and Burkhead (1993).

Competition - Competition with introduced Ictalurus punctatus (Channel Catfish) and I. furcatus (Blue Catfish) is possible, but predation appears to have been a more important factor in their decline in the Cape Fear River, NC; based on the high frequency of I. furcatus in the stomachs (Ashley and Buff 1987; Guier et al 1981).

Predation - Pylodictis olivaris is not specifically reported to feed on Corbicula fluminea (Asian Freshwater Clam, but did feed to some extent on bivalves. It is an important predator on the introduced catfish I. punctatus and I. furcatus and the centrarchids Lepomis macrochirus (Bluegill), L. microlophus (Redear Sunfish), and Pomoxis nigromaculatus (Black Crappie) in the Cape Fear River, NC (Ashley and Buff 1987; Guier et al. 1981).

Cope, Edward Drinker (1879) The Fishes of Pennsylvania, In: (Eds.) Report of the State Commisioners of Fisheries. , Harrisburg. Pp.

Thomas, Matthew E. (1993) Monitoring the effects of introduced flathead catfish on sportfish populations in the Altmaha River, Georgia, Proceedings of the Annual Conference of the Southeast Association of Fish and Wildlife Agencies 47: 531-538