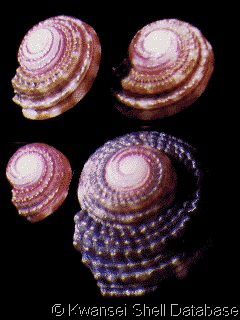 Clanculus ater is a small top shell, which inhabits rocky intertidal habitats. It is native to Japan, India, and the Philippines. Ten specimens were found in Queen Charlotte Sound, British Columbia, Canada in 1964, but no individuals have been reported since. There are no other introduced locations. This species is found in warm temperate-tropical locations, so temperatures in British Columbia may be too cold for it to survive.

* This species is not currently established in North America.

Clanculus ater is a top shell found in warm-temperate to tropical areas. It was described from Japan, and is known from scattered collections from southern Japan, India, and the Philippines (Pilsbry 1901; Museum of Comparative Zoology 2010; Academy of Natural Sciences of Philadelphia 2013). Ten specimens of this snail were found in Queen Charlotte Sound, British Columbia in 1964 (Clarke 1972; Carlton 1979; Carlton 1992). We know of no further introduced records of this gastropod.

Ten specimens of Clanculus ater were collected in August 1964 at the mouth of Codville Lagoon Marine Provincial Park, British Columbia, Canada (52°N) at low tide, on barnacle-encrusted rocks and shells, with typical cold-water native fauna (Clarke 1972). The vector of introduction is not clear. A ballast water introduction is possible from Japanese ships travelling through the Inside Passage. Oyster introductions are not known from the surrounding area around that time (Carlton 1979).

Clanculus ater is a small, dextrally coiled top shell, with a wide conical shape, a low spire, and a nearly semicircular aperture. The shell is marked with spiral cords of rounded beads, which alternate between large and small beads. The sutures are deep. The adult shell has about 6 whorls and a deep umbilicus. The shell color is black, with a rose apex, and a few inconspicuous white dots. Adult shells range from about 7-12 mm in size (Pilsbry 1901).

Snails of the family Trochidae (Top Shells) vary greatly in size, habitat, and geographical range. Specific information is not available for Clanculus ater, but in other species, such as Tegula funebralis (Black Turban Shell, NE Pacific native), and Trochus niloticus (Giant Top Shell, Indo-Pacific), sexes are separate. Both of these species have planktonic, but lecithotrophic, non-feeding veligers, with relatively short (4-21 days) planktonic periods (Moran 1997; Heslinga 1981). However, it is likely that modes of larval development vary throughout the family.

Outside its native Indo-Pacific range, the top shell Clanculus ater is known from only 10 specimens in Queen Charlotte Sound, British Columbia (Clarke 1972; Carlton 1979). This snail has no documented ecological or economic impacts.

Pilsbry, Henry A. (1901) New Mollusca from Japan, the Loo Choo Islands, Formosa and the Philippines., Proceedings of the Academy of Natural Sciences of Philadelphia 53(1): 193-210