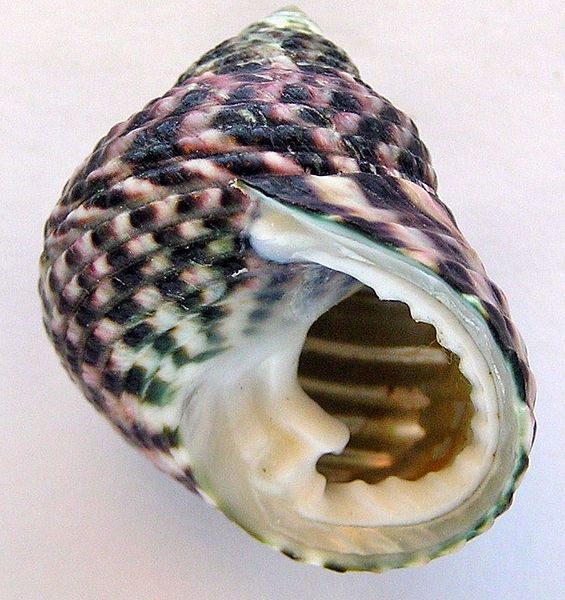 Monodonta labio is commonly known as the Toothed Top Shell. It is native to the Indo-Pacific, from Madagascar and the Persian Gulf to northern Australia, China, and Japan. Introduced specimens were found on newly transplanted Pacific oysters in Samish Bay, Washington in 1947, but a population did not become established. This species grazes on microalgae in the intertidal and shallow subtidal zones of rocky shores and coral reefs.

* This species is not currently established in North America.

Monodonta labio is a marine snail with a wide Indo-Pacific distribution, from Madagascar and the Persian Gulf to northern Australia, the Yellow Sea, China, and south-central Japan (Huang 2001; Iijima 2001; Australian Biological Resources Study 2007; Academy of Natural Sciences of Philadelphia 2013). It was found on newly transplanted Pacific oysters in Samish Bay, Washington by Kincaid in 1947 (cited by Hanna 1966 and Carlton 1979), but a population did not become established. To our knowledge, there are no further reports of this snail outside its native range.

Monodonta labio was reported to be abundant on newly transplanted oysters in Samish Bay, Washington by Kincaid in 1947 (cited by Hanna 1966; Carlton 1979), but a population did not become established. There are no further records of this snail in North American waters.

Monodonta labio is a medium-sized marine snail, with a thick, conical, turban-like shell, sculpted with strong spiral ridges which are broken up into lines of rounded knobs. The body whorl is somewhat swollen, while the previous (penultimate) whorl is less so. The whorls have a rounded keel. The apex is sharp, but it softened or worn away in adults. The columella has a large blunt tooth, projecting into the aperture, while the inner edge of the outer lip is lined by rounded knobs. The lining of the interior of the aperture is nacreous. The color of the exterior of the shell is reddish brown, dark brown, or pale brown, marked with spiral dashes of white, cream, or pink. Adult snails reach 25-40 mm long. Characteristic habitats include the rocky areas of the lower intertidal, shallow subtidal and subtidal regions. Description from Iijima 2001, Australian Biological Resources Study (2007), and Appeltans et al. 2013.

Monodonta labio is not established in North American waters and has no reported impacts.