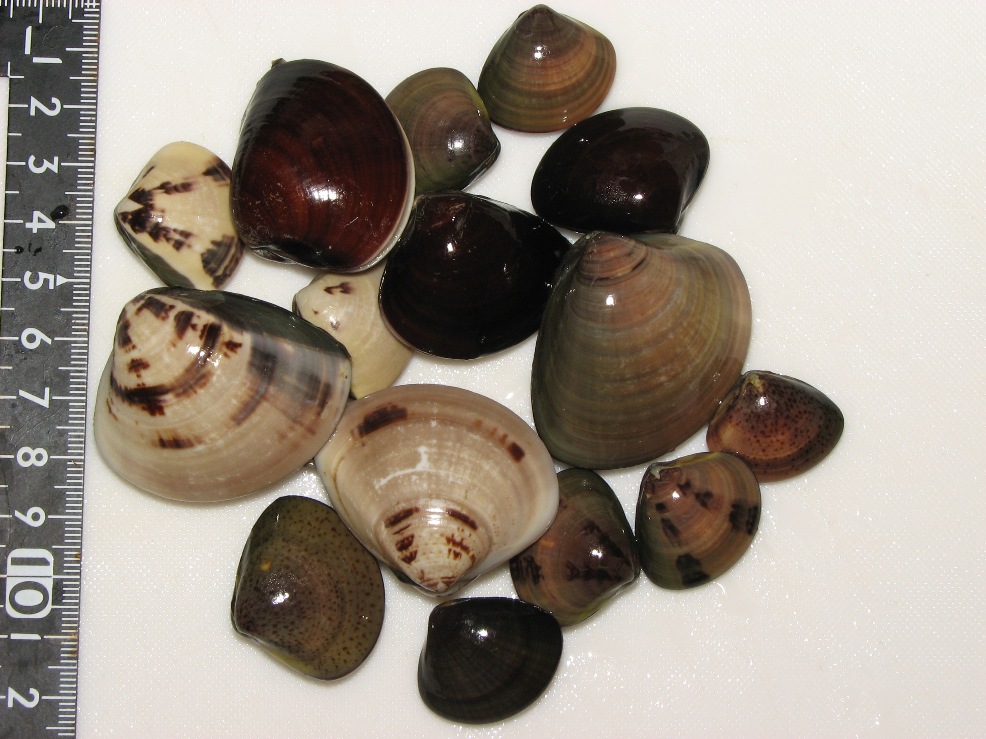 Meretrix lusoria is commonly known as the Asian Hard Clam or the Common Orient Clam. It is native to estuaries and coastal waters of Asia from China, Korea, and Japan. Meretrix clams are heavily fished, and frequently raised in aquaculture in Asian waters. Several attempts have been made to introduce M. lusoria to Hawaii, the West Coast of North America, and Puerto Rico, but as far as we are aware, no populations have become established. No impacts have been reported for Meretrix spp.

Meretrix lusoria is native to estuaries and coastal waters of Asia from China (Hainan to the Bohai Sea), Korea, and Japan (as far north as Mutsu Bay, on the tip of Honshu; Chen et al. 2009; Chung 2007; Yamakawa et al. 2008). It co-occurs with several very similar species, particularly M. petechialis, which was introduced from China into Japan, to supplement declining stocks of M. lusoria, now rare in most Japanese coastal waters (Yamakawa and Imai 2012). Meretrix clams are heavily fished, and frequently raised in aquaculture in Asian waters (Yamakawa et al. 2008; Zhang et al. 2012). Several unsuccessful attempts were made to introduce Meretrix lusoria to West Coast waters (Carlton 1979). At least one introduction was made in Puerto Rico (USGS Nonindigenous Aquatic Species Program 2008; NOAA and Puerto Rico DRNA 2009). An introduction of M. meretrix was made in Kaneohe Bay, Hawaii, in 1926 and 1939, but did not reproduce (Carlton and Eldredge 2009).

Meretrix lusoria was planted in Humboldt Bay, California in 1957 and Grays Harbor, Washington (WA) around 1959. Experimental studies of this clam, which may have included laboratory work and/or plantings occurred at the Washington State Shellfish Laboratory in Quilcene, WA, on the Hood Canal, around this time (Hanna 1966; Carlton 1979).

An introduction of M. lusoria to Puerto Rico is reported to have occurred in Isleta Marina, Fajardo, Puerto Rico in 1990 (USGS Nonindigenous Aquatic Species Program 2009; NOAA and Puerto Rico DRNA 2009).

Clams of the genus Meretrix belong to a complex of many similar species, whose taxonomy is disputed. At least nine species are known from the Indo-West Pacific (Academy of Natural Sciences of Philadelphia 2012), and several of these are morphologically very similar. These clams also show considerable intraspecific variation in shell morphology and coloration. Chen et al. (2009) using sequences from mitochondrial cytochrome c oxidase subunit I gene (COI), concluded that M. lusoria and M. petechialis were juvenile synonyms of M. meretrix. However, Yamakawa et al. (2008) using allozymes and Yamakawa and Imai (2012) and Zhang et al. (2012) both using COI gene sequences, found M. lusoria and M. petechialis to be distinct, though very closely related. Zhang et al. (2012) found that M. meretrix clustered separately from M. lusoria and M. petechialis. Consequently, the specific identification of the 'Meretrix lusoria' introduced to the West Coast and Puerto Rico is uncertain.

Meretrix spp. has a triangular-oval shell, with a strongly rounded ventral margin, but fairly straight dorsal sides, peaking at the umbo. The umbo is slightly anterior of the midpoint of the shell and the anterior side of the shell drops more steeply than the posterior. The pallial sinus is shallow. Shell length in M. lusoria reaches at least 96 mm (Chung 2007). The shell has fine concentric growth lines and a relatively smooth surface. Color is highly variable, from white and brown concentric bands to fine reddish-brown or dark-brown mottling, forming dotted lines, and W-shaped markings (Yamakawa et al. 2008; description from photos in Zhang et al. 2012). Chinese and Japanese guidebooks and experts should be consulted for identification of these clams.

Meretrix lusoria and other clams of the genus are important shellfish species in Asian waters. Meretrix lusoria has become rare in Japanese coastal waters, due to pollution, overfishing, and other unknown factors (Yamakawa et al. 2008; Zhang et al. 2012). The closely related M. petechialis, introduced from China, potentially could adversely affect M. lusoria through predation and competition (Yamakawa and Imai 2012). Attempts to introduce M. lusoria to the West Coast of the US were unsuccessful, as were introductions of M. meretrix in Hawaii (Carlton 1979; Carlton and Eldredge 2009). We have no information on success of an M. lusoria introduction in Puerto Rico (NOAA and Puerto Rico DRNA 2009). No impacts have been reported from Meretrix spp. introductions to the West Coast, Hawaii, and Puerto Rico.