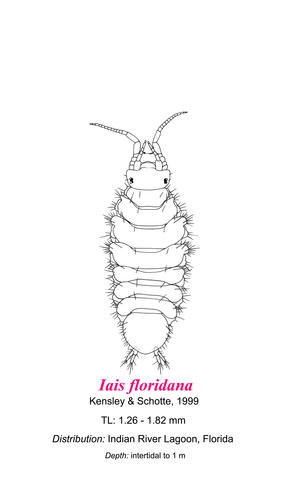 Iais floridana is a small isopod that lives commensally on the pleopods of the larger burrowing isopod Sphaeroma terebrans, a wood-borer in marine and estuarine habitats. Its native range is unknown, but S. terebrans is native to the Indo-Pacific and the two species may co-occur there. Iais floridana is only known from the Gulf and Eastern coasts of Florida, where it was found in the 1990’s, but its cryptic habitat association means it may be overlooked in other regions. Little is known about its ecology and environmental tolerances, but it has been found in areas ranging from 0 to 15 PSU salinity.

The isopod Iais floridana lives commensally in the burrows of Sphaeroma terebrans, an isopod which burrows into mangrove roots and salt marshes (Rehm and Humm 197; Estevez 1995). Sphaeroma terebrans is probably native to the Indo-Pacific, but is now widespread in the tropical and subtropical Atlantic (Carlton and Ruckelshaus 1997). Iais floridana was first collected in Estero Bay, Lee County, on the Gulf Coast, near the tip of Florida, but most collections were made in the Indian River Lagoon (Kensley and Schotte 1999). It has not yet been reported outside of Florida. We suspect that this isopod occurs through much of the range of S. terebrans, and has been overlooked. Iais floridana, like its host, is most likely of Indo-Pacific origin.

At least three species of Iais occur commensally with isopods of the genus Sphaeroma, one example being I. californica, an associate of the New Zealand species S. quoianum. Iais californica was described from S. quoianum introduced to California (Carlton 1979). Iais floridana is closest morphologically to I. singaporensis (Kensley and Schotte 1999).

One specimen of Iais floridana was first collected in Hendry Creek off of Estero Bay, Lee County, Florida, on the Gulf of Mexico, in 1993. In 1996, 14 more specimens were collected at the mouth of the Estero River. All were found on Sphaeoma terebrans (Kensley and Schotte 1999).

Iais floridana has an elongated elliptical body, which is broadest in pereaonal segment 4 and tapered towards the head. Coxal plates are visible in dorsal view. The head is twice as wide as long, with the anterior-lateral corners rounded. The eyes are medium-sized and consist of two ommatidia. The pleotelson is nearly circular, with long biramous uropods protruding beyond it. Antenna 1 is ~1/8 of the body length and composed of 6 segments, while Antenna 2 is ~1/4 of the body length, with a flagellum of 13 segments. In males, Pleopods 1 and 2 are modified for copulation. Pleopods 1 are fused to form a narrow appendage (the sympod), not widening near the tip and ending in a pair of rounded processes, each bearing 9 setae. Pleopods 2 are not fused, but the inner ramus is modified into a needle-like stylus. The female's brood pouch contains up to eight eggs and is covered by an oval operculum. Males averaged 1.34 mm in length, while the average length for ovigerous females was 1.76 mm (Kensley and Schotte 1999).

No impacts have been reported for Iais floridana, although its host organism, Sphaeroma terbrans, is regarded as an important ecosystem engineer in mangroves and is an important wood-borer of human structures (Becker 1971; Rehm and Humm 1973; Davidson et al. 2014). In another closely related isopod pair, Iais californica had poor survival (15-22%) in containers without S. quoianum, but I. californica had little or no effect on the survival of S. quoianum (Rotramel 1975).