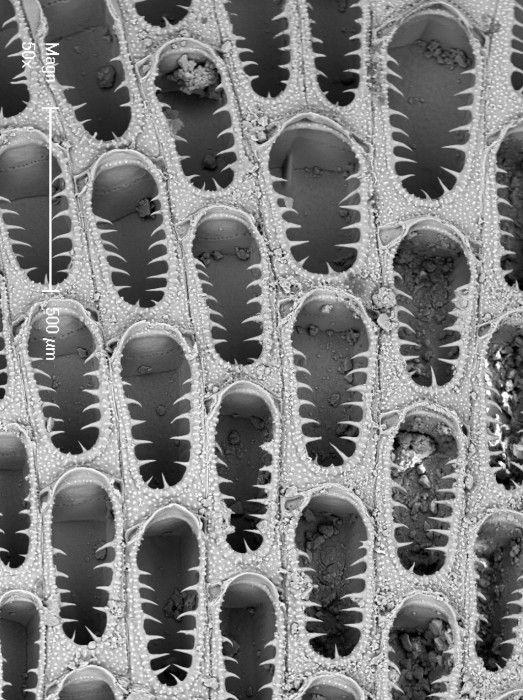 Sinoflustra annae was first described in 1953 from Balboa, Panama on the Pacific side of the Panama Canal. However, its frequent occurrence on docks and other man-made structures is strongly suggestive of ship transport and introduction in this area. An Indo-Pacific native region seems most likely, where its range includes locations on the East and West coasts of India, China and the north coast of Australia. It has been introduced to Florida, the Caribbean coast of Panama, Brazil and western Africa. It occurs in brackish water on pilings, buoys and fouling panels. No ecological or economic impacts have been reported for this species.

Sinoflustra annae forms encrusting colonies. The zooids are rectangular in outline, and about 0.40-0.60 mm in length by 0.20-0.45 mm in width. The frontal area (opesia) is membranous and round to oval. At the distal end of the zooid, the operculum is bordered on each side by a pair of small, subtriangular kenozooids, resembling avicularia, but lacking mandibles, instead being frontally walled by membrane. Laterally and proximally, the membranous opesia is surrounded by a beaded cryptocyst, from the raised inner rim of which small sharp-pointed denticles extend under the membranous surface. There are no ovicells. The zooids may have large vicarious avicularia with rounded mandibles (description from McCann et al. 2007).

Sinoflustra amoyensis
(Robertson, 1921). This species has been synonymized with S. annae by some authors.

Sinoflustra annae was first described from Balboa, Panama, at the Pacific end of the Panama Canal (Osburn 1953). However, the broad environmental tolerance of this species and its frequent occurrence on docks and other man-made structures is strongly suggestive of ship transport and introduction in this region. An Indo-Pacific origin seems most likely (McCann et al. 2007). Its range in this region includes the East and West coasts of India (Arabian Sea and Bay of Bengal) (Menon and Nair 1969; Rao and Batiaji 1988; Udhayakumar and Karande 1989; Karande and Udhayakumar 1992; Swami and Karande 1994), the coast of China from Hainan to Zhejiang Province (Huang 2002; Li 1989, cited by McCann et al. 2007), and the Gulf of Carpentaria, Australia (Bock 2009). Sinoflustra annae has been introduced to Florida, the Caribbean coast of Panama, Brazil and Africa. Its encrusting morphology, planktotrophic larvae, and tolerance of low salinity are traits which have favored its transport and spread by fouling and ballast water, its passage through the Panama Canal, and its colonization of estuarine habitats (McCann et al. 2007).

In 2002, Sinoflustra annae was found to be very abundant on fouling plates in the St. Johns River estuary, Jacksonville, Florida (McCann et al. 2007). In Jacksonville, where salinity ranged from 34 to 3 PSU, this species dominated bryozoan communities, together with the introduced Electra bengalensis. Both of these species are tolerant of low salinities. Sinoflustra annae was not found in five other Florida and Gulf estuaries that have been surveyed by the Smithsonian Environmental Research Center’s Marine Invasions program (McCann et al. 2007).

By 1930, Sinoflustra annae was established at Balboa, near the Panama Canal (Hastings 1930, cited by Osburn 1953, Powell 1971, McCann et al. 2007). In 2004, it was abundant on the Caribbean coast of Panama (Ruiz et al., unpublished data), and was found on fouling plates in Paranagua Bay, Brazil (Cangussu 2008). This bryozoan is also established on the west coast of Africa, in Lagos, Nigeria on the Niger Delta, at Cotonu, Benin on the Gulf of Guinea, and at Moanda, Democratic Republic of Congo on the Congo River Delta (Cook 1968).

Life History- Sinoflustra annae is an encrusting, calcified bryozoan composed of many individual zooids. The zooids feed by extending the ciliated tentacles of the lophophore as a funnel, creating a current, and driving food particles into their mouths. The food is guided along the tentacles and through the pharynx by the cilia. Larger food particles can be moved or captured by flicking or contracting the tentacles (Barnes 1983). The mode of larval development of S. annae is unknown (McCann et al. 2007), but members of the family Flustridae have brooded, lecithotrophic larvae (Gordon et al. 2006). Larvae settle on a substrate, usually an alga, and metamorphose into the first zooid of a colony, an ancestrula (Dudley 1973; Barnes 1983).

Sinoflustra annae is abundant in its native region and its invaded range, but specific ecological or economic impacts have not been reported.

Cangussu, Leonardo Caparroz (2008) [Introduced encrusting species in the Bay of Paranaguá: Capcity for establishment in natural communities], None , Curitaba, Brazil. Pp. None

Hastings, Anna B. (1930) Cheilostomatous Polyzoa from the vicinity of the Panama Canal, collected by Dr, C. Crossland on the cruise of S. Y. St. george, Proceedings of the Zoological Society of London 47: 697–750

Karande, A. A.; Udhayakumar, M. (1992) Consequences of crowding on life-histories of cheilostome bryozoans in Bombay., Indian Journal of Marine Science 21: 133-136