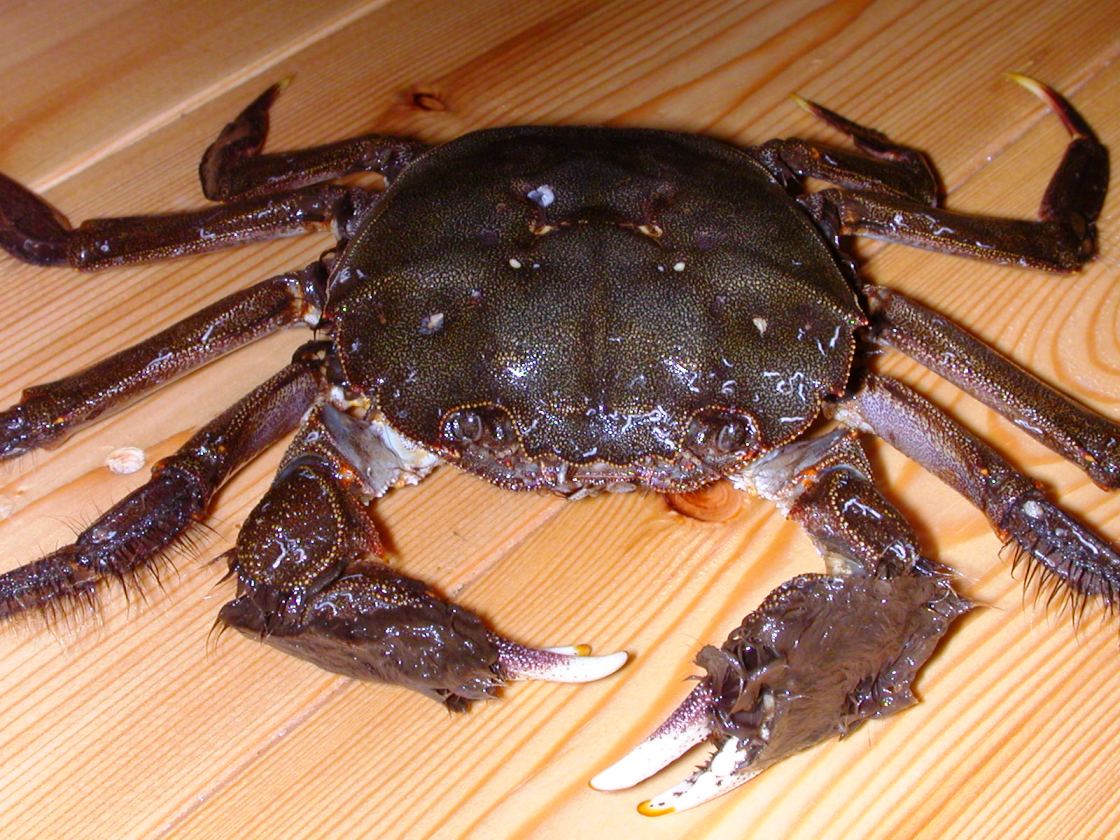 Eriocheir japonica, the Japanese Mitten Crab, is native to estuaries, rivers, and lakes of southern Russia, Japan, southern China, Hong Kong, the west coast of Taiwan, and southeastern Korea. Like the better known E. sinensis (Chinese Mitten Crab), E. japonica is catadromous, growing to adulthood in freshwater rivers and lakes, and migrating downstream to estuaries for spawning. Only one specimen of E. japonica has been reported from beyond its native range. It was found at the mouth of the Columbia River in Oregon and no subsequent individuals were reported.

In July 1997, a mitten crab was caught by an angler at Astoria, Oregon, at the mouth of the Columbia River. It was subsequently identified as E. japonica (Jensen and Armstrong 2004). This is the only record of the Japanese Mitten Crab in US waters. This crab could have been introduced as a larva in ballast water, or as an adult, purchased as seafood. Given the taxonomic difficulties of identifying the various species, and the uncertainties in their status, it is possible that other specimens of E. japonica or other species of Eriocheir have been released in US waters.

A genetic survey of Mitten Crabs in Europe found crabs identified as E. japonica in the Netherlands, Poland, and Germany. Some of these individuals may represent established populations. The Japanese Mitten Crabs have been overlooked due to their morphological similarity (Hayer et al. 2019).

Mitten crabs of the genus Eriocheir are easily recognized as adults and juveniles by the dense patches of setae (bristles or hairs) on their claws. Both males and females have hairy claws, but setae cover more of the claws in the males. The tips of the claws are white, and the claws are roughly equal in size. The carapace is slightly broader than it is long, with four teeth on its front margin. There is a frontal notch between the eyes. Legs are about twice as long as the carapace width, and in adults, the outer segments are lined with long hairs (Guo et al. 1997; Rudnick et al. 2000).

There has been disagreement as to whether to consider the Chinese Mitten Crab, E. sinensis, as a single variable species, or to recognize several regional species. Recent morphological (Guo et al. 1997; Komai et al. 2006) and genetic studies (Tang et al. 2005) have not resolved this disagreement. If the regional forms are subspecific, E. japonica is the senior name and E. sinensis becomes E. japonica sinensis (Tang et al. 2005). This synonymy has not been generally accepted. Differences among the various regional species are quite small.

Specimens of E. japonica (Japanese Mitten Crab) differ from E. sinensis (Chinese Mitten Crab) in having a less convex carapace, with a slight central depression over the stomach. The frontal teeth are blunter and less deeply divided than those of E. sinensis, with a shallower median notch. The four antero-lateral teeth are less well-defined in E. japonica than in E. sinensis. The propodus of the fourth walking leg is wider and more flattened in E. japonica, 2.2-2.7 X as long as wide, compared to 2.5-3.6 X as long as wide in E. sinensis (Jensen and Armstrong 2004).

The zoea stages and megalopa larvae of E. japonica are described by Kornienko et al. (2008).

Sakai (2013) has proposed a revision of the Mitten Crab group, in which E. japonica and E. ogasawaraensis would be retained the genus Eriocheir, while E. hepuensis and E. sinensis would be transferred to the new genus Paraeriocheir. We will retain the the traditional scientific names, until the revisions are generally accepted.

Eriocheir ogasawaraensis
Native to the Ogasawara Islands, SE of Japan

Neoeriocheir leptognathus
Native to coastal waters of China, does not enter freshwater

Life History- Adult mitten crabs (Eriocheir spp.) are catadromous. They spawn in estuaries in brackish-marine waters. Females carry a sponge-like mass of fertilized eggs under their abdomen, until the eggs hatch into spiny larvae (zoeae), which molt through five stages, before molting into a more crablike megalopa stage. The megalopa stage molts into a 1st crab stage, which has a typical crablike form. The megalopa and later stages are attracted to fresh water and tend to move up into low salinity regions. The planktonic larvae require salinities of 15-30 PSU for successful development to the megalopa stage, and show their best survival at 25 PSU. Megalopae show a preference for intermediate salinities of 15-25 PSU, and tend to seek bottom waters, resulting in upstream transport (Anger 1991).

Ecology- Adult crabs migrate downstream for spawning - the males first, followed by the females. Not all crabs may migrate upstream- some may stay in brackish water (Rudnick et al. 2000). Early crab stages may spend their first winter in brackish water and then migrate upstream into non-tidal portions of rivers and streams, where they feed, grow and molt about 10-12 more times. Some crabs have been collected 1000 km from the sea. Adult crabs are tolerant of a wide range of salinities and temperatures, growing actively at temperatures from 7 to 30°C (Anger 1991; Rudnick et al. 2000). When crabs approach maturity, at 2 to 4 years, rapid growth of reproductive organs begins, and crabs develop an urge to migrate downstream for spawning (Herborg et al. 2005). Migration, with a final puberty molt, takes place in the fall, and spawning occurs in late fall. Adults die after spawning (Anger 1991; Hymanson et al. 1999; Herborg et al. 2005; Rudnick et al. 2005).

Only a single specimen of Eriocheir japonica (Japanese Mitten Crab) has been reported from US waters (Jensen and Armstrong 2004). If this species became established in North America, its impacts would probably be similar to those reported for E. sinensis (Chinese Mitten Crab).

Jensen, Gregory C.; Armstrong, David A. (2004) The occurrence of the Japanese mitten crab, Eriocheir japonica, on the west coast of North America., California Fish and Game 90(2): 94-90