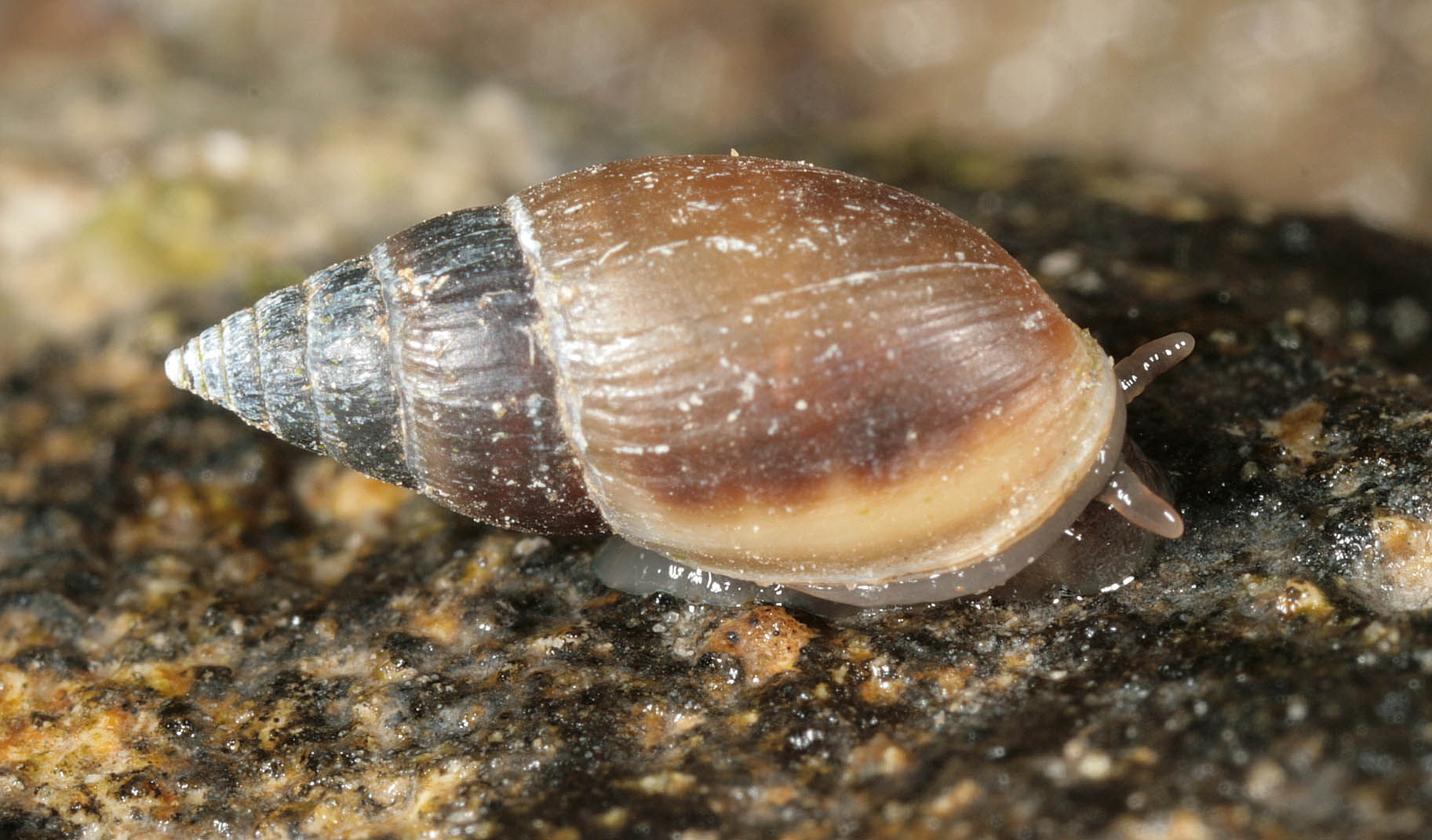 Myosotella myosotis is commonly known as the Mouse-Ear Snail. It is a small, semi-terrestrial snail, occurring on the upper edges of salt marshes and pilings. It is native to the eastern Atlantic from the British Isles and western Baltic to the Mediterranean. It has been introduced to a number of locations around the globe, often being re-described, and therefore has a complex taxonomy with a number of synonyms. It is introduced in the western Atlantic from Nova Scotia to the West Indies, the eastern Pacific from Washington to California, and the coasts of South America, South Africa, Australia, and New Zealand. It is an air-breathing snail, which normally inhabits damp soil, wood, and vegetation above the waterline. No impacts are reported for this species in its introduced range.

Myosotella myostis is native to the eastern Atlantic coastlines from the British Isles and western Baltic to the Mediterranean, where it inhabits the upper intertidal of salt marshes (Meyer 1955; Seelemann 1968; Bruydonycx et al. 2000). It has been introduced to the northwest Atlantic from Nova Scotia to the West Indies, the eastern Pacific from Washington to California, and the coasts of South America, South Africa, Australia, and New Zealand (Morrison 1963; Abbott 1974; Carlton 1979; Carlton 1992; Smith 1992; Martins 1996; Orensanz et al. 2002). Morrison (1963) noted that 'In my opinion this species has been introduced accidentally to every locality in which it is now living in the Western hemisphere. At least on the Atlantic coast of the United States, every such locality known to me is either a port or an oyster wharf. Because of the life history, which is known to include 'crawl away' young instead of a pelagic stage, Phytia (Myosotella) myostis still shows the same spotty distribution, many years after it first reached those places'. Likely vectors include dry ballast, cargo, and transplanted oysters. While this snail does not normally occur on oyster beds, transplanted oysters were often temporarily stored on shorelines or docks, where these snails are likely (Morrison 1963; Carlton 1992).

Myosotella myosotis was first recorded on the West Coast in San Francisco Bay in 1871 (Cooper 1872, cited by Carlton 1979). Given intense shell-collecting in the area, this snail was probably discovered soon after its introduction. It spread rapidly with shipping, and probably with oyster transplants, reaching Humboldt Bay by 1876, Los Angeles by 1915, and Puget Sound by 1936 (Carlton 1979; Carlton 1992). The current range on the West Coast is from Ojo de Liebre Lagoon (formally known as Scammon’s Lagoon), Mexico (Carlton 1979) to Nanaimo, Vancouver Island, British Columbia (Carlton 1979; Gillespie et al. 2007). This snail is found both in major port cities, but also in smaller ports where aquaculture, fishing, and recreational boating predominated. Myosotella myosotis is common under logs and other shore debris at the edge of marshes (Carlton 1979; Cohen and Carlton 1995; McLean 2007).

On the East Coast, Myosotella myosotis was first reported from Narragansett Bay, Newport, Rhode Island as Melampus borealis by T. A. Conrad in 1832 (cited by Martins 1996). Gould (1841) described it (under the name Auricularia denticulata) as occurring in 'decaying wharves, about and below the high water mark', probably in the Boston Harbor and nearby ports. Stimpson (1851) in the 'Shells of New England' adds: 'It is perhaps an imported species'. By 1873, it was known to occur from Nova Scotia to Cape May, New Jersey (Gould 1870; Verrill and Smith 1873). It was collected in Chesapeake Bay in 1900 (Pilsbry 1900) and in Charleston, South Carolina in 1913 (Masyck 1913, cited by Harrison and Knott 2007). The southernmost record on the East Coast is from St. Augustine, Florida in 1997 (Florida Museum of Natural History 2013). The later appearance and scarcity of records in the south could represent the slower spread of the species or perhaps just less intense collecting.

Myosotella myostis has been widely transported around the world by shipping, often being described as a new species, producing a complex taxonomy with over 95 listed synonyms (Martins 1996). It has been introduced to Bermuda and Peru as Alexia bermudensis Adams 1855, South Africa as Alexia pulchella Morelet 1899, and South Australia as Auricula meridonalis Brazier 1877 (Martins 1996). This species was introduced to the southeast coast of South America by 1974 (Figueras and Sicardi 1974, cited by Orensanz et al. 2002). This snail does not appear to have become established in tropical regions.

Myosotella myosotis is a small, semi-terrestrial snail, occurring on the upper edges of salt-marshes and pilings. Its shell is ovate-fusiform and dextrally coiled with a pointed spire. It has 7-8 whorls, with a distinct suture and sometimes a spiral marginal line. The inner lip of adult shells has three white folds, with the lowest one formed by the lower lip. The outer lip has three inner teeth. The umbilicus is minute. The shell is dark-brown to purplish brown. Adult snails are 5-12 mm long. Considerable variability occurs in shape and color, even within populations (Bousfield 1960; Abbott 1974; Martins 1996).

This snail has a very complex taxonomy. Martins (1996) listed 97 synonyms. We have been selective, focusing primarily on names used in North American waters.

Myosotella myosotis is a small, air-breathing semi-terrestrial snail, occurring on the upper edges of salt-marshes and pilings. It is a simultaneous hermaphrodite. Individuals copulate, exchanging sperm and fertilizing their eggs (Barnes 1983; Ruthensteiner and Stocker 2009). The eggs are laid in masses on the substrate and develop directly into small snails. Egg development takes ~18 days at 20°C (Seelemann 1968). The snails hatch out at about 0.35 mm shell length and reach maturity at 5-10 mm in length (Martins 1996). Adults lay an average of ~550 eggs (Seelemann 1968).

Myosotella myosotis normally inhabits damp soil, wood, and vegetation above the waterline. Adults from the Mediterranean and Baltic survived 10-25 days underwater at salinities of 20-40 PSU (Seelemann 1968). Adults from the Baltic survived well for at least 6 weeks on a substrate moistened with freshwater, and at salinities as high as 50 PSU. Mediterranean animals survived substrate salinities as high as 90 PSU. Successful egg development for Baltic animals occurred at 5 to 40 PSU, while Mediterranean animals developed at 10-45 PSU. Optimum development for both populations was at ~10 PSU (Seelemann 1968). This snail feeds on bacteria, cyanobacteria, benthic diatoms, and epithelial cells of marsh plants (Seelemann 1968; Berman and Carlton 1991).

Only one study has been conducted comparing the biology or resource use of Myosotella myostis and native snails. In Coos Bay, Oregon, researchers found no evidence of competition between M. myostis and the native snails Assiminea californica (California Assiminea) and Littorina subrotundata (Salt Marsh Periwinkle). However, the M. myostis population is concentrated in higher levels of the marsh, while the native species are more abundant in the lower marsh (Berman and Carlton 1991).

Balch, Francis Noyes (1899) List of marine mollusca of Coldspring Harbor, Long Island, with descriptions of one new genus and two new species of nudibranchs, Proceedings of the Boston Society of Natural History 29(7): 133-163

Cooper, J. G. (1886) On fossil and sub-fossil land shells of the United States, with notes on living species, Bulletin of the California Academy of Sciences 1: 235-255

2007 Distribution of nonindigenous intertidal species on the Pacific Coast of Canada. http://www.pices.int/publications/presentations/PICES_15/Ann15_S8/S8_Gillespie.pdf

Johnson, Charles W. (1934) List of marine mollusca of the Atlantic coast from Labrador to Texas, Proceedings of the Boston Society of Natural History 40(1): 1-204

Orensanz, Jose Maria and 14 other authors (2002) No longer the pristine confines of the world ocean: a survey of exotic marine species in the southwestern Atlantic, Biological Invasions 4(1-2): 115-143

Perkins, George H. (1869) Molluscan fauna of New Haven. A critical review of all the marine, fresh water and land Mollusca of the region, with descriptions of many of the living animals and of two new species. Part I. Cephalopoda and Gasteropda, Proceedings of the Boston Society of Natural History 13: 109-136

Perkins, George H. (1871) Molluscan fauna of New Haven. A critical review of all the marine, fresh water and land Mollusca of the region, with descriptions of many of the living animals and of two new species. Part II: Acephala and Bryozoa., Proceedings of the Boston Society of Natural History 13: 138-163

Verrill, A. E. (1880b) Occurrence at Newport, R. I., of two littoral species of European shells not before recorded as American, American Journal of Science 20: 250-251

Wolff, W. J. (1973) The estuary as a habitat: An analysis of data on the soft-bottom macrofauna of the estuarine area of the rivers Rhine, Meuse, and Scheldt, Zoologische Verhandelingen 126: 4-242