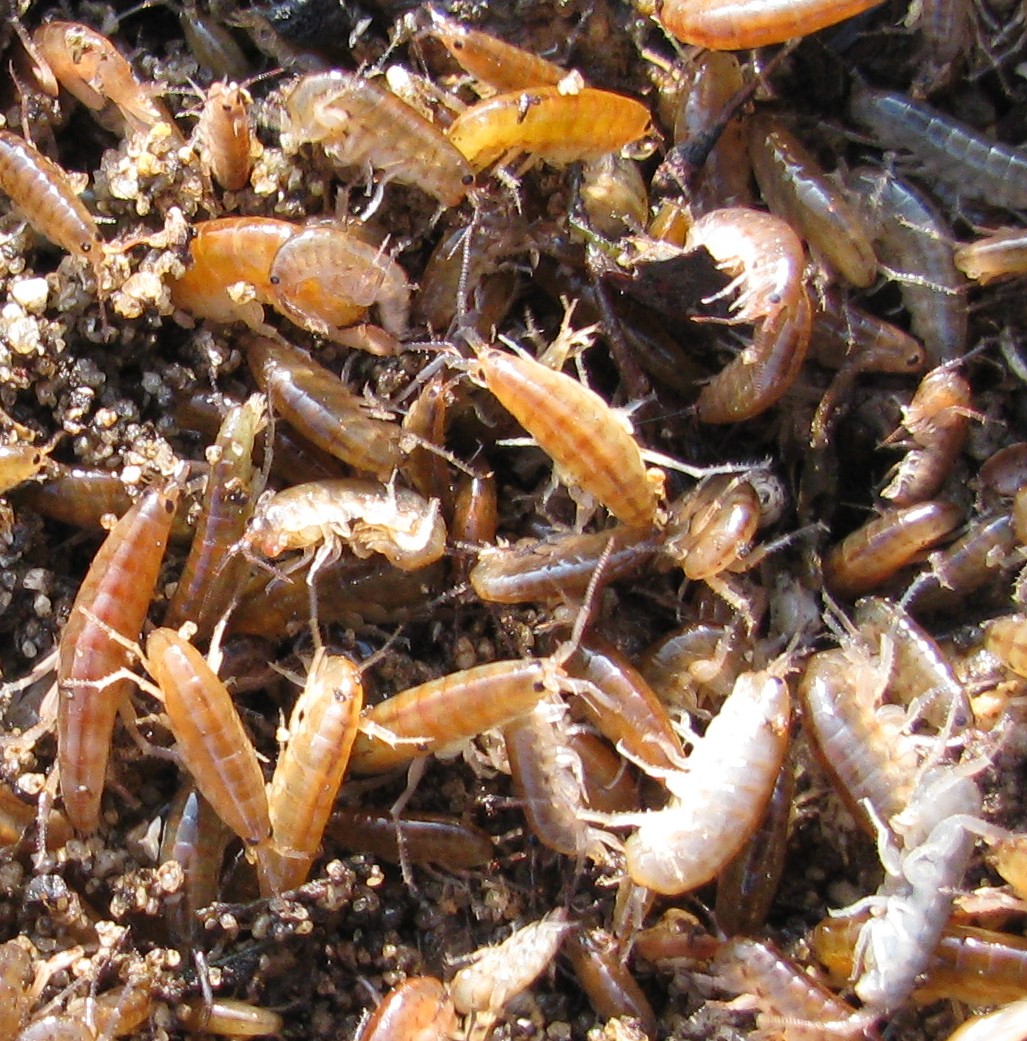 Orchestia gammarellus is a semi-terrestrial amphipod, commonly known as a beach-flea or sand-hopper. It is native to Europe where its range extends from Norway to the Mediterranean as well as the Azores. Madeira, and the Canary Islands. It is introduced in the Western Atlantic, were it extends from Newfoundland to Maine. Other introduced populations are known from Iceland, Chile, Argentina, and South Africa. It inhabits the upper intertidal drift line of rocky shores, including areas of washed-up seaweed and seagrasses, and is sometimes found in estuaries or marshes. No economic or ecological impacts have been reported for this species.

Orchestia gammarellus has a wide native distribution in the Northeast Atlantic, from southern Norway to the Mediterranean and Black Seas, as well as the Azores. Madeira, and the Canary Islands (Dahl 1967; Lincoln 1979; Bellan-Santini et al. 1993; Sezgun et al. 2001). It has a much narrower range in the Northwest Atlantic, from northern Newfoundland to Casco Bay, Maine (Bousfield 1973), and is thought to be introduced here (Chapman 2000). Patterns of genetic diversity and abundance are consistent with a spread from east to west (Norway, Scotland, and Baltic to Iceland and North America) (Henzler and Ingolfsson 2008). Introduced populations are also known from South Africa, Argentina, and Chile (Orensanz et al. 2002; Lopez Gappa et al. 2006; Mead et al. 2011b; Pérez-Schultheiss 2014). Likely vectors for transport are dry ballast and cargo, given the littoral habitat and air-breathing nature of these amphipods.

The timing of the introduction of Orchestia gammarellus to Northeastern North America is not known, but one museum specimen was collected in Passamaquoddy Bay, Maine in 1864 (Yale Peabody Museum of Natural History 2016). Bousfield (1973) gave the range as: 'from eastern and southern Newfoundland to Cape Breton Island; from the western end of Nova Scotia and throughout Bay of Fundy along coast of Maine to Casco Bay.' Steele (1961) reported one record each from the western shore (Port au Port) and the northern shore (Notre Dame Bay) of Newfoundland. Henzler and Ingolfsson (2008) commented on the scarcity and patchy distribution of this amphipod in Atlantic Canada, in contrast to its abundance in Europe.

Orchestia gammarellus was first collected in Iceland in 1968, near Reykjavik. In southwest Iceland, it occurs along the coast from Reykjavík to Strandarkirkjar. In northwest Iceland, during 2000-2002, it was found at 12 sites from Gjorvidalur to Skaro, but with a very limited distribution in intertidal hot springs (Henzler and Ingolfsson 2008). In South Africa, O. gammarellus was collected in 1949 at Langebaan, north of Cape Town, and at the Knysna Estuary, on the southern coast. It was found near Table Bay, Cape Town, in 2008 (Mead et al. 2011b). On the other side of the Atlantic, this amphipod was collected in Rio Negro Province, Argentina before 1978, and later found near Puerto Deseado, Santa Cruz in 1986 (Orensanz et al. 2002). In Chile, it has been found at three widely separated sites, Playa Changa, Coquimbo at 30°S in 2005; Concón, Reg. de Valparaíso at 36°S in 2005; and Puerto Montt at 41.5°S in 2013 (Pérez-Schultheiss 2014). The pattern of invasion at many of these locations seems very patchy, possibly reflecting this amphipod's poor ability to disperse by rafting (Henzler and Ingolfsson 2008), making it dependent on many independent local transport events on ships, small boats, fishing gear, bait wrapped in seaweed, etc.

Orchestia gammarellus is an amphipod of the family Talitridae. General features of this family include a laterally compressed, arched body; a short Antenna 1 and long Antenna 2; well-developed eyes and pereiopods (walking legs); hopping locomotion; and the ability to survive exposure to air in beach wrack-lines and debris. Orchestia gammarellus has a squarish-oval, medium-sized eye. Antenna 1 is short, with its tip reaching the distal end of peduncle segment 2 of Antenna 2. The peduncle of Antenna 1 has 4 segments, and the flagellum has 4-5 segments. Antenna 2 is about 1/3 body-length. The peduncle is more robust in the male than female, and the flagellum is slightly shorter than the peduncle. In both sexes, Gnathopod 1 is much smaller than Gnathopod 2. The dactyl (segment 7) of Gnathopod 1 barely overlaps the palm. The propodus of Gnathopod 2 is greatly inflated, especially in the male. The dactylus is shorter than the palm. Pereiopods 3 and 4 are relatively short. Perieopods 5-7 are progressively longer, and their coxal plates larger. The abdominal side plates 2 and 3 have angular corners. The urosome segments are distinct. Uropods 1 and 2 are biramous, while Uropod 3 is uniramous, with the distal segment blunt and spine-like. The telson is spade-like, formed of two medially fused lobes with stout lateral and apical spines. Adult males reach 16-18 mm, while females reach 14 mm. The color ranges from greenish brown to reddish brown. This description is based on: Bousfield 1973 and Lincoln 1979.

In European waters, Orchestia gammarellus cannot survive prolonged immersion, but is tolerant of rain and sharp changes in salinity. Sexes are separate, the young are brooded, and development is direct. In New England and the Maritime Provinces, populations are annual, females are ovigerous from May through August, and have more than one brood per year (Bousfield 1973). Females in Morocco have a mean brood size of 15 eggs per female, and 4-5 broods per year, but only a 10-month life-span (Aksissou and Elkaim 1996). Females on the Swedish Baltic shores had 5-30 eggs, increasing with body size (Persson et al. 1999).

In the Northeast Atlantic, O. gammarellus ranges from cold-temperate zones (southern Norway, Faroe Islands) to subtropical regions (Morocco, Tunisia, Madeira, Canary Islands) and survives a wide range of temperature, from below freezing to 38°C (Dahl 1967; Aksissou and Elkaim 1994; Persson 1999; Morritt and Ingolfsson 2000; Henzler and Ingolfsson 2008). As an inhabitant of the upper shore, exposed to rainfall and evaporation, O. gammarellus tolerates a wide range of salinity (3.5-51 PSU), but has not colonized freshwater regions or the lowest salinity regions of estuaries (Persson 1999). Orchestia gammarellus appears to have a wider habitat range in its native habitat in the Northeast Atlantic, including rocky shores, salt marshes, sand-dunes, banks of freshwater streams, and springs on cliffs high above the sea (Dahl 1967; Persson 1999; Dias and Sprung 2004; Colombini et al. 2013). While in the Northwest Atlantic, it is found mostly on rocky and gravelly shores, and occasionally in marshes and estuaries (Bousfield 1973).

Orchestia gammarellus is a littoral scavenger, but primarily herbivorous, feeding on washed-up wrack and detritus. It is usually considered to prefer algal wrack, and cannot digest Eelgrass (Zostera marina), but does feed on attached microorganisms. Population characteristics did not differ between populations in algal and seagrass wrack (Persson 1999).

No impacts have been reported for introduced populations of Orchestia gammarellus.

Ingolfsson, A.; Olafsson, O. P.; Morritt, D. (2007) Reproduction and life-cycle of the beachflea (Orchestia gammarellus (Pallas) (Crustacea: Amphipoda) at thermal and non-thermal sites in the intertidal of Iceland: how important is temperature?, Marine Biology 150: 1333-1343

Orensanz, Jose Maria and 14 other authors (2002) No longer the pristine confines of the world ocean: a survey of exotic marine species in the southwestern Atlantic, Biological Invasions 4(1-2): 115-143