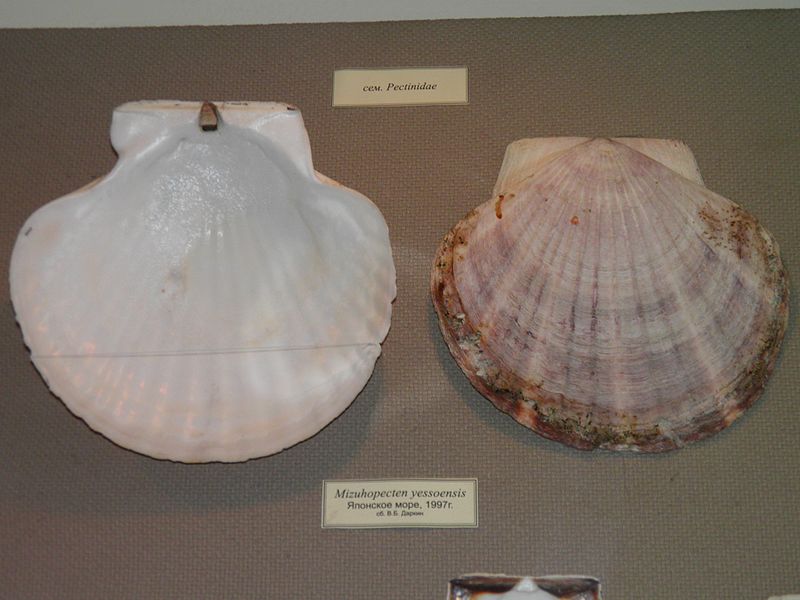 Mizuhopecten yessoensis is commonly known as the Japanese Weathervane Scallop. It has a large, rounded shell, which can become heavily encrusted with algae, barnacles, and other epibiota. It is native to the Northwest Pacific, from Japan, Korea and Russia.  It is a valued aquaculture species and has been cultured in a number of locations around the world, including China, Canada, Denmark, France and Morocco. In some areas, such as British Columbia, it is cultured in open water cages as opposed to a hatchery. However, there are no known wild established populations of this species.

Mizuhopecten yessoensis is native to the Northwest Pacific, from Tokyo Bay, Japan and the northern part of the Korean Peninsula to southern Sakhalin and the Kurile Islands, Russia (Scarlato, in Golikov et al. 1976; Gillespie et al. 2012). They have been introduced for aquaculture to China (Yellow Sea), Western Canada (British Columbia), Denmark, France, and Morocco (Minchin 2003). Culture operations in China and British Columbia have been commercially successful, but are dependent on hatcheries for reproduction (Gillespie et al. 2012), although some wild reproduction occurs in China (Liu et al. 2010). Other introductions have not resulted in commercially viable culture, or established populations (Minchin 2003; Gillespie et al. 2012).

Mizuhopecten yessoensis was imported to British Columbia (BC), and reared in hatcheries, under quarantine conditions, until 1988-1989, when culture began in open waters. Attempts at growing-out hatchery-reared scallops were unsuccessful because of predation. Consequently, scallops were reared in cages, suspended from rafts (Gillespie et al. 2012). Cultured M. yessoensis had high mortality due to the protozoan parasite Perkinsus pugwadi. Hybrids between M. yessoensis and the native Weathervane Scallop (Patinopecten caurinus) proved resistant to infection (Bower et al. 1999), and are now the predominant form cultured in BC waters (Gillespie et al. 2012). Scallop culture operations have occurred in all of BC’s Shellfish Transfer Zones, including Haida Gwaii (Queen Charlotte Islands) (Sloan et al. 2004), the north central Coast, Queen Charlotte Strait, Georgia Strait, and the west coast of Vancouver Island. While commercial, hatchery based culture of the scallops have been successful, no reproduction has been reported (Gillespie et al. 2012).

Culture of Mizuhopecten yessoensis has been attempted at many locations around the world, owing to this scallop's large size and high food quality. Culture in China began in 1982, using hatchery-produced spat. By 2010, natural reproduction was occurring at some sites in Dalian, China, in the Yellow Sea (Liu et al. 2010). Culture of M. yessoensis continues to be commercially successful, although climate variability can sometimes contribute to high mortality (Liu et al. 2014). Culture attempts in Denmark (in 1985), France (in 1986-1988), Ireland (in 1990), and Morocco have been commercially unsuccessful, and have not resulted in documented reproduction (Goulletquer at al. 2002; Minchin 2003; Gillespie et al. 2012).

Mizuhopecten yessoensis, has a large, rounded shell, which is a little wider than it is tall. It has prominent auricles ('wings') flanking the triangular beak. The right valve has a shallow, rounded byssal notch at the base of the auricle. The shell has 21-23 radial ribs, with rounded cross-sections on the right valve, and narrower ribs on the left valve. The left (upper) valve is flattened, while the right (lower) valve is more convex. Fine radial ribs are present on the auricles of the left valve. The shell can reach lengths and heights of 180-200 mm. The upper valve is dark brown or violet-brown, while the lower valve is yellowish-gray. The upper valve can become heavily encrusted with algae, barnacles, hydroids, and other epibiota. Description based on Skarlato, in Golikov et al. 1976, Coan et al. 2000, and Gillespie et al. 2012.

Patinopecten caurinus
Weathervane Scallop, native to Northeast Pacific from the Aleutian Islands to California. The right valve has a deep notch at the base of the auricle, and the auricles are smaller than those of M. yessoensis (Coan et al. 2000).