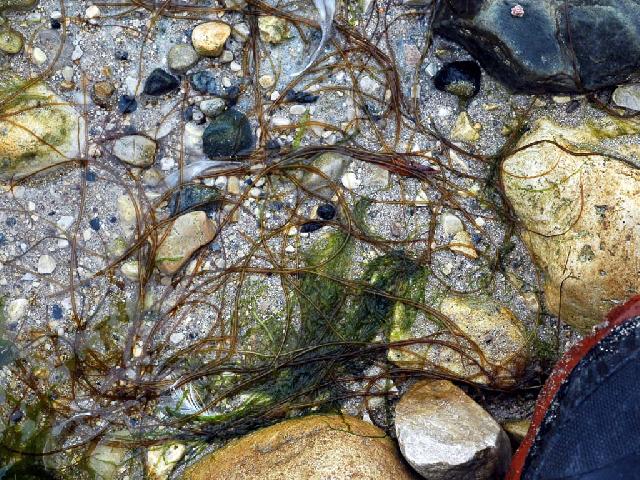 Chorda asiatica is a brown alga, which resembles a thick brown chord. It is native to the rocky shores of Japan, from Kyushu to Hokkaido. An introduced population is known from Puget Sound, Washington, where it was likely introduced with Pacific Oysters (Crassostrea gigas). Molecular identification is almost always necessary due to its simple morphology and the tendency to confuse this species with others from the Chorda genus. It is associated with cold, boreal waters and grows on shells, pebbles, boulders, and rock. No ecological or economic impacts have been reported.

Chorda asiatica is native to the east and west coasts of Japan, ranging from Kyushu to Hokkaido (Sasaki and Kawai 2007). Seaweeds of the genus Chorda have been historically unknown on the West Coast of the U.S., but a specimen was collected in Hood Canal, Puget Sound, Washington in 1993. Its identity was considered unclear, in part, because of a small number of specimens (Sasaki and Kawai 2007). However, a molecular study of the Hood Canal population found that these seaweeds were C. asiatica (Kawai et al. 2015).

Chorda sp. was first collected in Hood Canal, Puget Sound, Washington in 1993. The sample size was small and an initial analysis found it closest to C. kikonaiensis, a species with a very limited range in Hokkaido, Japan. However, Sasaki and Kawai (2007) considered the sample too small for morphological analysis or taxonomic conclusions. A more thorough study of the Hood Canal population identified it as C. asiatica (Kawai et al. 2015). It was growing on oyster shells on a muddy bottom, interspersed with Sargassum muticum, in waters of variable salinity. Chorda asiatica was probably introduced to Puget Sound with Pacific Oysters (Crassostrea gigas) from Japan (Kawai et al. 2015).

Chorda asiatica grows from a small, discoid holdfast 1.5-3.5 mm in diameter. The thallus is an unbranched cord 1-2 m long (occasionally up to 5 m). The cortex is intermediate in thickness ranging between that of C. kikonaiensis and C. rigida. The alga has unilocular sporangia, which are sessile and narrowly ovate. The spores grow into microscopic, diecious, sexually dimorphic, oogamous gametophytes. Given the morphological simplicity of this seaweed, molecular identification is usually necessary. This description is based on: Golikov et al. 1976, Kawai et al. 2000, Sasaki and Kawai 2007, and Kawai et al. 2015.

Chorda kikonaiensis
Sasaki & Kawai 2007; This species has a very limited distribution on the coast of Hokkaido along the Tsugaru Strait.

Chorda rigida
Kawai & Arai 2000; This species is known from Japan, China, Denmark, Sweden, and France. To our knowledge, it has not been designated as an invader in either Asia or Europe.

Chorda asiatica is a marine brown alga, which has a heteromorphic life cycle with microscopic gametophytes, which are dioecious and fuse to produce a sporophyte, and a sporophyte stage, which produces spores asexually (Bold and Wynne 1978; Sasaki and Kawai 2007). The genus Chorda is associated with cold, boreal waters, and is also tolerant of low salinity (Bold and Wynne 1978). Chorda asiatica is known from a temperature range of 5-20°C and 15 to 28+ PSU (Sasaki and Kawai 2007; Kawai et al. 2015). Chorda asiatica grows on shells, pebbles, and boulders, and on silt-clay bottoms (Golikov et al. 1976; Kawai et al. 2015).

No economic or ecological impacts are known for Chorda asiatica in North American waters.