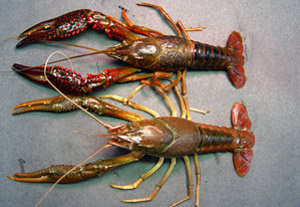 Procambarus zonangulus is commonly known as the Southern White River Crayfish. It is native to the coastal plains along the Gulf of Mexico, from Texas, Louisiana and Alabama. This species is introduced in the Chesapeake Bay watershed and eastern shore of Maryland and Virginia. It can be found in the shallow waters of marsh lagoons, aquaculture ponds, rivers and streams. It is primarily a freshwater species, but can tolerate salinities up to 20-30 PSU. There are no reported impacts for this species.

Image Credit: © FAO - Food and Agriculture Organization of the United Nations. Image shows Procambarus clarkii above and P. zonangulus below.

Procambarus zonangulus is a Gulf coastal plain species, native to eastern Texas and the Mississippi River, Louisiana (Deng et al. 1991) to possibly Alabama (Taylor 1996). It is part of the species complex formerly known as P. acutus acutus, which includes at least three species of crayfishes in the eastern United States (Hobbs and Hobbs 1990; Huner and Barr 1991; Taylor et al. 1996). On the Atlantic seaboard, the 'true' P. acutus acutus (synonyms P. acutus blandingi, P. blandingi) ranges from Florida to New Jersey, and is native in the Chesapeake Bay region (Meredith and Schwartz 1960; Hobbs 1989; Taylor et al. 1996). The systematics and distribution of the P. acutus complex is not completely resolved (Hobbs and Hobbs 1990; Deng et al. 1993).

'Crawdads' imported from Louisiana have been raised on the lower Eastern Shore of Maryland (MD) and Virginia (VA) since 1980 (Associated Press 1986). These stocks consist of a mixture of P. clarkii and 'White River Crayfish' (Harrell 1987), most likely P. zonangulus. Recent surveys (Maryland Biological Stream Survey, Maryland Department of Natural Resources, 1996-2007) of crayfishes in MD have found P. zonangulus in three aquaculture ponds on the Eastern Shore, one in the Nanticoke River drainage and two in aquaculture ponds in the Pocomoke River drainage. However, it is possible that many crayfishes identified as P. acutus in the earlier years of the surveys (1989-1995) were actually P. zonangulus (Kilian et al. 2010). Further surveys, including examination of previously collected specimens from 1995 to 2012, found that P. zonangulus was widespread in the Chesapeake Bay watershed, with more than 700 records, ranging from nontidal Susquehanna and upper Bay tributaries to the middle and lower Potomac and the Eastern Shore. Collections in tidal waters include specimens from lower Potomac tributaries in Charles County, Mattawoman Creek, Nanjemoy Creek Zekiah Swamp Branch, and on the Eastern Shore in Dorchester County, Little Blackwater River (2006-20012, USGS Nonindigenous Aquatic Species Program 2017). The widespread occurrences suggest that bait releases as well as aquaculture and food-releases have contributed to the spread of this crayfish.

While Procambarus clarkii has been widely introduced around the world, P. zonangulus has, so far, only been reported from the Nile River, Egypt (Ibrahim et al. 1997, cited by Holdich et al. 2010). It is likely that it will be found in other locations where crayfish are cultured, or have been released as food.

Procambarus zonangulus has an ovoid carapace and chelae (claws) covered with tubercles and granules. It has a prominent rostrum, which is strongly triangular with a median keel and a pointed tip. The two halves of the carapace are separated by a gap, whereas they join in P. clarkii. The chelae are somewhat narrow, cylindrical, and elongated, with a large gap at the base of the movable finger. The carpus or wrist joint bears three spines, one very large, on its interior edge. In the males, the 3rd segment (ischia) of the 3rd pair of walking legs bears copulatory hooks. The annulus ventralis (seminal receptacle) of the female is an ovoid structure located between the 4th and 5th pair of walking legs, with a sigmoid (a groove running across the center), and two groups of tubercles at the anterior border. Young Southern White River Crayfish are sandy-white, with black spots on the head, body, and tail. The adults are light brown, with a wide black stripe on the dorsal surface of the tail (Huner and Barr 1991). These crayfish mature at ~30 mm carapace length (~60 mm total length) and frequently reach 50 mm (100 mm, total length, Deng et al. 1993). The largest reported specimen was 178 mm total length (Huner and Barr 1991).

Procambarus acutus acutus
P. acutus acutus (White River Crayfish) is a species complex, which includes at least 3 species of crayfishes in the eastern United States. One form is native to Atlantic drainages from Georgia to New Jersey, while the others are native to the Mississippi Basin (Hobbs and Hobbs 1990; Huner and Barr 1991; Taylor et al. 1996).

Life History: Procambarus zonangulus frequently co-occurs with P. clarkii (Red Swamp Crayfish), and is often lumped with it in ecological and aquaculture studies (Niquette and Dabrano 1991; Huner and Barr 1991). They are considered a 'tertiary burrowing' crayfish (primary burrowers burrow year-round, secondary burrowers leave the burrow during rainy periods, and tertiary burrowers inhabit the burrow during the breeding season and during droughts, but are found in open water the rest of the year). Freshwater crayfishes, of the family Cambaridae, mate by internal fertilization, with the male inserting pleopods into the females seminal (annulus ventralis) between the 4th and 5th walking legs. The female curls her abdomen far forward to create a chamber in which the eggs are driven by the pleopods. The mass of eggs becomes attached under the tail. Larval development takes place inside the egg and the young hatch as miniature adults (Barnes 1983).

Male cambarid crayfish show sharp morphological changes with season. At the start of the breeding season, they molt into a sexually competent stage (Form I), marked by lengthening and stiffening of the modified 1st pleopods, more pronounced ischial spines (in the basal segments of the 3rd walking leg) and enlarged chelipeds. After breeding, the crayfish molts back into Form II, with the 1st pleopods less differentiated and soft ischial spines reduced, and less robust chelipeds (Hobbs 1989).

Ecology: Procambarus zoangulus constructs burrows near the water's edge which are usually under 0.5 m in length, but may extend to 4.5 m depending on soil and moisture conditions. Burrows are often partly filled with water, but crayfish are frequently out of the water because of low oxygen concentrations (Correia and Ferreira 1995; Huner and Barr 1984). Overland movements may occur in response to heavy rains, flooding, or anoxia in burrow water (Huner 1989). In the early part of its life, it is found in deeper water (up to two or three feet) in marsh lagoons. As it attains maturity, and the spawning season approaches, it migrates to the shallow water of open marshes (usually less than six inches deep). Culture ponds are usually 0.3-0.7 m deep (Huner and Barr 1991). Procambarus zonangulus, like P. clarkii, tolerates salinities of 20-30 PSU (Huner and Barr 1991; Newsom and Davis 1994). Both Procambarus spp. are omnivorous, but in Texas sloughs, female P. zonangulus consumed more animal food than P. clarkii (Deng et al. 1993). The presence of Blue Crabs (Callinectes sapidus) likely restricts the occurrence of Southern White River Crayfish in East coast estuaries (Huner and Barr 1991).

No ecological impacts have been reported for Procambarus zonangulus. However, its introduced population has only been surveyed in Maryland (Kilian et al. 2010; USGS Nonindigenous Aquatic Species Program 2017). Potential impacts are probably similar to those of P. clarkii, including burrowing, destruction of aquatic vegetation, and competition with native crayfishes.