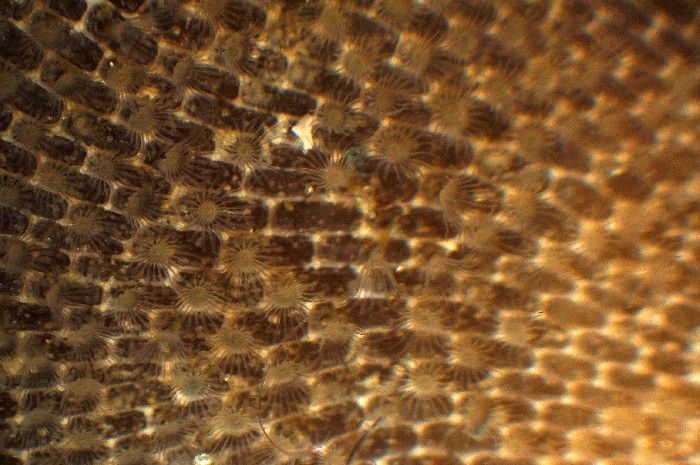 Membranipora membranacea is an encrusting bryozoan that forms extensive white lacy coverings on algae, often on laminarian kelps. It is native to European waters, and was previously reported as having a broad global anti-tropical distribution in the Northern and Southern Hemispheres. However, recent genetic studies indicate that this species is a complex of a number of long-separated clades. The only verified invasion is its introduction from the Northeast Atlantic to the Northwest Atlantic, where it now occurs from Long Island Sound to southern Labrador. It is known primarily from algal beds, but also occurs on ships' hulls, buoys, and fouling panels. It has negative impacts on seaweeds by fouling their surfaces, reducing their rate of photosynthesis and growth, and making them more prone to tearing and breakage during storms.

The encrusting bryozoan Membranipora membranacea was described from the Baltic Sea in Sweden by Linnaeus in 1767. In its native European waters, it occurs from the Barents Sea to the Atlantic coast of Spain, usually growing on macroalgae (Kluge 1975; Schwaninger 1999). It had been previously considered to have a global anti-tropical distribution, in the Northern and Southern Hemispheres, but North Pacific populations have been regarded as separate species by some taxonomists (Dick et al. 2005), while some or all Southern Hemisphere occurrences have been attributed to introductions by shipping (Keough and Ross 1999; Gappa 2000; Griffiths et al. 2009). However, mitochondrial DNA studies indicate that this 'species' consists of three long-separated clades in the North Pacific, and monophyletic clades in the North Atlantic, Southeast Pacific (Chile), Southwest Pacific (Australia, New Zealand), and Southeast Atlantic (South Africa) (Schwaninger 1999; Schwaninger 2008). The South African population has been described as a new species, M. rustica (Florence et al. 2007, cited by Mead et al. 2011b). This species complex may have originated in the North Pacific and colonized the Southern Ocean (Chile, South Africa, Australia, New Zealand) 10-20 million years ago, before reaching the Northeast Atlantic (Schwaninger 2008). The only verified invasion is its introduction from the Northeast Atlantic to the Northwest Atlantic. It was first reported from the Isles of Shoals, New Hampshire in 1987, and now occurs from Long Island Sound to southern Labrador (Berman et al. 1992; Wantanabe et al. 2010; Fisheries and Oceans Canada 2011; USGS Nonindigenous Species Program 2011).

Membranipora membranacea was first reported from kelp beds around the Isles of Shoals (New-Hampshire-Maine), and from Cape Neddick, Maine, in 1987 (Berman et al. 1992; Lambert et al. 1992). It was first reported south of Cape Cod at Mohegan Bluffs, Block Island, Rhode Island (1990, USGS Nonindigenous Aquatic Species Program 2011). Its southern limit appears to be Long Island Sound (1993, USGS Nonindigenous Aquatic Species Program 2011). Its northward spread has been more extensive. It has colonized Great Bay, Casco Bay, and Penobscot Bay in the Gulf of Maine (Whitlatch and Osman 2000; Pratt and Grason 2007; USGS Nonindigenous Aquatic Species Program 2011), and in 1992 was found on the Atlantic Coast of Nova Scotia, in Mahone and St. Margarets Bay (Saunders and Metaxas 2007). By 2002, it reached the western coast of Newfoundland, on the Gulf of St. Lawrence, and by 2009 was reported from several bays on the south and north coasts of the island. Its current northernmost record is Red Bay, Labrador, on the Straits of Belle Isle (Fisheries and Oceans 2011).

Colonies of the encrusting Membranipora membranacea form an extensive white lacy covering on algae, often on kelp of the genus Laminaria. Colonies on other alga, such as Fucus spp., are smaller. Young colonies are circular, but growth tends to be fastest towards the base of the frond, which is where new growth of the kelp is occurring. This pattern of growth keeps the colony spreading away from the most encrusted areas, and from the areas of the algal frond most likely to be torn off by waves (Hayward and Ryland 1998; Winston and Hayward 2012).

The autozooids of M. membranacea are rectangular, about 0.4 X 0.15 mm in size, with tubercles or short spines at the corners. Tips of these spines are uncalcified. The whole frontal surface is covered by membranes. Each lateral wall has two vertical, uncalcified bands, which permit the colony to adhere to an algal frond, and bend as the alga flexes with the waves. Some zooids may be 'tower zooids', with huge outward projections. The polypide has about 17 tentacles. The cyphonautes larva is planktotrophic, about 0.6 by 0.8 mm in size (description from Hayward and Ryland 1998; Winston and Hayward 2012), illustrated in Newell and Newell (1977).

Membranipora rustica
The South African form of 'M. membranacea' has been described as a new species, M. rustica (Florence 2007; et al. 2011b).

Membranipora serrilamella
Dick et al. (2005) consider M. villosa and M. serrilamella to be two distinct species in the North Pacific. However, Schwaninger (1999; 2008), on the basis of DNA and other studies, considered these species to be inducible morphs of the North Pacific clade of M. membranacea.

Membranipora villosa
Dick et al. (2005) consider M. villosa and M. serilamella to distinct species in the North Pacific. However, Schwaninger (1999; 2008), on the basis of DNA and other studies, considered these species to be inducible morphs of the North Pacific clade of M. membranacea.

Life History- Membranipora membranacea is an encrusting, calcified bryozoan, composed of many individual zooids. The zooids feed by extending the ciliated tentacles of the lophophore as a funnel, creating a current, and driving food particles into their mouths. The food is guided along the tentacles and through the pharynx by the cilia. Larger food particles can be moved or captured by flicking or contracting the tentacles (Barnes 1983). Larvae of M. membranacea are planktotrophic, and have a planktonic period of about 24 weeks (Yoshioka et al. 1982). Larvae settle on a substrate, usually an alga, and metamorphose into the first zooid of a colony, an ancestrula (Dudley 1973; Barnes 1983).

Fisheries- Membranipora membranacea affects human economies mostly through its effects on cultured large kelps (Saccharina and Laminaria spp.). This bryozoan fouls the surface of kelp fronds, reducing growth, and making the kelp prone to breakage. In waters of Maine and Atlantic Canada, kelp is cultured primarily for industrial chemicals. Bryozoan fouling in Chaleur Bay, Quebec, was reduced by setting out cultures in the fall and harvesting them before heavy larval settlement in July (Gendron et al. 2010). Membranipora membranacea can potentially affect may other fisheries, since kelp beds are prime habitat for lobsters, crabs, sea urchins, and many species of commercial fish. Heavy settlement by this bryozoan reduces kelp survival and biomass, and favors dominance by algae which provide less cover (including the introduced Codium fragile) (Lambert et al. 1992; Harris and Tyrell 2001; Watanabe et al. 2010). However, the effects of its invasion on fisheries yields cannot be easily estimated.

Membranipora membranacea has negative impacts on seaweeds by fouling their surfaces, reducing their rate of photosynthesis, growth, and spore production, and making them more prone to tearing and breakage by water surges during storms. In some cases, M. membranacea invasions have led to great reductions in kelp biomass (Berman et al. 1992; Lambert et al. 1992; Saier and Chapman 2004; Saunders and Metaxas 2008).

Habitat Change- Membranipora membranacea invasions in the Gulf of Maine, and the Atlantic coast of Nova Scotia have resulted in great reductions of biomass of large kelps (Saccharina and Laminaria spp.), favoring their replacement by smaller algae which are less vulnerable to fouling damage (e.g. Agarum clathratum, Desmarestia aculeata, and the introduced Codium fragile), and reducing habitat cover (Harris and Tyrell 2001; Saunders and Metaxas 2008; Watanabe et al. 2010). Membranipora membranacea has also affected invaded habitats by increasing the breakdown of kelp into detritus, greatly increasing detritus production (Krumhansl and Scheibling 2011).

Food/Prey- Membranipora membranacea has provided a greatly increased food supply for at least one bryozoan predator, the nudibranch Onchidoris muricata, possibly allowing it to reproduce earlier in the season (Pratt and Grason 2007). On a broader scale, this bryozoan may increase both the quantity and quality of detritus, by speeding the breakup of kelp (Krumhansl and Scheibling 2011), and by adding CaCo3 and protein to the kelp eaten by sea urchins (Strongylocentrotus droebachiensis), resulting in richer fecal material, and more potential food for microbes (Sauchyn and Scheibling 2009).

2003-2008 Introduced and cryptogenic species of the North Atlantic. http://massbay.mit.edu/exoticspecies/exoticmaps/introduced.html

Ryland, J.S., Hayward, P.J. (1977) British anascan bryozoans, Cheilostomata: Anasca. Keys and notes for the identification of the species., Synopses of the British Fauna 10: 1-187

Saunders, Megan I.; Metaxas, Anna (2009) Effects of temperature, size, and food on the growth of Membranipora membranacea in laboratory and field studies, Marine Biology 156: 2267-2276

Seed, R.; Harris, S. (1980) The epifauna of the fronds of Laminaria digitata Lamour in Strangford Lough, Northern Ireland, Proceedings of the Royal Irish Academy 80B: 91-106

Yoshioka, Paul M. (1982) Role of planktonic and benthic factors in the population dynamics of the bryozoan Membranipora membranacea, Ecology 63(2): 457-468