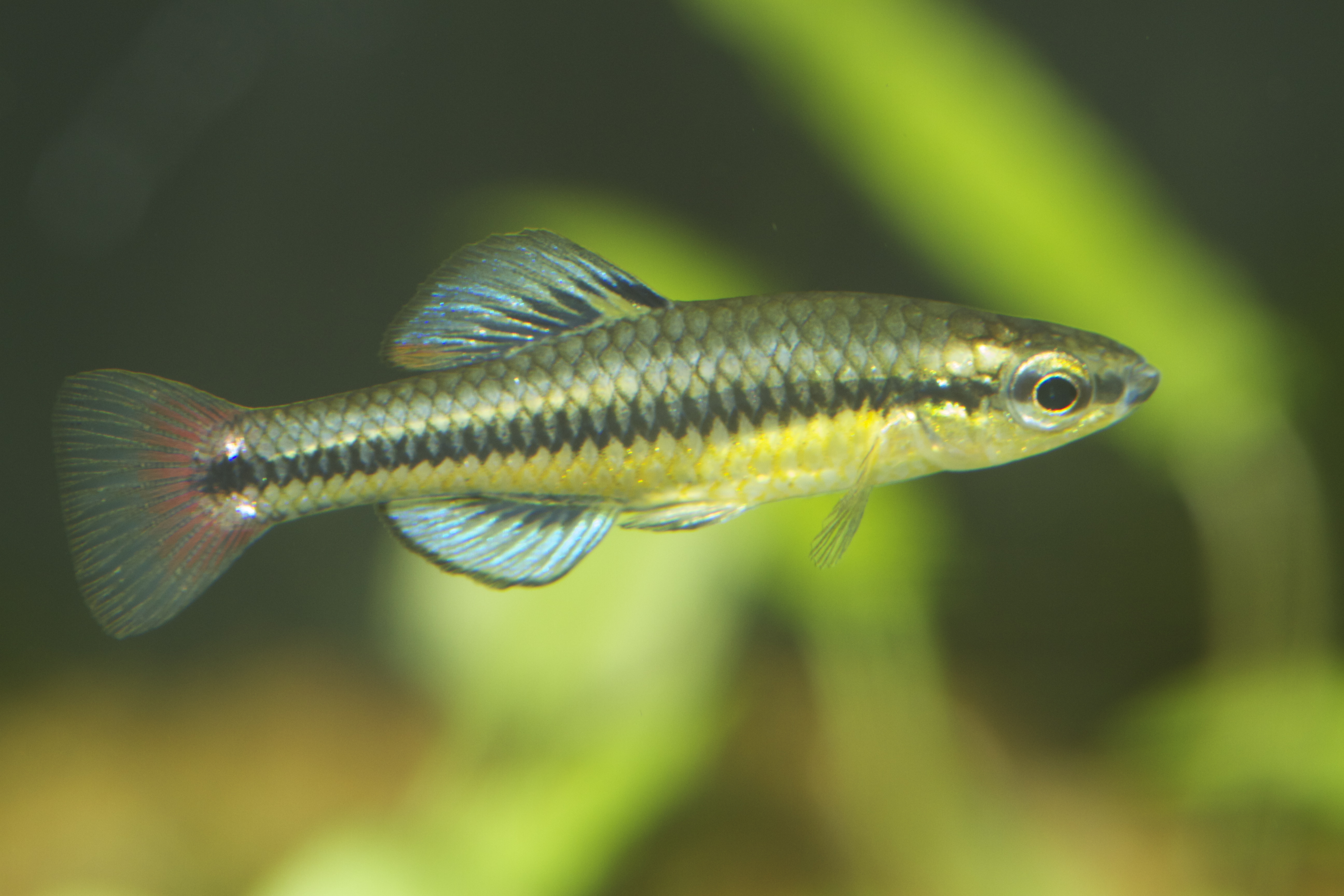 The Bluefin Killifish (Lucania goodei) is a small, primarily freshwater fish that can survive in brackish and marine waters. It is native to the Florida peninsula from the Georgia border to the tip of Florida, and west on the Panhandle to the Choctawhatchee River. Introduced populations have been reported from fresh and brackish waters in North Carolina, South Carolina, Texas, and California. No ecological impacts have been reported so far in the introduced populations.

The Bluefin Killifish (Lucania goodei) was described from the St. Johns River, Florida. It is native to the Florida peninsula from the Georgia border to the tip of Florida, and west on the Panhandle to the Choctawhatchee River (Page and Burr 1991). There is an early (1880) record from the Santee River system, near Columbia, South Carolina, far upstream from Charleston (USNM 149260, US National Museum of Natural History 2009), but populations in coastal South and North Carolina are considered introduced. It is considered a predominantly freshwater fish, although it has been caught at salinities up to 10 PSU in Florida, and some individuals can survive and develop at 30 PSU (Fuller 2008; Fuller and Noa 2008). Bluefin Killifish are attractive freshwater aquarium fish, widely sold and kept. Introduced populations have been reported from fresh and brackish waters in North Carolina, South Carolina, Texas, and California (Loyacano 1975; Christie and Curtis 1975; Lindquist et al. 1977; Huang et al. 2003; USGS Nonindigenous Aquatic Species Program 2018). These scattered introductions of the Bluefin Killifish are likely due to releases of aquarium fish, or of eggs transported in aquatic plants shipped from Florida.

Specimens of Lucania goodei were caught in 1980 in a lily pond at north entrance to Los Angeles County Museum. This population only survived for a few months (Swift et al. 1993; USGS Nonindigenous Aquatic Species Program 2018). In 2000, seven individuals of L.goodei were caught in the San Dieguito River lagoon, in San Diego County, California, at ~16 PSU (Huang et al. 2003). The fish persisted through 2001 when the salinity increased to 34-35 PSU and where captured in 2004 (Steele et al. 2007), indicating an established population, however, no specimens have been captured since then (David Huang, personal communication, 8/8/2018). In October 2017, 15 specimens of L. goodei were caught in Snodgrass Slough, on the Upper Mokelumne Ricer, on the inland edge of the Sacramento-San Joaquin Delta. The specimens were genetically identified (USGS Nonindigenous Aquatic Species Program 2018).

Populations of Bluefin Killifish (L. goodei) established in the Cooper River, South Carolina, upstream of Charleston starting in 1973 (Loyacano 1975; Christie and Curtis 1975), and in Cape Fear River tributaries near Wilmington, North Carolina in 1977 (Lindquist et al. 1977; Menhnnick 1991). On the Gulf Coast, these fish were collected in an artificial wetland at a business near Victoria, Texas in 1998. This population has apparently spread, because fish collected in canals near Green Lake, near the mouth of the Guadelupe River, flowing into San Antonio Bay in 2009. In 2011, fish were found in Buffalo Bayou, in the suburbs of Houston (USGS Nonindigenous Aquatic Species Program 2018)

The Bluefin Killifish (Lucania goodei) is a small, primarily freshwater fish, which also has some ability to survive in brackish and marine waters (Fuller 2009; Huang et al. 2011; Froese and Pauly 2018). The sexes are dimorphic, with males tending to be slightly larger, with bright-colored fins. The fish mature by their second year, and only live for about 2 years. Bluefin Killifish spawn year-round in the southern part of the range, but in the Carolinas they breed in summer (Rohde et al. 1994). Females carry about 200 eggs (Froese and Pauly 2018). Males establish territories in densely vegetated areas, and display by flicking their fins to display and hide the colors. Eggs are probably deposited singly. (Rohde et al. 1994).

The range of Bluefin Killifish (Lucania goodei) is limited at the northern boundary by low winter temperatures, but seem to prefer shaded, vegetated, cooler sites in the southern part of the range. Optimal aquarium temperatures are 12-22 C (Froese and Pauly 2018). Reports of Bluefin Killifish in brackish water have been rare (10 PSU at Cedar Key Florida, Kilby 1955, cited by Fuller 2008). However, a population was discovered in the San Dieguito River Lagoon, California, surviving at 15-35 PSU (Huang et al. 2003; Steele et al. 2007). Bluefin Killifish eggs hatched with ~80% success at 0 and 10 PSU, but with ~25% and 10% success at 20-30 PSU. Most of the larvae hatched at 10-20% survived at least to the onset of feeding (Fuller 2008). Usually, Bluefin Killifish prefer thickly vegetated habitats, where they usually swim well below the surface. Their food consists of invertebrates, algae, bits of aquatic plants, such as Vallisneria sp. (Froese and Pauly 2018; Rohde et al. 1994). The Bluefin Killifish and the more estuarine Rainwater Killifish (L. parva) overlap in fresh and some brackish-water sites, but the differences in their salinity tolerance probably minimizes competition (Dunson and Travis 1991; Fuller and Noa 2008).

No ecological impacts have been reported for introduced populations of Bluefin Killifish (Lucania goodei).

Lorenz, Jerome J. (1999) The response of fishes to physicochemical changes in the mangroves of northeast Florida Bay, Estuaries 22(2B): 500-517

Loyacano, Harold A. (1975) Occurrence Of Bluefin Killifish, Lucania goodei, In South Carolina, Bulletin of the Georgia Academy of Science 33: 117-119