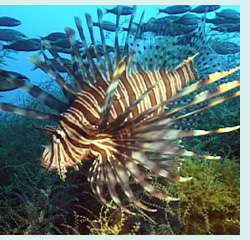 Red Lionfish (Pterois volitans) is a mid-sized (to 380 mm) marine fish with long venomous spines and a color pattern of red-brown and white stripes. This fish is native to the Indo-Pacific, from Malaysia and Japan to Hawaii and the Marquesas (Froese and Pauly 2017). It was introduced to Florida as an aquarium escape or release, first seen in 1985, and has spread to North Carolina, Bermuda, and throughout the Caribbean (Whitfield et al. 2007; Morris et al. 2008). Further south, one specimen was captured off Bahia, Brazil (Ferreira et al. 2015). In Panama, the Red Lionfish was first seen in Bocas del Toro in 2009. It now occurs along the entire Caribbean coast of Panama (Schofield et al. 2009; Robertson et al. 2015b; USGS Nonindigenous Aquatic Species Program 2017). Red Lionfish inhabit coral reefs, rocky areas, pilings, seagrass beds, and ranges from shallow to deep waters. They do not tolerate fresh water, but have been reported from brackish waters of estuaries (Schofield et al. 2015). These are predatory fish and have had large effects on Caribbean coral reefs, affecting fish abundance, commercial catches, and tourist value.

Pterois volitans (Red Lionfish) has an almond-shaped body, and a large head, one-third to one-half body length, with numerous head spines, and often with large tentacles above the eyes. Dorsal fin spines and rays of dorsal, anal, pelvic and pectoral fins are greatly elongated, making the fish look a little like an exploding firework. The caudal fin is rounded. Eleven species of Lionfish (Pterois are known, some very similar morphologically to P. volitans. Pterois miles, very similar to P. volitans, has also been introduced to the the Western Atlantic, and can be distinguished only by meristic counts, morphometrics, and fine morphological details, or molecular methods (Schultz 1986; Hamner et al. 2007; Freshwater er al. 2009; Florida Museum of Natural History 2017; Froese and Pauly 2017; USGS Nonindigenous Aquatic Species Program 2017). The dorsal fin of Pterois volitans has 13 spines and 9-12 (usually 11) soft rays. The anal fin has 3 spines, and 6-8 (usually 7) soft rays. (For P. miles, the usual numbers are 10 dorsal rays and 6 anal rays). Color patterns vary greatly with environment, but are basically zebra-striped in red and white. The soft dorsal, anal, and caudal fins are spotted. (Pectoral fins and fin spots are smaller in P. miles). The usual maximum size of P. volitans is ~380mm, but one specimen off Venezuela reached 457 mm (Schultz 1986; Ehemann 2017; Florida Museum of Natural History 2017; Froese and Pauly 2017; USGS Nonindigenous Aquatic Species Program 2017). Of 180 specimens of Western Atlantic Pterois examined at the molecular level by Hamner et al. 2004), 168 were identified as P. volitans, primarily a western Pacific species, 12 specimens as P. miles, whose range encompasses thee wstern tropical/subtropical Indian Ocean (Africa-Red Sea-Australia) (Hamner et al. 2007). For both species, intraspecific variation in color and morphology is greater than that between species (Schultz 1986; Lowe 2016). A dramatic case is the appearance and rapid spread of a an apparently distinct morphoology of the supraoptical tentacle in both species, both in Indo-Pacific and Atlantic populations. The supraoptical tentacle can either be a simple, unbranched tentacle, or have a highly branched 'peacock-feather' morphology. This polymorphism probably evolved before the divergence of the two species (Morris and Freshwater 2008). Recent genetic studies indicate that hybridization has been occurring between P. volitans and P. miles in the Atlanitc, and P. volitans, in its native Indo-Pacific, has undergone genetic exchange with the more localized species P. lunulata (Luna Lionfish) and P. russelli (Plaintail Turkeyfish) (Wilcox et al. 2018). These authors suggest that heterosis ('hybrid vigor') may have contributed to the invasiveness of inttoduced lionfishes.

Pterois miles
Pterois miles (Devil-Firefish) can be distinguished from P. volitans only by meristic counts and molecular analyses (Schultz 1986; . It is native to the western Indo-Pacific, and has also been introduced to the Western Atlantic (Schultz 1986; Hamner et al. 1997). Where the species have been distinguished, P. miles has been much rarer than P. volitans (Hamner et al. 2004; Guzmán-Méndez et al. 2017).

Red Lionfish (Pterois volitans) have separate sexes, and spawn in pairs, after a courtship ceremony. Male lionfish mature at about 100 mm, and females at about 180 mm. Lionfish are synchronous, ineterminant spawners. The ovaries contain eggs in all stages of development, and spawning can take place year-round. Mature eggs have a mean diameter of 804 um, Eggs are released in a mass, with an estimated 24,630 eggs, surrounded by a ball of mucus. Egg masses are released, two at a time, near the surface (Morris et al. 2009; Morris and Whitfield 2009; Morris et al. 2011; Gardner et al. 2015). In North Carolina, Lionfish spawn about every four days, resulting in an annual fecundity of about two million eggs per year (Morris and Whitfield 2009). The larvae remain in the plankton for 20-35 days, as estimated from daily otolith rings (Ahrenholtz and Morris 2010). The planktonic larvae hatch with a yolk-sac, which is resorbed, and then feed on plankton. The offshore spawning locations, larval period, and pelagic mode of development permit long-distance dispersal by currents (Morris and Whitfield 2009; Morris et al. 2009; Vasquez-Yeomans et al. 2011; Kitchens et al. 2017). Settlement probably takes place predominantly but not exclusively in shallow habitats, including mangroves, seagrasses, estuaries, and around man-made structures, where juvenile lionfish are more common. Larger fish tend to predominate in deep-reef habitats (Biggs and Olden 2011; Claydon et al. 2012; Jud et al. 2011; Cure et al. 2014). The Red Lionfish is generally regarded as a strictly marine, and tropical fish, but it is highly mobile and versatile, capable of using a wide range of habitats. In experiments where temperature was decreased gradually, the mean lethal temperature was 10 C, while feeding ceased at 16 C. In the field, populations off NC, were limited by a 12 C isotherm (Kimball et al. 2004), permitting the fish to winter in Gulf Stream-influenced waters (Kimball et al. 2004). The mean temperature for Lionfish in Onslow Bay, North Carolina was 15.3 C, at a depth of 38-46 M (Whitifield et al. 2014). Upper lethal temperature, determined as a critical thermal maximum (CTM), was 34-39 C (Aiken et al. 2014). Juvenile and adult lionfish were found through much of the Loxahatchee estuary, Florida (Jud et al. 2011). Lionfish survived 28 days at 7 PSU with no mortality or changes in behavior, feeding and growth. Fish in the Loxahatchee estuary occasionally occurred at salinities as low as 1 PSU, but did not survive prolonged exposure to these conditions (Jud et al. 2011; Schofield et al. 2015). Lionfish utilize a range of habitats, including coral reefs, mangroves, seagrass beds, and man-made structures, such as pilings (Barbour et al. 2010; Biggs and Olden 2011; Claydon et al. 2012; Jud et al. 2011; Pimiento et al. 2013). Lionfish have been widely reported in shallow water, but also from the mesophotc zones at the base of reefs, and from deeper slope waters at 200-300 m depth (Gress et al. 2017). The visual system of lionfishes are similar to those of Western Atlantic estuarine piscivores, but they are more sensitive to hypoxia, which could limit their penetration into estuaries (Hasenei et al. 2020). Juvenile and adult Lionfishes are carnivorous. In the Loxahatchee River estuary, where juvenile fish predominated, the prey were about half-and-half fishes and crustaceans (crabs and shrimps). By weight, penaeid shrimps, blennies, and Gerreidiae (mojarras, a small perch-like fish) predominated (Jud and Layman 2011). On reefs in the Bahamas, Côté and Maljkovic (2010) observed Lionfish consuming many species of reef fishes. Lionfishes hunt throughout the diel cycle, but feeding rates are highest near dawn and sunset, and on overcast days (Côté and Maljkovic 2010; Green et al. 2011). In experiments, feeding rates were higher under white or blue light than red light, and lowest in darkness. Attack rates were much higher in environments of low habitat complexity (South et al. 2017). Lionfishes' long-venomous spines limit predation, but they are eaten by native Nassau Groupers (Epinephelus striatus) (Maljkovic and Van Leeuwen 2008; Mumby et al. 2011). Lionfish can be eaten by humans, when the spines are removed, and are highly regarded as food in Asia. Fisheries are being encouraged in the Caribbean, as a possible means of population control (Morris et al. 2012). Introduced populations of lionfish have a much lower incidence of parasites than populations in the naitve range (Tuttle et al. 2017). Lionfish are not social or schooling, but do aggregate in structurally complex habitats. This might aid the development of artificial structures for the attraction and acpture of Lionfish (Hunt et al. 2019).

2021 Ascidians of the Eastern Cape.

Cote, Isabelle M. and 6 authors (2014) What doesn’t kill you makes you wary? Effect of repeated culling on the behaviour of an invasive predator, PLOS ONE 9: e94248

Damkaer, David M. (1971) Parastephos occatum, a new species of hyperbenthic copepod from the inland marine waters of Washington State, Proceedings of the Biological Society of Washington 83: 503-514

DeLapp, John (8/14/2011) Invasive species on the prowl along Texas coast, Galveston County Daily News None: None

Department of the Environment, States of Jersey (2017) Non-native Marine Species in the Channel Islands: A Review and Assessment, None , . Pp. 1-38

Edwards, Morgan A.; Frazer, Thomas K.; Jacoby, Charles A. (2014) Age and growth of invasive lionfish (Pterois spp.) in the Caribbean Sea, with implications for management, Bulletin of Marine Science 90: 53-966

Ferriter, Amy, and 9 authors (2006) Chapter 9: The status of nonindigenous species in the South Florida Environment., None , Miami. Pp. None

Freshwater, D. Wilson and 9 authors (2011) Mitochondrial control region sequence analyses indicate dispersal from the US East Coast as the source of the invasive Indo-Pacific lionfish Pterois volitans in the Bahamas, Marine Biology 156: 1213-1221

Hackerott, Serena and 8 authors (2013) Native predators do not influence invasion success of Pacific lionfish on Caribbean reefs, PLOS ONE 8: e68259

Hare, Jonathan A.; Whitfield, Paula E. (2003) An integrated assessment of the introduction of Lionfish (Pterois volitans/miles complex) to the Western Atlantic Ocean., None None: None

Scyphers, Steven B. and 8 authors (2014) The role of citizens in detecting and responding to a rapid marine invasion, Conservation Letters Published online: 1-9

Toledo-Hernández, Carlos and 8 authors (2014) Population ecology and genetics of the invasive lionfish in Puerto Rico, Aquatic Invasions 9: in press