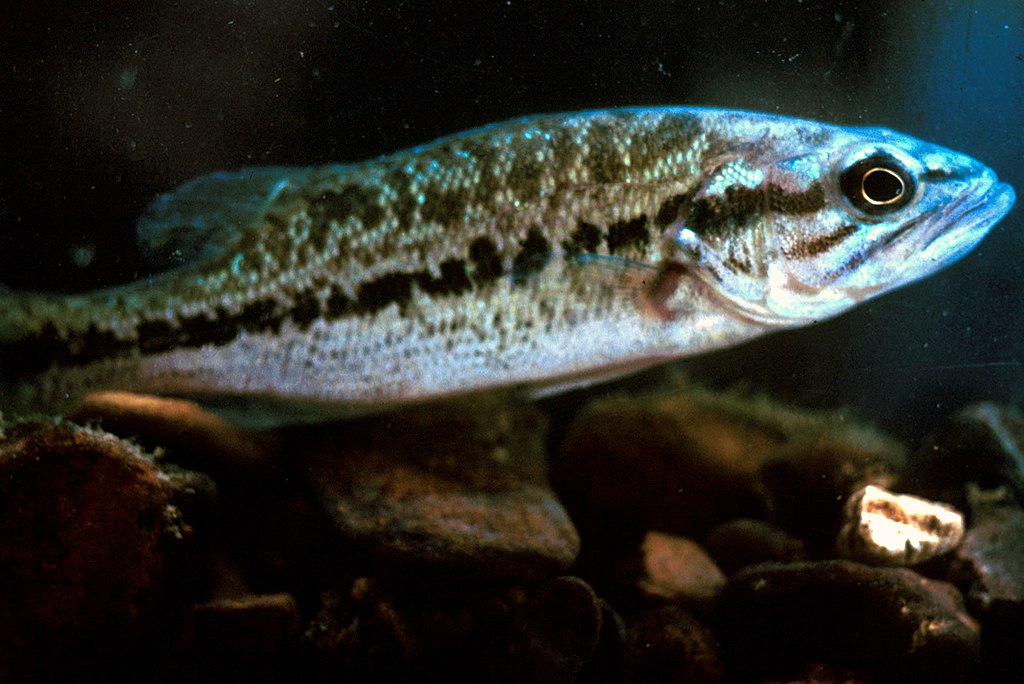 The Spotted Bass belongs to the family Centrarchidae, which include Sunfishes and Black Basses. Members of this family have laterally compressed bodies. Black Basses (Micropterus spp.) are large fish with an elongated body and large mouth extending under or past the eye, a shallowly forked tail fin, and a black spot at the rear angle of the gill cover but no gill flap. Dark brown lines radiate from the snout and back of the eye to the rear edge of the gill cover. The Spotted bass is more streamlined with a smaller mouth than the Largemouth Bass (M. salmoides) and rarely exceed 400 mm in length. The body is light gold-green above with olive mottling on the back and sides, and yellowish white below. Three dark bars radiate from around the eyes, and black blotches run along the lateral line, ending in a solid dark tail spot. Native to the central and southern Mississippi-Gulf region, they have been introduced outside their native range to 26 states, mostly stocked as gamefishes. They can tolerate moderately long cold winters and hot summers and although they are mostly predatory inland freshwater fish, they have been collected at the head of tide and within slightly brackish water, as well as in fresh, tidal areas of estuaries. Preferred habitat includes warm, clear to moderately turbid, moderate gradient-streams and rivers and deeper areas of reservoirs, and they feed on invertebrates, amphibians and other fishes. Spotted Bass support small, localized fishing industries, but probably are not as impactful on their environment compared to Smallmouth and Largemouth Basses.

Spotted Bass (Micropterus punctulatus) has been stocked less widely (12 states) than the Largemouth Bass (M. salmoides and M. dolomieu), mostly by state agencies (Fuller et al. 1999). It is native to the Mississippi basin from Ohio and West Virginia to Kansas, and south to Gulf of Mexico drainages from Georgia to Texas (Page and Burr 1991). It has been introduced outside its native range in 26 US states and South Africa (USGS Nonindigenous Aquatic Species Program 2018).

In 1936–37, Spotted Bass from Ohio ('Kentucky Bass') were introduced to San Joaquin River tributaries in 1937, and became established in the lowermost reaches of Delta tributaries. This species was chosen as having intermediate habitat requirements between the Smallmouth Bass (M. dolomieu) and the Largemouth Bass (M. salmoides), and more suitable for foothill streams and reservoirs. However, success was difficult to determine, due to similarity with the other 'black basses' and hybridization with Smallmouth Bass. The only purebred Spotted Bass were believed to occur in the lowermost reaches of the Cosumnes and Mokelumne rivers (Dill and Cordone 1997). In 1974–1977, Alabama Bass (M. henshalli), then considered a subspecies of M. punctulatus, were stocked in foothill streams and reservoirs, in hopes of developing more extensive populations (Dill and Cordone 1997). 'Spotted Bass' were reported from the freshwater Delta in 1980s, but the exact species identity is unclear (Light et al. 2005; Brown and Michniuk 2007; Cavallo et al. 2014). This fish was present in small (0.7%, Cavallo et al. 2014) to very small numbers (<0.1%) (Brown and Michniuk 2007). Spotted Bass have been introduced to lakes and reservoirs in San Diego, Riverside, and Shasta Counties (Dill and Cordone 1997; USGS Nonindigenous Aquatic Species Program 2018).

On the East Coast, Spotted Bass were stocked in the James River (Appomattox River) and York River systems, in Virginia (South Anna, Pamunkey) in 1976–1979, and now established near the head of tide (Jenkins and Burkhead 1995; Virginia Institute of Marine Science 1998-2005; Virginia Division of Game and Inland Fisheries 2018). In 2005, it was listed in the Virginia Juvenile Striped Bass Survey of tidal waters, where it ranked 75th in relative abundance (Virginia Institute of Marine Science 2005). They have also been introduced to upland rivers from Georgia to North Carolina, from 1962 to 2017 (Rohde et al. 1994; USGS Nonindigenous Aquatic Species Program 2018).

In 1939,120 Spotted Bass were imported to South Africa in order to provide a broodstock for introduction into rivers unsuitable for Largemouth or Smallmouth Bass, because of drought, flooding, or turbidity. They were planted in rivers in Cape and Natal provinces. Some populations persist, but establishment is spotty (Lever 1996).

Spotted Bass was formerly regarded as consisting of two subspecies, (M. p. punctulatus, native to the lower Mississippi -Gulf Basin, and M. p. henshalli (Alabama Spotted Bass), native to a more restricted range. In central Alabama, Micropterus henshalli (Alabama Bass) has been raised to full species status (Baker et al. 2008). Both fishes have been introduced to the San Francisco Bay watershed, and other streams in California, as 'Spotted Bass' in field collections, so we will treat them together, noting the morphological differences. 'Spotted Bass' (Micropterus punctulatus s.l. ) are in many characteristics an intermediate between M. salmoides (Largemouth Bass) and M. dolomieu (Smallmouth Bass). They were not recognized as a distinct from the Smallmouth Bass until 1927 (Hubbs 1927; cited by Jenkins and Burkhead 1993).

Micropterus coosae
Redeye Bass Micropterus coosae has a large mouth, with the upper maxilla extending under the rear half of the eye. The fins are brick red, with a white edge to the upper and lower edges of the tail fin. There are rows of small spots on the sides. Redeye Bass are native to the Coosa River basin of Tennessee, Georgia, and Alabama (Page and Burr 1991). They are introduced to the San Francisco estuary watershed and other basins in California (Dill and Cordone 1997; Moyle 2002).

Micropterus dolomieu
Smallmouth Bass (Micropterus dolomieu) has clear fins, 8-16 dark bars on the side, and lacks rows of spots. It is native to the Great Lakes, upper Mississippi Basin, and is introduced to San Francisco and Columbia River estuaries, and Northeastern estuaries from Maine to Virginia. Smallmouth Bass are found in cool lakes and flowing waters (Page and Burr 1991).

Micropterus salmoides
Largemouth Bass (Micropterus salmoides) has a large mouth, with the upper jaw extending past the eye. The front and rear dorsal are nearly separate. There is a broad, black band extending from the eye to the tail, sometimes broken up into blotches. Largemouth Bass are characteristic of lakes and large rivers, with clear water and dense vegetation. Largemouth Bass are native to the Great-Lakes-Mississippi basin, and the Atlantic Slope from North Carolina to Florida. It is introduced to the Columbia River and San Francisco estuaries, and from Chesapeake Bay to Maine (Page and Burr 1991).

Spotted Bass (Micropterus punctulatus) is a predatory freshwater fish. Spotted Bass mature at year 2 or 3 at 152–323 mm (Jenkins and Burkhead 1993; Moyle 2002). Spawning takes place at 15–19 C. In streams, males excavate and guard nests in shallow water at the edge of pools, or in deeper water on firm or soft bottoms in reservoirs. Females described from an Arkansas reservoir may carry 2800 to 36,000 eggs; nests contained 87 to 3800 larvae. The eggs are guarded by the male, but the larvae are more active, and leave at an earlier age than those of Smallmouth Bass (Jenkins and Burkhead 1993; Moyle 2002).

Spotted Bass (Micropterus punctulatus) are native to the central and southern Mississippi-Gulf region can probably tolerate moderately long cold-winters and hot summers. In experiments, they tolerated temperatures up to 38 °C. Spotted Bass are mostly an inland freshwater fish, but they have been collected at 10 PSU in Biloxi Bay (Peterson 1988). In Chesapeake Bay, they occur primarily just below the Fall Line, at the head of tide, in the James and Pamunkey Rivers (Jenkins and Burkhead 1994; Virginia Division of Inland Fisheries 2018). In the San Francisco estuary, Spotted Bass have been collected in small numbers in the freshwater tidal edges of the Delta (Brown and Michniuk 2007; Cavallo et al. 2014). Spotted Bass are usually considered to be intermediate between Smallmouth Bass and Largemouth Bass in habitat preference in warm, clear to moderately turbid, moderate gradient-streams and rivers, but usually avoiding backwaters with heavy growths of aquatic plants. In reservoirs, adults tend to move into deeper waters. Juvenile Spotted Bass feed on micro-crustaceans and small insects, and as they grow, shift to crayfish, larger insects, and fishes (Jenkins and Burkhead 1993; Moyle 2002). As with the other 'black basses', humans are the chief predators on adults.

Micropterus henshalli (Alabama Bass) was formerly regarded as a subspecies of Micropterus punctulatus and differs somewhat in its habitat preferences, life history, and growth characteristics. Alabama Bass were introduced to California reservoirs, because they were believed to grow faster and live longer in some Alabama reservoirs, and were more tolerant of rapid changes in water levels, and barren or rocky habitat, compared to northern Spotted Bass (Dill and Cordone 1997). The abundance, range, and habitat of M. henshalli, and the occurrence of hybridization in California are unknown.

Spotted and Alabama Bass (Micropterus punctulatus; (M. henshalli ) have been introduced to the San Francisco estuary watershed, as gamefishes. Both species fight well on light tackle, and have supported small, but localized sport fisheries (Dill and Cordone 1997; Moyle 2002). Similarly, in Virginia waters, Spotted Bass fisheries appear to be localized, especially when compared to Largemouth Bass, in the fresh, tidal regions in estuaries (Jenkins and Burkhead 1993; Virginia Division of Game and Inland Fisheries 2018). Ecological impacts of Spotted Bass appear to be small, when compared to those of Largemouth and Smallmouth Bass. This was also true for introductions to South Africa, where establishment was limited by low pH in many rivers (Lever 1996).