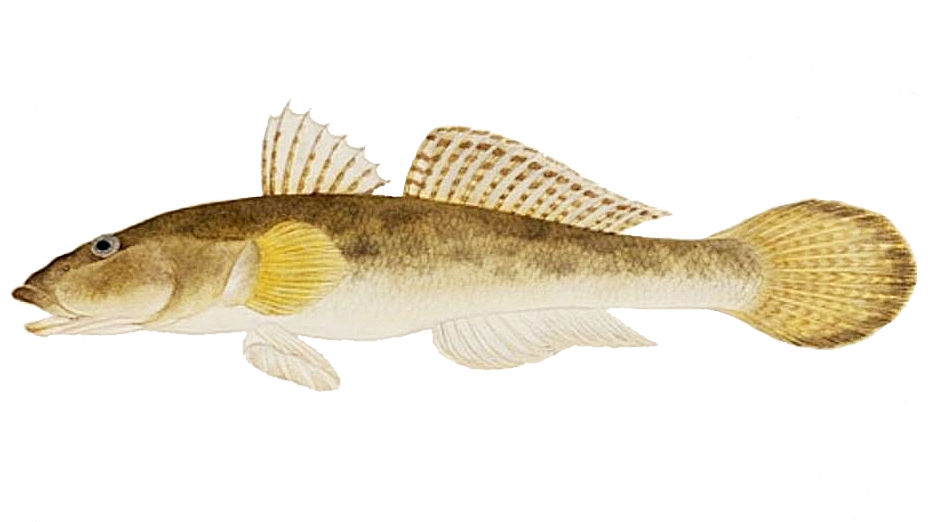 The Yellowfin Goby (Acanthogobius flavimanus) is a coastal and estuarine fish native to the Northwest Pacific. It has a wide range of marine, estuarine, and freshwater habitats and can tolerate a wide range of salinities and temperatures (at least 0-50 PSU, 7-32 C). They require a salinity of at least 5 PSU to breed, but are capable of migrating long distances up rivers. Its native range extents from Peter the Great Bay, Russia, to Kyushu, Japan. It has been introduced to California where its current range extends from Bodega Bay to San Diego. It has also been introduced to Australia. Ballast water discharge is a probable means of introduction, but eggs in fouling or oyster shells is also a possible vectors. It is a suspected competitor with native estuarine fishes and a predator on eggs and larvae, but is also prey for several large predators. Several extirpations of endangered, native Tidewater Gobies (Eucyclogobius newberryi) in coastal California followed the invasion of this species and the Rainwater Killifish (Lucania parva).

Acanthogobius flavimanus (Yellowfin Goby) is a coastal and estuarine fish native to the Northwest Pacific. Its native range extents from Peter the Great Bay, Russia, to Kyushu, Japan (Golikov et al. 1976; Froese and Pauly 2018). This fish enters brackish and fresh water, but requires a salinity of at least 5 PSU for successful development. In 1963, two specimens of A. flavimanus were collected in fresh water in the Sacramento-San Joaquin Delta (Brittan et al. 1963). By 1970 the Yellowfin Goby was widespread and abundant in the entire bay and estuary, and in reservoirs connected to the Delta by canals but located far inland (Brittan 1970). Currently, this fish ranges from Bodega Bay to San Diego (Williams et al. 1008; USGS Nonindigenous Aquatic Species Program 2018). In 1971, A. flavimanus was collected in Sydney, Australia, and later spread to Port Phillip Bay, Victoria, and South Australia (Hoese 1973; Lockett and Gomo 1999; Lockett and Gomon 2001). This fish has probably been transported by ships' ballast water, though some authors have proposed eggs in fouling or oysters as possible vectors (Brittan et al. 1963; Haaker 1979; Middleton 1983; Lockett and Gomon 2001).

Acanthogobius flavimanus was first collected was first collected at Prisoners Point, Venice Island, in the San Joaquin River on January 18, 1963. Another specimen was caught in the Stockton Deepwater Channel on March 29, 1963. Both of these collections were made in tidal freshwater in the San Francisco estuary Delta (Brittan et al. 1963). By 1968, A. flavimanus had been collected through most of the San Francisco estuary from Richardson Bay, near the Golden Gate, throughout the South and San Pablo Bays to the lower Sacramento and San Joaquin Rivers, to the ports of Sacramento and Stockton. Remarkably, large numbers of dead Yellowfin Gobies were found in the San Luis Reservoir in 1967, which is 100 miles southeast of San Francisco. This reservoir receives freshwater through the O'Neill Forebay, which receives water from the Delta through the California Aqueduct and from the Delta-Mendota Canal. The fish were killed by an anoxic event in the reservoir. Also in 1967, one fish was caught in a tributary creek of the Bolinas Lagoon, which is a separate estuary about 15 miles north of the Golden Gate (Brittan et al. 1970). Acanthogobius flavimanus was collected in Tomales Bay in 1970, Estero Americano in Bodega Bay in 1972, and Elkhorn Slough in 1972 (USGS Nonindigenous Aquatic Species Program 2018).

On September 22, 1977 an individual A. flavimanus was photographed in Los Angeles Harbor, and on March 29, 1978 a specimen was collected in Long Beach Harbor. In 1978, more specimens were collected in Newport Beach, the San Gabriel River, and the Long Beach Swimming Lagoon, near the mouth of Los Angeles Harbor (Haaker 1979). The Yellowfin Goby has spread north and south to other southern California estuaries, reaching the San Dieguito River (1984), San Diego Bay (1988), Los Penasquitos Lagoon (1989), and the Tijuana Estuary in 1990 (Williams et al. 1998; Williams et al. 2001), Santa Margarita River (1998, (USGS Nonindigenous Aquatic Species Program 2018) and Ballona Marsh and Mugu Lagoon, near Los Angeles (Swift et al. 1993). Based on their genetic differences, the southern California and Northern California-San Francisco Bay populations are suspected of being separate introductions (Nielson and Wilson 2005; Hirase et al. 2017). The San Francisco Bay population was most similar to fish from Tokyo Bay, but the origin of the southern population was not clear (Hirase et al. 2017).

In 1971, a specimen of Acanthogobius flavimanus was collected in Sydney Harbour, New South Wales. By 1973, 17 fish had been collected (1971, Hoese 1973). This Goby was found in two locations in New South Wales in the late 1970s, Botany Bay and the Hawkesbury River, in Newcastle (Middleton 1982; Lockett and Gomon 2001). In 1990, it was collected in Port Phillip Bay, Victoria, and was found to be established in the northern part of Bay (Lockett and Gomon 2001). It has not undergone the rapid geographical and population expansion noted in California, perhaps because of warmer temperatures (Lockett and Gomon 2001), and/or of low genetic diversity (Hirase 2017).

Acanthogobius flavimanus (Yellowfin Goby) is a coastal and estuarine fish that enters brackish and fresh water. It has the typical features of the family Gobiidae, including the two pelvic fins united to form a conical sucking disk, two dorsal fins (the anterior fin is spiny and the posterior one is soft), and eyes near the top of the head. The dorsal fins have eight contiguous spines and 14 rays. The lateral line is not noticeable. Scales are large, with about 55 to 65 in the mid-lateral series. The anal fin is about equal in length to the soft dorsal fin, with 11-12 rays. The body is somewhat elongated, rounded anteriorly, and laterally compressed posteriorly. The head is about 30% of body length. The maxillae almost reach the midpoint of the eyes. The body is light brown, with five to seven diffuse, dusky dark-brown patches along each side. The dorsal fins are speckled with dark brown dots. There are about ten dark zigzag bands on the caudal fin. Yellowfin gobies reach 250 and occasionally 300 mm (Miller and Lee 1972; Golikov et al. 1976; Eschmeyer and Herald 1983; Froese and Pauly 2018; California Fish Website 2018).

Acanthogobius flavimanus (Yellowfin Goby) is a coastal and estuarine fish that enters brackish and fresh water. Male fish mature after one year and females in two years at 190-233 mm length (Suzuki et al. 1989; California Fish Website 2018). Fish in freshwater move into brackish waters with salinities above 5 PSU to breed. Males excavate a Y-shaped vertical nest in mud or coarse sand. The nest consists of two tunnels, which join to form a chamber. Females attach the club-shaped eggs to the roof of the tunnel and the males fertilize and guard them. The eggs take about 28 days at 13 C to develop. The newly hatched larvae are about 4.5 mm long and are planktonic, feeding on copepods (Dotu and Mito 1955; California Fish Website 2018). The larvae migrate vertically in the water column, moving upward on incoming tides and downward on outgoing times, which favors upstream transport (Bennett et al. 2001).

Acanthogobius flavimanus (Yellowfin Goby) has become an especially abundant estuarine fish in the San Francisco estuary and is widespread on the coast of central and southern California. It is a suspected competitor with native estuarine fishes and a predator on eggs and larvae (Meng et al. 1994; Lafferty et al. 1999). It is prey for larger predators, including the introduced Striped Bass (Morone saxatilis, Nobriga and Feyrer 2007), and native Harbor Seals (Phoca vitulina richardii, Gibble and Harvey 2015). Several extirpations of endangered, native Tidewater Gobies (Eucyclogobius newberryi) in coastal California followed the invasion of Rainwater Killifish (Lucania parva) and Yellowfin goby (Acanthogobius flavimanus) (Lafferty et al. 1999).

Dimitriadis, C and 12 authors (2020) Updating the occurrences of Pterois miles in the Mediterranean Sea, with considerations on thermal boundaries and future range expansion., Mediterranean Marine Science 21: 62-69.

Meng, Lesa, Moyle, Peter B., Herbold, Bruce (1994) Changes in abundance and distribution of native and introduced fishes of Suisun Marsh, Transactions of the American Fisheries Society 123: 498-507