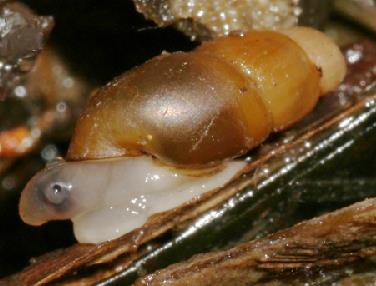 Cecina manchurica is a small, semi-terrestrial marine snail commonly known as the Oriental Cecina. It is native to the Northwest Pacific from southern Russia, the Kurile Islands, and southern Japan where it inhabits the upper intertidal zone of marshy and rocky shores. It has been introduced to Washington and British Columbia. In its introduced range it has been found in a variety of habitats including piles of old oyster shells, salt marsh edges, logs, and drift piles of seaweed and seagrasses. No impacts have been reported for this species in its non-native range.

Cecina manchurica is native to the Northwest Pacific from the southern Kurile Islands, to the adjacent Russian coast of the Sea of Japan and Kyushu, Japan (Adams 1864; Golikov et al. 1976). It has been introduced to Washington State and southern British Columbia, most likely with Pacific Oysters from Japan (Morrison 1963; Carlton 1979; Carlton 1992; Forsyth 2003).

Cecina manchurica was first discovered in North America in 1961, under logs and drift algae at the high-tide line in Chuckanut Bay, Washington (WA) (Morrison 1963). It was subsequently found in Birch Bay, WA (Duggan 1963, cited by Carlton 1979); Willapa Bay, WA (in 1963 and 1977; Hanna 1966; Carlton 1979); and Boundary Bay, British Columbia (Carlton 1992; Klinkenberg 2013). Habitats in which it has been found include piles of old oyster shells, salt marsh edges, logs, and drift piles of seaweed and seagrasses (Adams 1864; Morrison 1963; Golikov et al. 1976; Carlton 1979). A likely vector is transplantation of Pacific Oysters (Crassostrea gigas); although not the oysters themselves, but the boxes, baskets, and racks used in shipping and rearing oysters. These are often stored on beaches, near oyster beds (Carlton 1979).

Cecina manchurica is a small, semi-terrestrial marine snail, which inhabits the upper intertidal zone of marshy and rocky shores. The shell is dextrally coiled, thin-walled and translucent. Adult shells have 3-4 whorls with deep sutures and a highly eroded spire, resulting in a lumpy, elongated-ovoid shape. The shell is marked by fine growth lines with a dark brown edge around the aperture. Shells grow up to 7.2 mm in length and about 3 mm in diameter. The border of the mouth is dark brown. Description from: Adams 1864; Golikov et al. 1976; Prozorova 2003.

Cecina scarltoi
Native to the Northwest Pacific coast of Russia

Cecina tatarica
Native to the Northwest Pacific coast of Russia

Cecina manchurica, the Oriental Cecina, is a small, semi-terrestrial marine snail found in the upper intertidal zone of marshy and rocky shores under logs, seaweed, in piles of oyster shells, etc. (Adams 1864; Golikov et al. 1976). We have no information on the mode of reproduction of C. manchurica. It is found on poly-euhaline shores (Prozorova 2003), but in its upper-intertidal habitat it is probably frequently exposed to low salinity during rainfall, as well as a wide range of temperatures. Likely foods include bacteria, blue-green algae, diatoms, macroalgae, fungi, and the epithelial cells of vascular plants, similar to the diet of Myosotella myosotis (Berman and Carlton 1991).

No impacts have been reported for Cecina manchurica in its introduced range.

Prozorova, L. A. (2003) Morphological features of supralittoral mollusks of the genus Cecina(Gastropoda: Pomatiopsidae) from Peter the Great Bay, Sea of Japan, Russian Journal of Marine Biology 29(1): 49-52