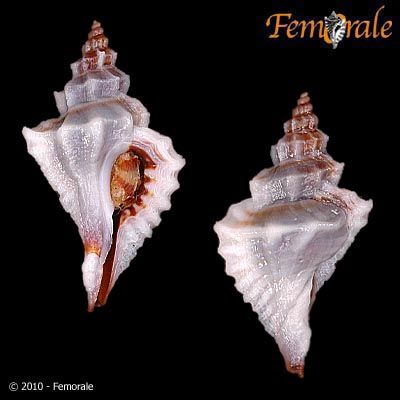 Eupleura sulcidentata is a predatory gastropod commonly known as the Sharp Ribbed Drill. It resembles the Oyster Drill (Urosalpinx cinerea) and other small predatory whelks. It is native to the tropical and subtropical Western Atlantic, including Florida, the Bahamas, and Cuba. Introduced specimens were found in Virginia, possibly transported with oyster shipments or through hull fouling on recreational boats. In its native range it inhabits shallow muddy areas and oyster reefs. Its establishment status in Virginia is currently unknown and no ecological or economic impacts have been reported.

Eupleura sulcidentata is a predatory gastropod native to the tropical and subtropical Western Atlantic over a latitudinal range of 22-30°N, including the Gulf and East Coasts of Florida, the Florida Keys, the Bahamas, and the north coast of Cuba (Abbott 1974; Rosenberg 2003). On the Atlantic Coast, its northern limit was believed to be Lake Worth Inlet, Florida (FL) (Lyons 1977), but it has since been collected in the Indian River Lagoon (Mikkelsen et al. 1995; Florida Museum of Natural History 2009). It ranges to Tampa Bay (St. Petersburg) and Cedar Key, FL on the Gulf Coast (Rosenberg 2013).

In 1996, Eupleura sulcidentata was collected in Chincoteague Bay at Mosquito Creek, Virginia in 2 m of water, and intertidally at Memorial Park, on the channel between Chincoteague and Assateague Islands (Prezant et al. 2002). Oyster transplants are a possible vector (Prezant et al. 2002), but transport of snails or egg capsules on recreational boats is also a possibility. This species was present in two separate locations, but the occurrence of an established population is not known.

Eupleura sulcidentata is a marine snail, resembling the familiar Oyster Drill (Urosalpinx cinerea) and other small predatory whelks. The shell is thick, solid, and dextrally coiled with 5 whorls which are sharply angled with spiny ribs. The surface has about 11 well-defined vertical ribs. The siphonal canal is moderately long and dorsally curved. The lip of the aperture is very thick, with 6-8 bead-like teeth and two large, thin, and sharp lateral ribs, called varices (singular = varix). The shell is laterally compressed and looks oval, as seen from the top. The shell reaches about 25-30 mm in length. The color ranges from gray, chocolate brown, tan, or pinkish, sometimes with spiral brown bands. Description from: Abbott 1974, Lyons 1977, and Lee 2013.

Urosalpinx perrugata
Known as the Gulf Oyster Drill, found on both coasts of Florida

Eupleura sulcidentata is a marine snail, with separate sexes. Eggs are laid in tubular capsules about 4-5 mm long, usually under hard objects or among worm tubes in groups of 3-13 capsules. Development is direct and about 4-9 juveniles hatch out of each capsule (d'Asaro 1986).

It inhabits shallow grassy and muddy areas, including oyster reefs, in Florida, the Bahamas, and Cuba, often among shell debris but also clinging to bottles and cans (Abbott 1974; Lyons 1977). The temperature and salinity tolerances of E. sulcidentata are not well known, but their native range and habitat suggests limited tolerance to low temperatures and salinity. This predatory gastropod uses its radula to drill through the shells of other gastropods, bivalves, and barnacles (Herbert and Paul 2008).

Establishment of Eupleura sulcidentata is uncertain in Chincoteague Bay – its only known introduced location (Prezant et al. 2002). No impacts have been reported.