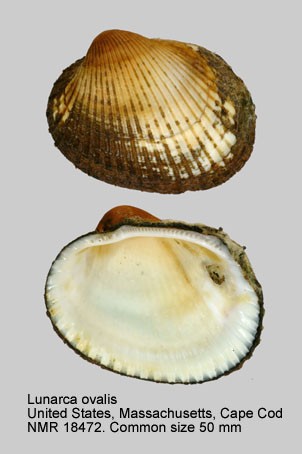 Anadara ovalis is a marine bivalve, commonly known as the Blood Ark. It has a thick, strongly ribbed shell, and its blood contains hemoglobin (rare in bivalves), which makes it bright red. It is native to the Northwest Atlantic, being rare in Massachusetts Bay, but common in coastal waters from Cape Cod to the Gulf of Mexico. A dead shell was found in 1967 at Coyote Point, on San Francisco Bay, but no subsequent live or dead specimens have been found. It usually settles on mud or sand, but will occasionally attach to rocks and shells with byssus threads. It can survive at polyhaline to euhaline salinities (18-35 PSU). There are no reported impacts for this species.

*Beyond its native range, this species is not established in North America.

Anadara ovalis is native to the Northwest Atlantic. It is rare in Massachusetts Bay, but common in coastal waters from Cape Cod to the Gulf of Mexico. It is usually found on mud or sand, at polyhaline to euhaline salinities (18-35 PSU) (Wass et al. 1972; Morris 1975; Gosner 1978). It was among the 20 most abundant bivalves in Long Island Sound in the 1800s (Miller 2000).

Anadara ovalis is a marine bivalve with a thick, strongly ribbed shell. The hinge line bears numerous teeth, arranged in a line on both valves. Both valves have prominent beaks which almost come into contact. The shell is heart-shaped in a side view. Both shells have about 35 radiating ribs. The shell is white, but it is covered with a thick and bristly greenish-brown periostracum. The blood of A. ovalis contains hemoglobin (found in few bivalves), and is bright red. This bivalve does not have a siphon. Its shell typically reaches 50 mm. Ark shells occasionally attach to rocks and shells with byssus threads. (Description from: Morris 1975; Gosner 1978)

Anadara ovalis has not established an introduced population and has no known impacts beyond its native range.

Morris, Percy A. (1975) A field guide to shells of the Atlantic, Houghton-Mifflin, Boston. Pp. <missing location>