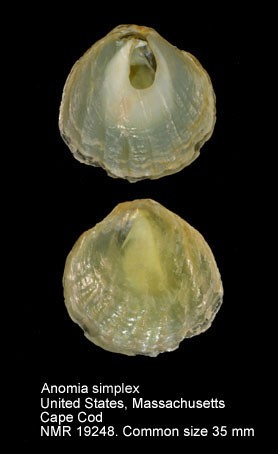 Anomia simplex, known as the Common Jingle Shell, is a marine bivalve with a thin, translucent shell. It is native to the Northwest Atlantic from Cape Cod to Brazil. Three dead shells were dredged from Atlantic oyster beds in South San Francisco Bay, California in 1912, but no live specimens were found. It attaches to hard substrates, such as rocks, shells, wood and man-made structures and can be found in shallow coastal waters in upper mesohaline to euhaline salinities. There are no impacts reported for this species.

*Beyond its native range, this species is not currently established in North American waters.

Image Credit: of the World Register of Marine Species (WoRMS), via the Natural History Museum, Rotterdam through the Creative Commons CC BY-NC-SA 3.0 License. The image was not altered.

Anomia simplex is native to the Northwest Atlantic from Cape Cod to Brazil. It is found in shallow coastal waters and in upper mesohaline to euhaline salinities. It settles on hard substrates, and is frequently associated with oysters (Wass 1972; Morris 1975; Gosner 1978).

Anomia simplex is a marine bivalve with a thin, translucent shell, often called a 'potato chip shell'. The lower (right) valve is flat and permanently attached to a hard substrate by a stalk-like byssus, which passes through a hole in the shell near the hinge (Morris 1975; Gosner 1978, Yamaguchi 1998). The upper (left) valve is dome-like. The shell is roughly circular, but the margins can be undulating or jagged. The usual size range is 25-50 mm, but can occasionally reach 75 mm. The color varies from sulfur yellow to copper red, and sometimes silvery, grey, or black. The shell attaches to rocks, shells, wood, or man-made structures (Morris 1975; Gosner 1978).

Adults of Anomia simplex are firmly attached to hard substrates, such as rocks, shells, wood, and man-made structures (Morris 1975; Gosner 1978; Yamaguchi 1998). These bivalves are suspension feeders and their larvae are planktotrophic (Chanley and Andrews 1971). After settlement, postlarvae are mobile for a time, and then attach to a surface by a calcified byssus. Up to a size of 10 mm, they can detach from a surface, and reattach. As they develop further, their ability to change their position or orientation decreases (Yamaguchi 1998).

Anomia simplex is known as an introduced species only from three dead shells on the West Coast, and has had no known impacts outside its native range.

Morris, Percy A. (1975) A field guide to shells of the Atlantic, Houghton-Mifflin, Boston. Pp. <missing location>