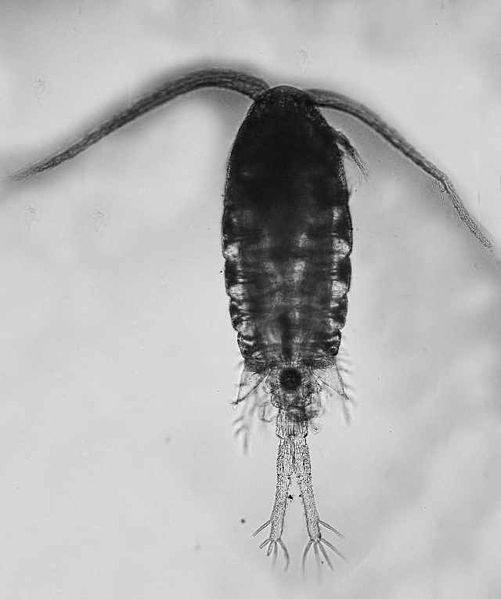 Eurytemora carolleeae is a planktonic calanoid copepod, recently separated from the circumboreal E. affinis species complex. Its native range extends from the St. Lawrence River, Canada to the St. John’s River, Florida. It has been introduced to the Pacific coast of North America in San Francisco Bay, California and Grays Harbor, Washington. It is also known from the Great Lakes and the Gulf of Finland in the Baltic Sea. It is found in salt marshes and estuaries with low-salinity waters. It is abundant in low-salinity waters in San Francisco Bay, where it is a grazer on phytoplankton populations and a major food source for larval fish.

Eurytemora carolleeae was recently separated from the circumboreal E. affinis species complex (Lee 2000; Alekseev & Souissi 2011). Lee (2000), using mitochondrial RNA and genomic DNA, divided Eurytemora 'affinis' into a number of clades and subclades. Several of the subclades of Eurytemora ‘affinis’ occur in very close proximity, but appear to be reproductively isolated. The ‘Atlantic’ subclade, subsequently named E. carolleeae, ranges from salt marshes in the St. Lawrence River, Canada to the St. Johns River, Florida (Lee 2000; Alekseev & Souissi 2011). Genetic analysis indicates that this species has been introduced to at least two estuaries on the Pacific coast of North America and to the Great Lakes (Lee 2000), and also to the Gulf of Finland, Baltic Sea (Alekseev et al. 2009). This copepod is euryhaline and capable of surviving and reproducing in both fresh and marine waters (Lee 2000).

Eurytemora carolleeae was probably introduced to the Great Lakes by ships using the St. Lawrence Seaway (Mills et al. 1993; Lee 2000). It was first collected in Lake Ontario in 1958, and reached Lake Superior by 1972. In the Lakes, it is most abundant in harbor areas (Mills et al. 1993).

In 2007, a genetic survey of E. affinis from the Gulf of Finland, Russia (Baltic Sea) found that some of the E. affinis from two bays in the inner Gulf (Luga and Neva Bays) matched the Atlantic subclade (now E. carolleeae), and were distinct from the native Baltic form (Alekseev et al. 2009). Some copepods from the Gulf of Riga, the Netherlands; Gironde, Loire and Seine estuaries in France; and the Dassau River estuary, Germany, show morphological characters of E. carolleeae, but have not yet been confirmed genetically (Sukhikh et al. 2013).

Adult females have six prosomal segments, of which the posterior most has large angular projections ('wings'), which reach beyond the genital segments. The caudal rami are elongated to about 7 X the width. The antennules (1st antennae) are short and curved convexly, and have 24 segments but are shorter than the prosome. The caudal rami and the last urosome segment are covered with dense spines (Alekseev and Souissi 2011). Two of the four urosome segments are fused to form the genital segment. In E. carolleeae, there are wing-like outgrowths on the fused genital segment (absent in European E. affinis from the type locality) (Alekseev and Souissi 2011; Sukhikh et al. 2013). The mid-lateral sides of the genital segment (Urosome segment 2) are expanded into short rounded processes. The coxae (basal segments) of swimming legs 1-4 have long setae at the inner side (Alekseev and Souissi 2011). The 3rd segments of the 5th swimming legs (P5, periopod, swimming leg) are stretched into broad, inward-pointing, thorn-like spurs, which are symmetrical and oriented under 45 degrees to the segment axes with two sub-equal spines (Alekseev and Souissi 2011). The eggs are carried in a single mass under the urosome. The overall length of the female is 1.14-1.48 mm (Gerber 2000; Johnson and Allen 2005).

Adult males also have six prosomal segments, but have a slender body, tapering rearwards, and lacking the 'wings' of the female form. Instead, the last prosomal segment is rounded. There are five fairly uniform urosomal segments. The caudal rami are long and narrow, about 10 X the width. The last urosomal segment and the sides of the rami are covered with fine setae, but the dorsal and ventral surfaces are naked (Alekseev and Souissi 2011). There are spines on the right antennule segments 10 and 11. The right antennule (1st antenna) is geniculate (jointed) at segment 19, and the 2 terminal segments (20, 21) beyond the joint, are 1.1 X the length of segment 19, proximal to the joint. The coxae of swimming legs P1-P4 have long setae on the inner sides of the coxae. The P5 legs are asymmetrical. The right leg is 4-segmented – the 2nd segment of right P5 has a triangular swelling (Gerber 2000; Johnson and Allen 2005). The basal segment of the left P5 is more or less cylindrical in shape, provided with two small rounded outgrowths (a larger triangular swelling occurs in E. affinis). The second (distal) segment of the left exopod has two lobes at the end (Alekseev and Souissi 2011).

Eurytemora affinis was described from the Elbe River in Germany, and reported from brackish and coastal fresh waters around the Northern Hemisphere. However, morphological and ecological differences have long been noted over the species' broad range, resulting in multiple named species of uncertain status (Lee 2000; Alekseev and Souissi 2011). Genetic analysis by Lee (2000) identified at least six distinct lineages, for Europe, Asia, North Pacific, Gulf of Mexico, and two sympatric (Atlantic and North Atlantic) from the East Coast of North America. The morphological differences among clades are small, compared to the genetic divergences among populations, complicating the taxonomy of this species complex (Lee and Frost 2002). A more extensive morphological analysis found several important morphological characters (noted above), which clearly separate the North American E. carolleeae from the European E. affinis sensu stricto (Alekseev and Souissi 2011).

Developmental stages of E. carolleeae (as E. affinis) from Woods Hole, Massachusetts are described and compared with E. americana and E. herdmanni by Katona (1971).

Eurytemora affinis (North Pacific subclade)
This cryptic species was detected in the Columbia River estuary and Nitinat Lake, British Columbia. It overlaps with an introduced population of the Atlantic subclade, but is reproductively isolated from it.  'Atlantic' animals from Grays Harbor, Washington (WA) crossed with 'North Pacific' animals from the Columbia River, failed to produce viable offspring (Lee 2000). 'Atlantic' and 'North Atlantic' animals could not be distinguished morphologically (Lee and Frost 2002).

Eurytemora affinis (senso stricto)
This cryptic species shows some morphological divergence from the North American clades of 'E. affinis' (Lee and Frost 2002). A detailed redescription of E. affinis from the type locality, the Elbe River, was made by Alekseev & Souissi (2011). It is not clear whether the other commonly used names (hirundo and hirundoides) refer to separate species. Sukhikh et al. (2016) have compared genetics and morphology E. affinis population from the Baltic to central France, and concluded that the the variation represented several subspecies.

Eurytemora americana
Native to NW Atlantic and NE Pacific; estuarine, but rare in completely fresh water; P5 structure in males and females is distinct from the E. affinis complex.

Planktonic calanoid copepods mate in the water column. Males use their modified antenules and 5th pair of swimming legs to grasp the female and transfer spermatophores to the female's genital segment. Female Eurytemora spp. carry eggs in a single cluster under the abdomen (Katona 1971; Johnson and Allen 2005). Eggs hatch into nauplii which go through six stages. The first stage, NI, has 3 pairs of appendages and is unsegmented - each molt has additional appendages and/or more differentiation of segments. The sixth stage (NVI) molts into a first copepodite stage (CI), with the basic form of the adult and fully differentiated feeding structures, but with only two pairs of swimming legs and only one urosomal segment. The copepod goes through five additional molts, with increasing numbers of swimming legs, urosomal segments, and sexual differentiation. The sixth (CVI) stage is the male or female adult (Katona 1971; Barnes 1983). Time from hatching to maturity ranged from ~80 days at 5.5 C to 10 days at 25 C (Heinle and Flemer 1975).

Eurytemora carolleeae, like other copepods of the E. affinis complex, is characteristic of estuaries with low-salinity waters (Esterly 1924; Newell and Newell 1977; Lee 2000).  It is capable of completing its life cycle in freshwater, and inhabits tidal fresh waters, freshwater coastal lakes, and has colonized the Laurentian Great Lakes (Lee 2000; Lee and Petersen 2002; Lee et al. 2004). Populations in the Great Lakes show rapid evolution of freshwater tolerance, coupled with a reduction in seawater tolerance (Lee et al. 2004). Egg-bearing females in calm waters tend to avoid surface waters by day and cluster around vegetation (Fofonoff, personal observations). All life stages feed on phytoplankton, although adults may also capture ciliates, rotifers, and copepod nauplii (Barnes 1983).

The full impacts of the invasion of Eurytemora carolleeae in San Francisco Bay on the native zooplankton community are unknown. It is possible that the E. carolleeae filled an empty niche, with few brackish-water copepods being present, or it could have replaced a native population of the Pacific form of E. 'affinis' which was a numerically dominant copepod in the tidal-fresh to mesohaline regions of the San Francisco Bay estuary (Esterly 1927; Ambler 1986). The copepod 'E. affinis' was found in the earliest surveys of the estuary (Esterly 1927), but we have limited knowledge of the interactions between E. carolleeae and E. affinis within the bay. Research shows that E. 'affinis' was partially replaced by introduced Asian copepods, beginning in the 1970s, with the invasion of Sinocalanus doerri, and to a greater degree the invasion of Pseudodaiptomus forbesi (Baxter et al. 2007). The invasion of the clam Corbula amurensis also resulted in a dramatic decline in zooplankton abundance throughout the bay (Kimmerer et al. 1994).

Dodson, Stanley I.; Skelly, Daniel A.; Lee, Carol Eunmi (2010) Out of Alaska: morphological diversity within the genus Eurytemora from its ancestral Alaskan range (Crustacea, Copepoda), Hydrobiologia 653: 131-148

Lee, Carol Eunmi and 5 authors (2013) Feasting in fresh water: impacts of food concentration on freshwater tolerance and the evolution of food X salinity response during the expansion from saline into fresh water habitats, Evolutionary Applications 6: 673-684

Strasser, Carly A.; Lewis, Mark A.; DiBacco, Claudio (2011) A mechanistic model for understanding invasions: using the environment as a predictor of population success, Diversity and Distributions published online: 1-15