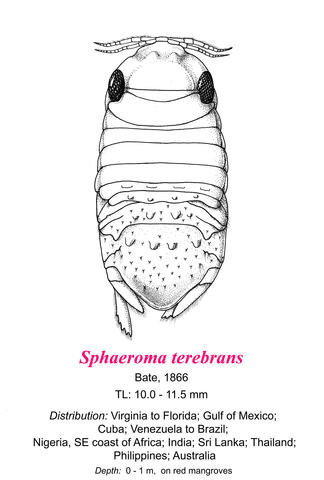 Sphaeroma terebrans is a wood-boring mangrove isopod. It was first described from Brazil, but is thought to be native to the Indo-Pacific and likely introduced to the Atlantic on the hulls of wooden ships sometime before 1850. It is introduced throughout the Western Atlantic (South Carolina to Venezuela and Brazil) and Western Africa (Nigeria to South Africa). It occurs in warm-temperate to tropical climates on mangrove roots, salt marshes, and man-made structures such as buoys, piers, and ship hulls. It plays an important role in some ecosystems by recycling dead wood and regulating the growth of mangroves. However, its direct impacts on mangrove communities is mixed, and in some cases has negative impacts on mangrove growth, while in others, it appears to stimulate productivity.

Sphaeroma terebrans was described by Bate in 1866, from Brazil (Richardson 1905). It is now widely distributed in tropical-subtropical regions, including the Indo-Pacific from Taiwan to Australia; South Africa and along the West coast of Africa; and the Atlantic coast of South and North America, where it has been collected as far north as Virginia (Schultz 1969; Harrison and Holdich 1989; Kensley and Schotte 1989; Davidson et al. 2014). It was originally described from Brazil in 1866, but its close affinity to Indian Ocean species, its absence of planktonic larvae, and the well documented recent introductions of related Indo-Pacific species (S. annandalei, S. walkeri, S. quoianum) indicate that S. terebrans was probably transported to the Atlantic on the hulls of wooden ships before 1850 (Carlton and Ruckelshaus 1997). Carlton and Ruckelshaus (1997) predict that no evidence of S. terebrans boring into mangrove roots will be found in sediments predating European colonization. Genetic analysis indicates that 'S. terebrans' is a complex of at least four species (Baratti et al. 2005; Baratti et al. 2011). Two of these clades (A and B) coexist on the Indian Ocean coast of Africa. Populations in Florida and Brazil were assigned to Clade C, closely related to Clade B. Baratti et al. (2005 and 2011) attribute the global distribution of these forms, with subsequent speciation to natural dispersal, by rafting. However, they have examined only a small portion of the range of S. terebrans and cannot exclude the possibility that species C exists elsewhere in the Indo-Pacific.

The first North American record of Sphaeroma terebrans (as S. destructor), that we know of, was from Crescent City, Florida, near the headwaters of the St. Johns River in 1881 (US National Museum of Natural History 2009). Another collection was made in the Colleton River, South Carolina in 1891 (US National Museum of Natural History 2009). This isopod was formally described as S. destructor from the pilings of a bridge in freshwaters of the St. Johns River, Palatka, Florida (Richardson 1897). It was collected near Lake Pontchartrain, Louisiana, in 1906 (US National Museum of Natural History 2009). The regular range of this isopod appears to be from South Carolina to Texas, and southward to Cuba, Belize, and Brazil (Richardson 1897; Richardson 1905; Wallour 1960; Menzies and Frankenberg 1966; Miller 1968; Kensley and Schotte 1989). In Florida, S. terebrans is distributed around much of the peninsula, but was absent from about half of the 51 sites surveyed, including the Keys and the southernmost tip (Conover and Reid 1975). Sphaeroma terebrans was recorded only once from Chesapeake Bay, from the hull of a boat in Urbanna, Virginia, near the mouth of the Rappahannock River (Miller 1968; Van Engel 1972; United States National Museum of Natural History collections). It was considered a 'stray, unlikely to become established' (Van Engel 1972).

Sphaeroma terebrans has a compact, convex, elliptical body, which is about twice as long as it is wide. The posterior-dorsal surface of the body, and particularly the pleoteloson, is covered with tubercles. The head is approximately semicircular, with prominent eyes, composed of many ocelli. Antenna 1 has a flagellum of 11 segments and extends to the posterior edge of Peraeonite 1. Antenna 2's flagellum has 16 segments and reaches the posterior edge of Peraeonite 2. The peraeonites are roughly equal in width. Peraeonites 2-4 each bear a broad transverse ridge, while Peraeonites 4, 6, and 7 each bear four large tubercles. The pleotelson is roughly triangular and covered with tubercles. Many of the tubercles bear clusters of hairs. Pereiopods 1-3 bear dense plumose setae on the upper (anterior) surface of segments 3-4, an adaptation for filter-feeding. The outer edges of the exopods of the uropods each bear five prominent teeth. Adults are 8-12 mm long and are brown-to-reddish brown. They frequently roll into balls when disturbed. This description is based on: Richardson 1905, Van Name 1936, Schultz 1969, Harrison and Holdich 1984, Kensley and Schotte 1989, Theil 1999, and Hossain and Bamber 2013.

Isopods identified as S. terebrans are widely distributed in subtropical and tropical waters, and show substantial morphological and genetic variation. Specimens from the Western Atlantic were described as S. destructor (Richardson 1897, cited by Richardson 1905). Sphaeroma terebrans is usually treated as synonymous with S. destructor (Van Name 1936; Miller 1968; Harrison and Holdich 1984), but sometimes with uncertainty (Kensley and Schotte 1989). Genetic studies (Baratti et al. 2005; Baratti et al. 2011) indicate a high degree of genetic diversity, suggesting that 'S. terebrans' is a complex of several species. However, some of the sharpest differences are between Clades A and B, both on the coast of East Africa, while the Western Atlantic clade (Florida-Brazil) is closely related to Clade B. The number of sites sampled was relatively small, compared to the large range of the species. Therefore, further genetic studies are needed to describe the genetic diversity and biogeographic history of the species.

Sphaeroma terebrans has separate sexes, with internal fertilization, brooded young and direct development. Females carry 10-80 embryos, with broods tending to increase with body size from 7.5 to 12 mm body length. Sphaeroma terebrans exhibits extended parental care, in which early juveniles remain in the parental burrow until they develop the ability to burrow and filter-feed. Females usually host 5-20 juveniles in their burrows (extremes 1-58). Juveniles in burrows were usually 2-3 mm in size. Males do not remain in the females' burrows after copulation. In the Indian River Lagoon, Florida, juveniles were scarce in January through March, and most abundant and June (Thiel 1999).

Sphaeroma terebrans occurs in warm-temperate to tropical climates, and tidal fresh to euhaline waters (Richardson 1905; Van Name 1936; Kensley and Schotte 1989; Wilkinson 2002). It bores into mangrove roots, Bald Cypress roots, and roots of fresh-brackish marsh plants (at least six different species). Borers were found in intertidal and shallow subtidal pilings, rotten wood, and Styrofoam floats (Richardson 1905; Rehm and Humm 1973; Estevez 1994; Wilkinson 2002). In more saline waters in Florida and the Caribbean, the most common substrates are the prop roots of Red Mangrove (Rhizophora mangle) (Rehm and Humm 1973; Brooks 2004; Brooks and Bell 2005; Davidson et al. 2016). This isopod is also occasionally found in branches and roots of White (Laguncularia racemosa) and Black Mangroves (Avicennia nitida). Burrow length is usually correlated with isopod size and the largest burrows reported (9-12 mm) were made by isopods 7-9 mm long. Animals from brackish-water areas had normal burrows at low (3 PSU) and medium salinities, but greatly reduced burrowing at high (30 PSU) salinity. However, effects of long-term acclimation and genetic variation were not examined (John 1970). There has been some debate as to whether S. terebrans obtains any nutrition from the wood or plant material that it consumes. A recent morphological study concluded that S. terebrans primary feeds by suspension-feeding on detritus and phytoplankton, and uses the wood primarily as shelter (Si et al. 2002). This isopod's burrow may limit predation.

A commensal isopod, Iais floridana has been found living in the burrows of S. terebrans in the Indian River Lagoon, Florida. This isopod has not been found elsewhere, but it closely resembles the Indo-Pacific I. singaporensis (Kensley and Schotte 1999). We consider I. floridana a likely introduction. Its effects on S. terebrans have not been studied, but a similar commensal, I. californica had no effects on the growth and survival of its host, S. quoianum, introduced to the West Coast (Rotramel 1975). Another, more unusual interaction with an isopod species, occurs in Florida, when juveniles of S. quadridentata invade the burrows of female S. terebrans, apparently benefiting from the other species parental care. The presence of the invading juveniles may decrease the duration of parental care for the females' own juveniles (Thiel 2000).

In Florida and other tropical regions, Sphaeroma terebrans plays an important role by recycling dead wood (Becker 1971) and regulating the growth of mangroves (Rehm and Humm 1973; Ribi 1982; Simberloff et al. 1978; Perry and Brusca 1989; Davidson et al. 2014), and also as a borer in tidal marsh vegetation (Estevez 1994). This isopod is also an economically important borer on submerged wooden structures, such as pilings (Atwood 1920; Becker 1971; Wilkinson et al. 2002). It has been found burrowing in Styrofoam floats, and damaging them in Lake Pontchartrain, Louisiana; Colon, Panama; the Philippines and Taiwan (Wilkinson et al. 2002; Davidson 2012).

Herbivory- S. terebrans does not consume wood directly, but uses it for shelter, tunneling into it and filter-feeding, and also probably feeding on bacteria, fungi etc. growing on the tunnel walls (Becker 1971; Estevez 1945). However, a cellulase has been reported from some wood-boring Sphaeroma spp, so direct consumption of wood cannot be ruled out (Becker 1971). A more recent morphological study concludes that S. terebrans primary mode of feeding is suspension-feeding on detritus and phytoplankton (Si et al. 2002). Sphaeroma terebrans burrows into the aerial roots of Rhizophora mangle (Red Mangrove) (Humm and Rehm 1973), hollowing them out, and also into the rhizomes of Juncus roemerianus (Black Needle Rush) plants in tidal marshes (Estevez 1994).

Habitat Change – S. terebrans clearly has an important role in the dynamics of Rhizophora mangle (Red Mangrove) communities, but the precise nature of its effects on mangrove communities has been subject of study and debate. Initially, it was regarded as a destroyer of mangroves (Humm and Rehm 1973), but S. terebrans were also found to increase the frequency of root branching (Simberloff et al. 1978) and to differentially infest roots farther from established roots, resulting in increased density of roots near the stand (Ribi 1982). However, Perry and Brusca (1989), working with the similar Pacific S. peruvianum, found that the mangrove's responses to herbivory did not offset the loss of productivity due to Sphaeroma's burrowing. Sphaeroma terebrans effects on marsh vegetation could also encourage marsh erosion (Estevez 1994).

Miller, Milton A. (1968) Isopoda and Tanaidacea from buoys in coastal waters of the continental United States, Hawaii, and the Bahamas (Crustacea), Proceedings of the United States National Museum 125(3652): 1-53

Nair, N. Balakrishnan (1984) The problem of marine timber destroying organisms along the Indian coast, Proceedings of the Indian Academy of Sciences 93(3): 203-223

Pires, Ana Maria Setubal (1982) [Sphaeromatidae (Isopoda:Flabellifera) of the intertidal and shallow depths of the states of Sao Paulo and Rio de Janeiro, Boletim do Instituto Oceanográfico 31(2): 43-55

Richardson, Harriet (1897) Description of a new species of Sphaeroma., Proceedings of the Biological Society of Washington 11: 105-107

Schultz, George A. (1978) Four marine isopod crustaceans from St. Catherines Island with a list of other species from Georgia, Georgia Journal of Science 36: 1-17

Wurtz, Charles B.; Roback, Selwyn S. (1955) Invertebrate fauna of some Gulf coast rivers, Proceedings of the Academy of Natural Sciences of Philadelphia 107: 167-206