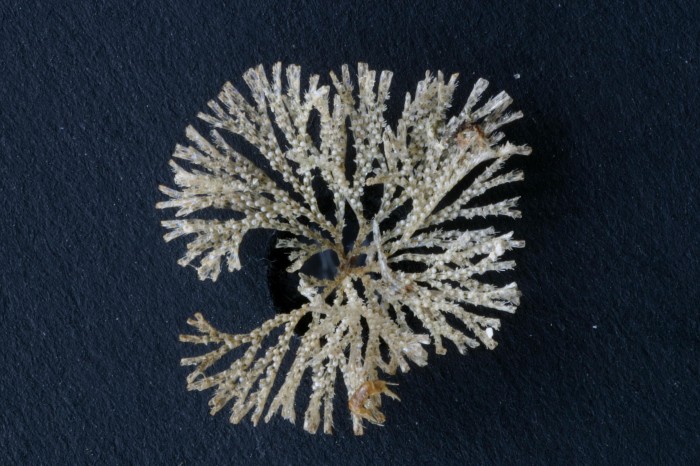 Bugulina fulva was first described from British waters in 1960, but its patchy distribution and tendency to occur in harbors indicates a cryptogenic status in European waters. It is more consistently distributed in the Northwest Atlantic, its probable native range, where it occurs from Cobscook Bay, Maine to the Gulf coast of Florida. Introduced populations have been found in California. It was first collected in San Diego Bay in 2000 and was subsequently identified from San Francisco Bay in 2010. In European waters, B. fulva is a common fouling organism, but no impacts have been reported from its introduced range.

Bugulina fulva forms dense, tufted (not spiraled), yellow-brown colonies up to 3 cm high. The branches are biserial (with zooids in double rows) early in their growth, and become quadriserial distally, forming strap-like branches. The zooids are rectangular, and have three spines on the outer distal corner, and two or three on the inner distal corner. Avicularia are attached to the margins of zooids, just proximal to the spines, and are slightly longer than the width of the zooids, with the beak smoothly curved downward. Each zooid has 13 tentacles (description from: Ryland 1960; Hayward and McKinney 2002; De Blauwe 2009; Winston and Hayward 2012).

The taxonomy of the Bugulidae has recently been revised. Twenty-four species, including B. flabellata, B. fulva, and B. simplex are now in the new genus Bugulina (Fehlauer-Ales et al. 2015). Linda McCann now finds that the California specimens (8/2/18 emaill) do not quite match the description of B. fulva and now favors treating this form as an indentied species.

Bugulina fulva was described from British waters of the North and Irish Seas by Ryland in 1960. Its patchy distribution and tendency to occur in harbors (Ryland 1960; Ryland 1965) indicate a cryptogenic status in European waters (Hayward and McKinney 2002; Ryland et al. 2011). It is known from waters around England, the Netherlands, France (Atlantic coast only), the Bay of Naples, and the Adriatic Sea (Ryland 1960; Ryland 1965; Hayward and McKinney 2002). Bugulina fulva has also been reported from Dakar, Senegal (d'Hondt 1975), and Sao Paulo, Brazil (Ryland 1965). It is more consistently distributed in the Northwest Atlantic, its probable native region, where it occurs from Cobscook Bay, Maine to the Gulf Coast of Florida (Maturo 1966; Ryland and Hayward 1991; Trott 2004; US National Museum of Natural History 2011). However, Winston and Hayward (2012) found specimens of this bryozoan only in the Gulf of Maine.

In the Northeast Pacific, Bugulina fulva was first collected in 2000 in Southern California, in San Diego Bay (Ruiz et al., unpublished). It was initially identified as B. flabellata. In 2010, a specimen of B. fulva was identified in San Francisco Marina, San Francisco Bay (Ruiz et al., unpublished data). Cohen et al. (1998) reported a bryozoan "Bugula sp. 2", resembling B. fulva, from Puget Sound, but there are no other records from Washington State.

Taxonomic Comments- Cohen et al. (2002, 2005), identified Bugulina flabellata, native to the Northeast Atlantic, from samples taken in 2000 in San Diego Bay and Alamitos Bay, Southern California. Ruiz et al. (unpublished data) sampled fouling plates at some of the same locations in both bays in the summer of 2000 and found a bryozoan which resembled B. flabellata and B. fulva. After reviewing scanning electron micrographs of the SERC (Smithsonian Environmental Research Center) bryozoans, Linda McCann identified this bryozoan as B. fulva (McCann, 2011, personal communication). Tentatively, we are assuming that Cohen et al.'s material was also this species. In order to determine which species, or whether both species, is/are present in California waters, further sampling is needed.

As mentioned above, B. fulva is considered cryptogenic in European waters, as well as in Senegal and Brazil.

Life History- Bugulina fulva is a bush-like, calcified bryozoan colony composed of many individual zooids. The zooids feed by extending the ciliated tentacles of the lophophore as a funnel, creating a current, and driving food particles into their mouths. The food is guided along the tentacles and through the pharynx by the cilia. Larger food particles can be moved or captured by flicking or contracting the tentacles. The zooids are hermaphroditic, and produce large yolky eggs, which hatch into lecithotrophic larvae, which are planktonic for short periods (less than 1-2 days). Larvae settle on a substrate and metamorphose into the first zooid of a colony, an ancestrula (Barnes 1983).

Ecology- Bugulina fulva has been found attached to stones, seaweed holdfasts, other bryozoans, and other hard substrates (Ryland 1965; Ryland and Hayward 1991; Hayward and Ryland 1998).

Introduced populations of Bugulina fulva have no reported impacts. However, B. fulva is a common fouling organism in European waters (Ryland 1965).

Cohen, A. N. and 11 authors (2005) Rapid assessment survey for exotic organisms in southern California bays and harbors, and abundance in port and non-port areas., Biological Invasions 7: 995-1002

De Blauwe, H. (2009) [Bryozoa of the Southern Gulf of the North Sea: Guidebook for Belgium and the Netherlands], None , Oostende, Belgium. Pp. 445 pp.

Humphries, Edythe M. (1970) Seasonal settling of the hydrozoa and the ectoprocta in Rehoboth Bay, Delaware, , . Pp.

Maturo, Frank J. S. (1966) Bryozoa of the southeast coast of the United States: Bugulidae and Beaniidae (Cheilostomata: Anasca), Bulletin of Marine Science of the Gulf and Caribbean 16: 556-583