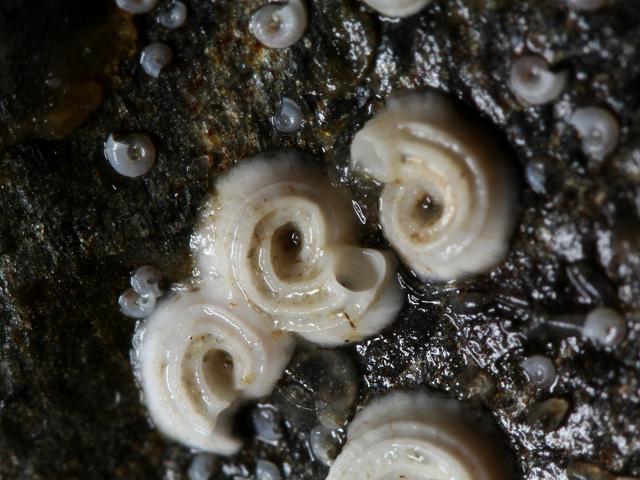 Janua heterostropha is a tubeworm polychaete belonging to the Spirorbinae. It has a broad global range being found in North America, Central America, South America, Europe, Africa, Asia, and Australia. Its native range is difficult to determine; however, some authors believe it is native to Northern Europe where it shows its greatest range of climate, depth and habitat. It is considered introduced in South Africa, Hawaii, and New England (Rhode Island and Massachusetts), but is likely introduced to many other locations. It is found attached to seaweeds, rocks, shells, pilings, and other solid structures. No ecological or economic impacts are currently known for this species.

Janua heterostropha was initially described from France (Appeltans et al. 2015) and later found in waters through much of the world, including the Northeast Atlantic, the Mediterranean and Black Seas, the Caribbean, the coast of Brazil, the Red Sea, sites on the coast of India, Australia, New Zealand, the Pacific coast of Russia (a single collection), the Galapagos Islands, Mexico, and British Columbia (Knight-Jones and Knight-Jones 1975; Ben-Eliahu 1976; Rzhavsky 1991; Wehe and Fiege 2002; Atlas of Living Australia 2015; U.S. National Museum of Natural History 2015). Spirorbin polychaetes have a great potential both for natural dispersal on floating seaweeds, driftwood, and other debris, and for anthropogenic distribution on ships’ hulls (Knight-Jones and Knight-Jones 1975; Knight-Jones and Knight-Jones 1979). Janua heterostropha was found on the hulls of ships in Massachusetts (Woods Hole Oceanographic Institution, United States Navy Dept. Bureau of Ships 1952).

The native range of J. heterostropha is difficult to determine, owing to its potential for natural dispersal on floating wood and algae, and its likely early dispersal on wooden ships. Knight-Jones and Knight-Jones (1975) suggest an origin in the Northeast Atlantic, where it shows its greatest range of climate, depth, and habitat. They also note the scarcity of records on the western sides of temperate oceans. Until recently, despite its worldwide distribution, J. heterostropha had not been found in the Northwest Atlantic (Knight-Jones and Knight-Jones 1977). During a Rapid Assessment Survey in 2000, this polychaete was found at several sites in Massachusetts and Rhode Island (MIT Sea Grant 2003-2008; Museum of Comparative Zoology 2015). It has also been reported as an introduction in South Africa (Mead et al. 2011b) and the Hawaiian Islands (Carlton and Eldredge 2009).

In 2000, Janua heterostropha was collected at Newport, Rhode Island; and Buzzards Bay, Westport, Woods Hole, Plymouth, Duxbury and Gloucester, Massachusetts (MIT Sea Grant 2003; Museum of Comparative Zoology 2015). We presume that it is still established on the coast of New England, but may not have been identified, owing to the taxonomic difficulty of this group of polychaetes.

Worms of the Spirorbinae (currently considered a subfamily of Serpulidae) are small tubeworms, usually growing in tightly coiled, calcareous shells (Blake and Ruff 2007; ten Hove and Kupriyanova 2009). They have a branchial crown of feather-like radioles, as in the other serpulids. The radioles can be folded and withdrawn into the tube. One of the radioles is modified to form an operculum, which acts as a plug when the animal contracts. The peristomium (segment behind the mouth) is folded back to form a collar, which bears uniramous parapodia, with a distinctive set of collar chaetae, with spines or serrations. The collar is the first of three or four asymmetrical thoracic chaetigers.

The tube of Janua heterostropha is coiled dextrally (counter-clockwise when seen from above), and is usually chalky white. The shell is usually tightly coiled, but may become irregular when heavily fouled by algae. Tubes of juveniles may have a median ridge, while adults may have up to three ridges or none at all. The outer edge of the tube often has a sloping flange. Embryos are brooded in the operculum, which has transparent walls. When not brooding embryos, the funnel-shaped operculum contains a pin-shaped talon. The operculum is covered by a distal plate. During brooding, the embryos are visible, and the distal plate becomes flat or convex (sometimes asymmetrical). Early embryos are dark brown, but they later become pale and develop two pairs of red eyespots. As the embryos develop, a second distal plate develops beneath the embryos, and a new brood chamber is formed.

The thoracic membrane of J. heterostropha is not fused dorsally and resembles an open cape. There are three chaetigers in the thoracic region, each with paired bundles of chaetae. Some collar chaetae have a knee-like swelling, with a finely toothed edge; there are capillary chaetae mixed among them, comprising about 11 chaetae in each bundle. The third chaetiger contains sickle-like chaetae, again with a knee-like swelling, but with the fine teeth on the curved blade. The longest abdominal chaetae are sickle-like and longer than the collar chaetae. The animal forms a coil, usually less than 2 mm in diameter. The body color varies – a bright orange form is found in high rock pools in Europe, while a paler form is found in deeper water. Description based on Knight-Jones and Knight-Jones 1974 and 1977, Hayward and Ryland 1990, MarLin 2015.

Notes on the potentially misidentified species: Polychaetes of the subfamily Spirorbinae are diverse. For example, at least 7 genera and 13 species are known from the central region of the West Coast (Blake and Ruff 2007). Only the most closely related species are listed below. They are easily overlooked as a result of their small size, and because many key characters are concealed by the tube-shell. Consequently, records are dependent on specialists, and frequently sporadic.

Janua heterostropha is a small, tube-dwelling, epifaunal polychaete. The worms are hermaphroditic, with male and female gonads. Fertilization occurs outside the body but inside the tube, where the larvae are brooded in an opercular chamber. Self-fertilization can occur but is rare. Larvae are lecithotrophic and can probably begin metamorphosis soon after hatching (Knight-Jones and Knight Jones 1977). Janua heterostropha is a wide-ranging, occurring from the lower intertidal to at least 120m depth, and from cold-temperate regions to the tropics (Knight-Jones and Knight-Jones 1977; Rzhavsky 1991). Spirorbin polychaetes are filter-feeders, feeding on phytoplankton and other suspended particles (Fauchald and Jumars 1979).

Ben-Eliahu, M. N. (1976) Polychaeta cryptofauna from rims of similar intertidal vermetid reefs on the Mediterranean coast of Israel.and in the Gulf of Elat: Serpulidae (Polychaeta Sedentaria), Israel Journal of Zoology 25: 103-119

Gee, J. M.; Williams, G. Brinley (1964) Self- and cross-fertilization in Spirorbis borealis and S. pagenstecheri, Journal of the Marine Biological Association of the United Kingdom 45: 275-285

2003-2008 Introduced and cryptogenic species of the North Atlantic. http://massbay.mit.edu/exoticspecies/exoticmaps/introduced.html