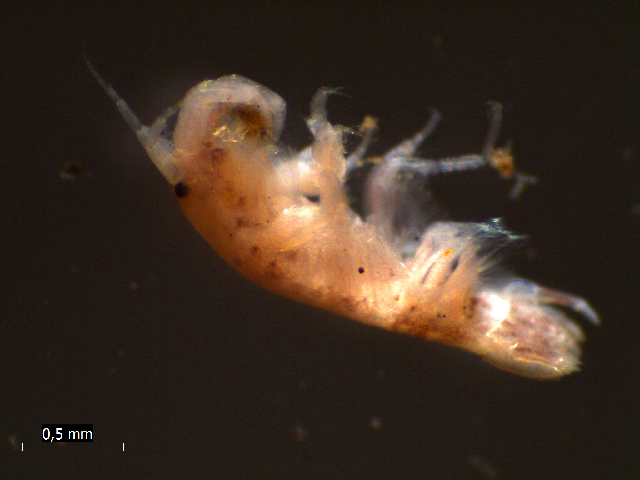 Chelura terebrans is a marine wood-boring amphipod, often associated with isopods of the genus Limnoria. It has a broad global distribution being found from 18 – 61°N in the northern hemisphere and 30 – 44°S in the southern hemisphere. It is thought to be native to Europe with introduced populations on the East and West coasts of North America, Hong Kong, South Africa and New Zealand. It was most likely transported to many locations within the hulls of wooden ships. As a wood-boring pest, it has economic impacts by destroying wooden maritime structures.

* Content for this species is based on the literature and peer review is pending - if you have comments or feedback please contact Paul Fofonoff at fofonoffp@si.edu.

Chelura terebrans is a wood-boring amphipod first described by Philippi from Trieste, Italy in 1839, and redescribed by Allman (1847) from Ireland. Its native range is uncertain, as it has a wide global distribution being found from 18°N – 61°N in the northern hemisphere and 30ºS – 44ºS in the southern hemisphere. In the Eastern Atlantic, it ranges from Norway to Spain, and through the Mediterranean and Black Seas (Kuhne and Becker 1964). Chelura terebrans has been reported from the Northwestern Atlantic (Maine to Long Island; Wallour 1960), South Africa (Mead 2011b), the Northeastern Pacific (Washington to California; Wallour 1960; Carlton 1979), Australia and New Zealand (Kuhne and Becker 1964). It was likely transported to many locations in the hulls of wooden ships (Kuhne and Becker 1964). Chelura terebrans usually co-occurs with the wood-boring isopods of the genus Limnoria (Barnard 1955; Kuhne and Becker 1964) and is largely dependent on these borers for shelter and food, due to Limnoria's superior wood-eating ability.

Chelura terebrans was first found at Woods Hole, Massachusetts (MA) in 1875 by Smith (1879): 'I have repeatedly made careful search of Chelura at many different points along our eastern coast from New Jersey to Nova Scotia, and have examined many pieces of Teredo and Limnoria-bored timber from other parts of the coast, but until 1875, I was not able to discover an individual of the genus.' (Smith 1879). Chelura terebrans was abundant at Provincetown, MA in 1879 (Smith 1879) and also found at Portland Harbor, Maine (ME), Boston Harbor, MA in 1951-52 (Brown 1953; Wallour 1960) and earlier (Atwood 1935, cited by Kuhne and Becker 1964). The southern limits are less clear. Chelura terebrans was collected in Long Island Sound around 1935 (Atwood 1935, cited by Kuhne and Becker 1964; Brown 1953; Wallour 1960). Bousfield (1973) gives the range of C. terebrans as 'south to Chesapeake Bay and northern Florida'. However, no specific records were given in the Clapp Laboratory's wood-borer surveys (Brown 1953; Wallour 1960), museum collections, or local amphipod surveys (Feeley and Wass 1971). We have not found reports of C. terebrans in adjacent estuaries to the north and south e.g. Watling and Maurer (1972) for Delaware Bay, or Fox and Bynum (1975) for North Carolina. The limited range of this species in the Northwest Atlantic and Smith's (1879) early difficulty in locating populations, support the case for introduced status.

The body of Chelura terebrans is depressed and cylindrical, and the posterior margins of its segment are lined with setae. Pleosome segment 3 is produced into a rearward-curving dorsal spine, which is especially large in males. The uropods are large, especially Uropod 3, in which the outer ramus is huge and paddle-like. In males, Uropod 3 is nearly as long as the body.

The head is broad and rounded, and a rostrum is absent. The eye is large and black, and located laterally. The antennae are short. Antenna 1 has a flagellum of 5-6 segments, with a 2-segmented accessory flagellum. Antenna 2 is longer and thicker than Antenna 1, and densely covered with setae. The flagellum consists of a single large, scale-like segment, and two minute segments.

Gnathopod 1 is not greatly enlarged in males or females, but is somewhat thicker, compared to Gnathopod 2. The 6th segment of Gnathopod 1 is longer than segment 5. Segments 2, 5 and 6 of Gnathopod 2 are lined with plume-like setae. As noted above, the rearward-projecting spine on the last pleosome segment is much larger in males than females. Each of the 3 pairs of uropods are dissimilar and also vary between males and females. Uropod 1 has a peduncle 2X the length of the rami, with the inner ramus expanded distally. In females, the peduncle and rami are stouter than in males. Uropod 2 is short, with a wing-like inner lobe on the margin of the peduncle with short rami. In males, the wing-like lobe is larger with more setae than in females. Uropod 3 has a short, broad peduncle, but a very long outer ramus, paddle-like in females, long and rudder-like in males. The telson is small and triangular. The body length is 3.5-6 mm, and the color is pale brown, mottled with pink. Description based on Allman 1847, Smith 1879, Barnard 1950, Bousfield 1973, Lincoln 1979, and Chapman 2007.

Chelura terebrans is an amphipod which usually lives within the burrows of wood-boring isopods of the genus Limnoria spp. (gribbles). Gammarid amphipods have separate sexes, brooded embryos, and direct development. Males and females mature at about 3.5 mm. Copulation takes place within burrows. Broods average about 4 embryos, but can range to up to 15, with as many as 5 broods in a lifetime. Embryo development takes ~47 days at 14C, and 18 days at 26C (Becker 1971), Juveniles develop in their parents' burrow and cannot burrow on their own. Young C. terebrans take ~70-84 days to mature at 20C (Bourdillon 1958a; Bourdillon 1958b; Kuhne and Becker 1964; Becker 1971).

Chelura terebrans is an amphipod which usually lives in association with wood-boring isopods of the genus Limnoria spp. (gribbles), living in the Limnoria burrows (Becker 1971). This amphipod is capable of digesting wood on its own (Green Etxabe 2015) but its impacts on natural wood and human structures appears to be small compared to shipworms and Limnoria. Most of its boring activity consists of enlarging Limnoria burrows (Atwood 1922; Brown 1953; Becker 1971).

Shipping- Chelura terebrans is regarded as an important wood-boring pest, although it is usually only a significant borer in the presence of Limnoria spp., and its damage consists mostly of enlarging Limnoria's burrows and speeding the latter's destruction of wooden pilings (Barnard 1955; Becker 1971; Kuhne and Becker 1964). As destroyers of wooden structures, crustacean borers as a group are regarded as second in importance to shipworms (Atwood 1922; Brown 1953). In the NW Atlantic, substantial populations of C. terebrans were found between Boston and Fisher's Island New York, (near New London, Connecticut), and in Hamilton Harbor, Bermuda. However, boring activity due to C. terebrans was considered minor (Brown 1953).

Herbivory, Habitat Change- Chelura terebrans together with the isopods Limnoria spp. (gribbles) play an important role in the decomposition and recycling of wood. Limnoria spp. burrow much more rapidly than C. terebrans, and the amphipod normally depends on its tunnels for shelter, which it enlarges (Barnard 1959; Kuhne and Becker 1964). The relationship between the isopods and amphipods is mutualistic in part, since C. terebrans cleans feces from the burrows and improves water circulation, but high densities can interfere with Limnoria populations (Kuhne and Becker 1964; Becker 1971).

Bakir, Kerem (2012) Contributions to the knowledge of crustaceans on soft bottoms in the Sea of Marmara, with a checklist, Crustaceana 85(2): 219-236

Christodoulou, Magdalini; Paraskevopoulou, Sofia; Syranidou, Evdokia; Koukouras, Athanasios (2013) The amphipod (Crustacea: Peracarida) fauna of the Aegean Sea, and comparison with those of the neighbouring seas, Journal of the Marine Biological Association of the United Kingdom 93(5): 1303-1327

Feeley, James B.; Wass, Marvin L. (1971) The distribution and ecology of the Gammaridea (Crustacea: Amphipoda) of the lower Chesapeake estuaries., Special Papers in Marine Science 2: 1-58

Nair, N. Balakrishnan; Leivestad, Helge (1959) On the limiting factors in the distribution of two wood-boring crustaceans in Norway., Publications from the Biological Station, Espegrend 27: 1-12

Smith, S. I. (1879) The stalk-eyed crustaceans of the Atlantic coast of North American North of Cape Cod, Transactions of the Connecticut Academy of Arts and Sciences 5(1): 27-138