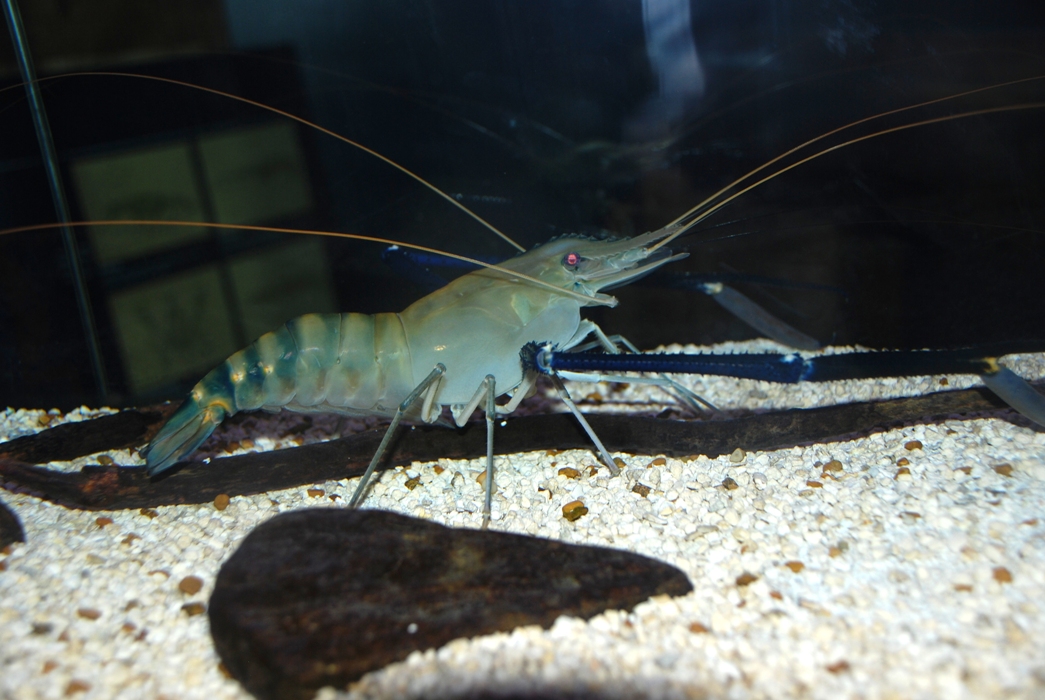 Macrobrachium rosenbergii, known as the Giant River Prawn, is a large catadromous shrimp native to coastal rivers and estuaries from Sri Lanka to Indonesia (Java and Borneo) and north to southern China. Extensive aquaculture of M. rosenbergii began in the 1960s in Hawaii, and became a major economic resource by the 1980s. Major producing countries include the US, Mexico, Peru, Brazil, Iran, India, Thailand, China, Taiwan, Indonesia and Malaysia. Escapes of this shrimp have been reported in Mississippi, Hawaii, Puerto Rico and Guam, and breeding populations are reported in Venezuela, Brazil, and Dominica. Despite frequent escapes, the impacts of Macrobrachium rosenbergii have not been well studied.

Macrobrachium rosenbergii (formerly known as M. dacqueti) is a large catadromous shrimp native to coastal rivers and estuaries from Sri Lanka to Indonesia (Java and Borneo) and north to southern China (Wowor and Ng 2007). Its range is continued eastward by a very similar species, M. wallacei, formerly known as M. rosenbergii. The taxonomic history of these species is discussed in the 'Description' section. These shrimp live in coastal rivers, but spawn and undergo larval development in brackish waters, usually at 3-15 PSU (Hangsapreurke 2008).

Extensive aquaculture of M. rosenbergii began in the 1960s in Hawaii, and became a major economic resource by the 1980s. Major producing countries include the US, Mexico, Peru, Brazil, Iran, India, Thailand, China, Taiwan, Indonesia and Malaysia (Food and Agriculture Organization 2011). Escapes of this shrimp have been reported in the US (Mississippi, Hawaii, Puerto Rico, Guam), and breeding populations are reported in Venezuela, Brazil, and Dominica (Eldredge 1994; Williams et al. 2001; Woodley et al. 2002; Cintra et al 2003; Perez et al. 2007).

Aquaculture of Macrobrachium rosenbergii has been slow to expand commercially in the southern US, because of low production, uncertain availability of seed stock, and wide size variation at harvest. Increased demand for shrimp products, and reduced supplies of wild shrimp have led to increased interest in culture of M. rosenbergii (Tidwell et al. 2005). In May-November 2001, 40 shrimp of this species were caught in Simmons Bayou, Jackson County, Mississippi in waters of 1-12 PSU, near an aquaculture facility (Woodley et al. 2002). We know of no further records of this shrimp in the continental US.

Culture experiments with Macrobrachium rosenbergii started in 1965, with records of escapes and releases on 'all the islands' (Eldredge 1994), but there are no reports of successful reproduction or establishment (Carlton and Eldredge 2009).

In spite of the widespread culture of Macrobrachium rosenbergii, and the frequency of escapes and releases, the number of established populations appears small. This has been attributed to the low aggressiveness of this shrimp (Williams et al. 2001). On the Caribbean island of Dominica, M. rosenbergii was only established in areas where native freshwater shrimps had been eliminated (Alston, 1991, cited by Williams et al. 2001). Breeding populations are also established in Venezuela and equatorial Brazil. In Venezuela, populations are known from abandoned aquaculture ponds, stocked beginning in 1980, on Isla Margarita and in the Gulf of Paria in the Orinoco River Delta in 1996 (Perez et al. 2007). In equatorial Brazil, juveniles and egg-bearing adults were collected in the states of Para, Piaui, and Maranhão, from 2003 to 2009 (Cintra et al. 2003; Loebmann et al. 2010). A possibly established population was reported in southern Brazil in Parana State, in the Rio Guaraguaçu (Gazola-Silva et al. 2007). Silva-Oliveira et al. (2011) found that M. rosenbergii was extensively distributed and breeding in the state of Para, in the Amazon Delta and the coast to the west. Climate modeling indicated that northern Brazil was a favorable habitat for this species, as was tropical West Africa, and that some populations might persist as far north as Florida (Silva-Oliveira et al. 2011).

Many accidental releases of M. rosenbergii have occurred in Puerto Rico, but there are no reports of established populations (Williams et al. 2001).

In Guam, M. rosenbergii was imported for culture from Hawaii in 1974 (Fitzgerald & Nelson 1979). A mass release of this shrimp occurred after a dam burst in a culture facility in 1992 (Eldredge 1994), but the establishment of a breeding population is unknown.

Macrobrachium rosenbergii is a caridean shrimp. Infraorder characteristics include chelae (movable claws) on the first two pairs of walking legs, and the third thoracic segment overlapping the second. Shrimps of the genus Macrobrachium (meaning 'large arms') have the second pair of walking legs greatly lengthened, often equaling or exceeding body length, with very prominent chelae (Williams 1984). In M. rosenbergii, the second walking legs are equal in size and bear many small spines. The movable finger of the claw has very short, fine, downy spinules. The rostrum is long in young males (1.2-1.4 X carapace length), but proportionately shorter in older specimens (0.8-1.0 X carapace length). It is curved somewhat upwards, bearing 11-14 dorsal teeth, and 8-10 ventral teeth. Males reach 320 mm, and females can reach 250 mm (Wowor and Ng 2007; Food and Agriculture Organization 2011). Some of the larval stages of M. rosenbergii are illustrated and described by Uno & Kwon (1969).

The two very similar species M. rosenbergii (formerly M. dacqueti) and M. wallacei (formerly M. rosenbergii) were separated by morphological discriminant analysis of morphometrics (body proportions and numerical features). The most influential factors in separating the species were the height of the base of the rostrum and the number of ventral teeth (18-14, mode = 12 for M. wallacei; 8-15, mode =13 for M. rosenbergii) (Wowor and Ng 2007). See the comments below for the complicated history of names in these two species.

Macrobrachium rosenbergii was originally described from Andai, New Guinea by De Man in 1879. Wowor and Ng (2007), using morphological discriminant analysis have separated the shrimps previously identified as M. rosenbergii into two species, the M. rosenbergii of De Man, ranging from the Philippines and the lesser Sunda Islands to New Guinea and Australia, and M. dacqueti, ranging from Sri Lanka to Java and southern China. Unfortunately, the widely cultured form, in Indonesia, and through the world's tropics was M. dacqueti. Because of the wide use of the name rosenbergii, Wowor and Ng (2007) petitioned the International Commission on Zoological Nomenclature to apply this name to the Asian-West Indonesian form which they have identified as M. dacqueti, and created a new name (M. wallacei) for the East Indonesian-Philippine-Australian species typified by De Man as 'rosenbergii’ (Wowor and Ng 2007). The commission granted this petition in 2010 and the name 'rosenbergii' now applies to the widely reared form, formerly M. daqueti (ICZN Opinion 2253 - Case 3428).

Macrbrachium wallacei
This is the species originally described as M. rosenbergii, native from Indonesia to Australia, and shown to be distinct from the widely reared aquaculture shrimp, formerly known as M. daqueti (Wowor and Ng 2007).

Macrobrachium dacqueti
This species was considered a synonym or subspecies of M. rosenbergii, but was given distinct species status by Wowor and Ng (2007), and found to by them be the correct name for the species widely cultured as M. rosenbergii. It ranges from eastern Pakistan to Sumatra, Borneo and southern China. Given the economic importance of this shrimp, they have petitioned to have the name 'rosenbergii' transferred to M. dacqueti.

Macrobrachium faustinum
In US, collected only in Florida (Bowles et al. 2000)

Macrobrachium heterochirus
In US, collected only in Florida (Bowles et al. 2000)

Life History- In caridean shrimp, the copulating pair is usually oriented at right angles to one another, with the genital regions opposing each other. The modified first and second pairs of pleopods are used to transfer a spermatophore to a receptacle between the thoracic legs of the female (Barnes 1983). After mating, female M. rosenbergii carry broods of fertilized eggs on their abdomen and migrate into brackish water. Females in Brazil had a mean fecundity of 55,000 eggs (Iketani et al. 2016). The eggs hatch into planktonic larvae with feathery appendages, called zoeae. Zoeae of caridean shrimps, such as M. rosenbergii, lack the prominent spines seen in brachyuran crabs, and look quite shrimplike (Food and Agricultural Organization 2011). They go through 11 molts and metamorphose into postlarvae, which have well-developed walking legs, and spend a lot of their time on bottom and vertical surfaces. Postlarvae tend to migrate upstream into fresh water. After a subsequent molt, the body takes on the adult shape. Under aquaculture conditions, larval development to postlarva takes 16 to 35 days (Food and Agricultural Organization 2011).

Macrobrachium rosenbergii is widely cultured in subtropical and tropical regions around the world, usually in coastal areas, with access to brackish water needed for this shrimps reproduction. World production exceeds 200,000 tonnes per year (Food and Agricultural organization 2011). In spite of frequent escapes, 'Macrobrachium rosenbergii is generally considered an ecologically harmless nonindigenous species because of its well documented non-aggressive behavior' (Williams 2001). However, several established populations are known, and their impacts have not yet been studied.

Bowles, David E., Aziz, Karim, Knight, Charles L. (2000) Macrobrachium (Decapoda: Caridea: Palaemonidae) in the contiguous United States: A review of the species and an assessment of threats to their survival, Journal of Crustacean Biology 20(1): 158-171

Magalhaes, Celio and 7 authors (2005) Exotic species of freshwater decapod crustaceans in the state of Sao Paulo, Brazil: records and possible causes of their introduction., Biodiversity and Conservation 14: 1929-1945

Silva-Oliveira and 6 authors (2011) The invasive status of Macrobrachium rosenbergii (De Man, 1879) in Northern Brazil, with an estimation of areas at risk globally, Aquatic Invasions 6(3): 319-328